Jason Segel as Peter in Dispatches from Elsewhere. (Photo by Jessica Kourkounis/AMC)

Remember the first time you saw Rocky? If you’re from Philadelphia, one of the most striking things about the movie was probably how perfectly the film captured the look, the feel and the spirit of the city. Heck, you can view Rocky today and still feel Philly oozing out of it, more than 40 years after its release.

Well, the new Jason Segel show, Dispatches from Elsewhere, may not hold up four decades from now, but the series “gets” Philly in a way that nothing on screen has since Rocky.

It helps that the vast majority of Dispatches from Elsewhere was actually shot right here in Philadelphia, whereas most Philly-set shows and movies grab a handful of exterior shots here for “authenticity” but shoot the balance on some soundstage inside some studio in Los Angeles.

Of course, anybody can set up a bunch of cameras and shoot a TV show in Philadelphia. But Dispatches from Elsewhere doesn’t just visually showcase the city in a beautiful way — though it certainly does that. The show also somehow perfectly captures the grit, the quirkiness, and the general vibe of the city.

Ok, so that’s all great. Philly looks awesome. The show feels like Philly, not like some artificial representation. But is Dispatches from Elsewhere, ya know, good?

AMC allowed me to screen the first four episodes (episodes three and four will air on March 9th and 16th, respectively), and the only thing I really didn’t enjoy was that fact that I have to wait so long for episode five.

I’m not going to get into any major plot spoilers here. AMC strictly forbade any such revelations. Not like they needed to. Spoilers suck!

But basically, the story is about four Philadelphians — played by Jason Segel, Eve Lindley, Sally Field and André Benjamin (a.k.a. André 3000 from Outkast) — who don’t know each other but suddenly find themselves thrust together to unravel a mystery that is either an elaborate game that’s being staged just for fun, or some kind of nefarious conspiracy that needs to be thwarted. 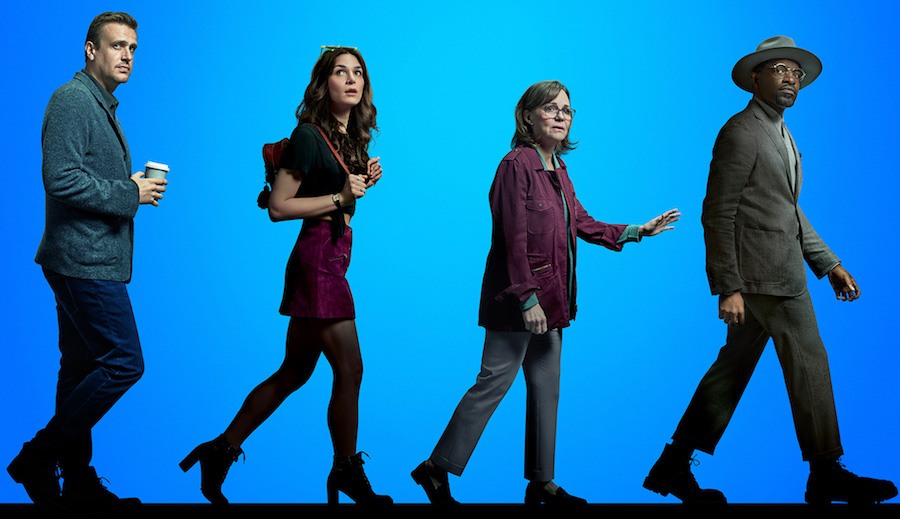 While all four main actors appear together in each of the first four episodes, each episode focuses on the story of one of their characters. Episode one centers on Jason Segel’s character, Peter, a sort of goofy, nerdy type caught up in the mundanity of everyday life. Peter falls for Lindley’s character, Simone, a young trans woman who is the subject of episode two. In the third, we get to know Janice, Field’s character. And the fourth episode — the weakest of the four, but still enjoyable — is about Fredwynn, played by Benjamin.

Segel and Benjamin both do a good job. But in these first four episodes, it’s definitely the women who steal the show. Field and Lindley bring magic to the screen. Their performances are extraordinary. It’s wonderful to see Field popping back up on TV in such a memorable, moving way. (I admit it: she made my eyes tear up in episode three.) And while you may never have heard of Lindley before, you’ll be hearing a lot from her soon. Her career is going to skyrocket after this show. You read it here first.

Philly had so much fun last year watching Segel roam around the city while Dispatches from Elsewhere was in production. And it would have been easy to imagine the results of his stay being less than stellar. Let’s be real, there were more than a few of you out there who assumed the show would suck. Like a local sports team that hires some big shot only to then have a lousy season. But that’s not the case here. Dispatches from Elsewhere is a big winner in my book.

But that’s one person’s opinion. What do you think? Tune in, then email me your thoughts after you see the show. I’d love to hear them.