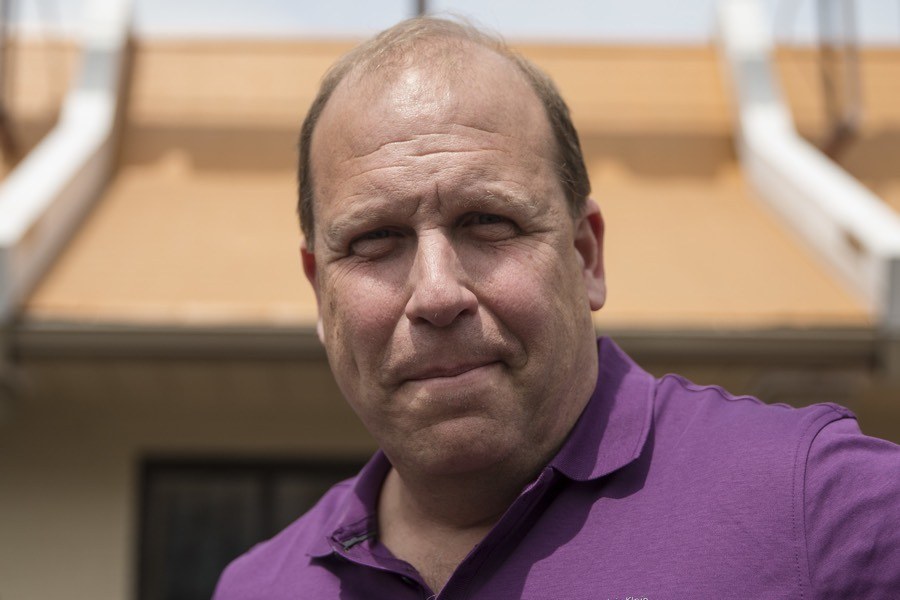 Daylin Leach on May 1, 2015, at a May Day demonstration in Philadelphia. (AP Photo/Matt Rourke)

Daylin Leach is known for lawsuits.

Early last year, the wisecracking state Senator who represents portions of Montgomery and Delaware counties sued a woman who accused him of sexually assaulting her when she was 17 years old and he was 30, alleging defamation. He sued two #MeToo activists who’d shared her story, for the same reason. Then he sued the Inquirer and a reporter who had covered it all.

In the past two years, Leach, who has faced a series of #MeToo allegations, has brushed off repeated calls to resign from a long list of state politicians, including Governor Tom Wolf and the state Democratic Party as a whole. He’s remained in office — but this year, he’s up for reelection.

Given all the calls to resign, it likely comes as no surprise that this month, Leach failed to earn endorsements from the Democratic Party committees in both counties he represents in Harrisburg.

Securing an endorsement from the Montgomery County committee would have boded well for Leach; the county comprises a larger portion of the 17th District, which he’s represented since 2009, than does Delaware County. But the embattled lawmaker fell short of winning the county’s required 60 percent of committee votes at its convention last week. In fact, he earned fewer votes than challenger Amanda Cappelletti, a 33-year-old recent law-school graduate who’s one of five women hoping to beat Leach in the state primary on April 28th. Cappelletti came just five votes shy of the endorsement. With no endorsed candidate, Montgomery County’s will be an open primary. For Leach, the outcome is preferable to one of his opponents receiving a nod, but far from ideal for a three-term incumbent.

That might have been enough of a disappointment for Leach. But a few days later, at the Delaware County Democratic Convention, he placed second again. And this time, Cappelletti was victorious: Democrats endorsed her after using, for the first time, a ranked-choice voting method that chairwoman Colleen Guiney said sped up the county’s overall endorsement process.

Leach isn’t the only one who’s unhappy with the way events have unfolded. On Tuesday night, two days after her committee’s convention, Colleen Guiney says, she checked her phone and noticed four missed calls logged in a 30-minute span, followed by a text that read, “I think you would prefer I didn’t go to the press.”

Guiney says that when she returned the calls, she spoke with Leach’s campaign manager, Leah Wilson, who encouraged Guiney to reverse her committee’s endorsement and instead declare an open primary in the 17th District race, as Montgomery County had. Wilson, Guiney says, warned her that Leach’s campaign was considering legal action and told her, in Guiney’s words, “I don’t ever want you to forget this call.” Wilson disputes Guiney’s characterization of the tone of their phone call and recalls saying that, if this were to become a bigger story, “Just remember I tried.”

“I felt threatened,” Guiney says. “I found the call threatening and disturbing. I tried to explain to [Wilson] that I am not able to [reverse the endorsement]. … I don’t just rewrite rules.”

In a phone call with Philadelphia magazine on Wednesday, Leach confirmed that his campaign staffers had contacted Guiney and that he is considering legal action. He called the county’s endorsement process “blatantly improper” and “unlawful.”

“They changed the rules to get the endorsement,” Leach said. “But we are going to fight that.”

In response, the Delaware County Democratic Committee stands by its 17th District endorsement process but remains “open to” reviewing Leach’s complaints through a formal dispute process, Guiney says. Earlier this week, Leach attempted to submit a dispute with the state Democratic Party, which referred his campaign back to the county party. State party communications director Brendan Welch says county parties typically review endorsement disputes before the state does.

From there, in accordance with a ranked-choice voting method, committee members were asked to rank candidates by order of preference. Candidates included Leach and Cappelletti as well as labor organizer Linda Fields, psychologist Parthenia Izzard, and Lower Merion Democratic Committee member Sara Atkins.

Voting for the 17th District race was conducted in four rounds; after each round, the candidate with the fewest votes was eliminated. Those who had voted for the least-preferred candidate but had also ranked other candidates on their ballots would see their votes transferred to the remaining candidate or candidates they had ranked — again, according to their order of preference. (If they hadn’t listed any other candidates, their votes wouldn’t be transferred.)

Committee member Dan Kraut says that to make this process clear, the endorsement ballots stated that voters should “Rank your choices in preference order. Only rank candidates you would be comfortable endorsing; to be endorsed the winning candidate will need to be ranked (approved of) on 55 percent of the ballots.”

The committee stressed the voting method change to members prior to the election, Kraut and Guiney argue. An email from Guiney to committee members on January 7th states, “Tabulations will be sequentially performed by computer — eliminating the candidate with the least votes each round and reallocating those votes according to the voter’s ranked preference until two candidates remain. Then, as long as the winning candidate is also listed on at least 55 percent of ballots cast, they will receive the endorsement.”

The issue seems to be, at least partially, a matter of interpretation. Leach sees the wording of Guiney’s January email to committee members as “the exact opposite” of how the endorsement process played out. Kraut says it spells out exactly what happened.

But Leach also takes issue with the figure used to calculate Cappelletti’s approval rating. That 128 as the total number of ballots wasn’t adjusted to reflect that, in his view, multiple votes were cast when committee members listed multiple people on their ballots. This is a common argument against ranked-choice voting elections. (For context, former U.S. Representative Bruce Poliquin, a Republican, filed a lawsuit in federal court in 2018 challenging the constitutionality of Maine’s ranked-choice voting system after he lost the state’s 2nd Congressional District race. A federal judge rejected that lawsuit.)

Leach and his attorney, Sam Stretton, also argue that the state Democratic Party was required to sign off on the county’s decision to change its convention endorsement process to a ranked-choice election, according to state party bylaws. But state party communications director Brendan Welch says, “That is not something we do.”

“No county party checks [with us] to approve their own convention rules,” Welch says. “We believe in the autonomy and authority of our county parties, and that means they get to set their own rules.”

Leach argues that his disapproval of the Delaware County endorsement process also entails a “a bigger issue.”

“We saw what happened in Iowa [at the caucus],” Leach says. “People are losing faith in the integrity of their elections, which is the most important thing we have in democracy. When I started reviewing what had happened, it became clear. This is blatantly improper stuff.”

The Iowa Democratic Party has said that the app it used to tabulate and report votes at its caucus wasn’t properly tested and experienced technical glitches, requiring the state to instead rely on paper ballots and delaying the reporting of results into Thursday.

“I don’t know enough about Iowa personally,” Leach says when asked if he believes something nefarious happened at the state’s caucus. “I do see online that Bernie [Sanders’s] people are saying there were some issues, the [Pete] Buttigeig people, the [Elizabeth] Warren people. … They all think that this was an attempt to deny them of something.

“I’ve never been to Iowa in my life,” he adds. “All I’m saying is, [Iowa] is the main thing people are talking about, and to have a local party start doing stuff that is clearly improper feeds into the narrative that we … cannot conduct an election as a party, and I think that’s really troubling.”