We spoke with Mark Alan Hughes, founding director of Penn’s Kleinman Center for Energy Policy, to discuss how city officials could have a say in what’s next for the contentious Southwest Philly site. 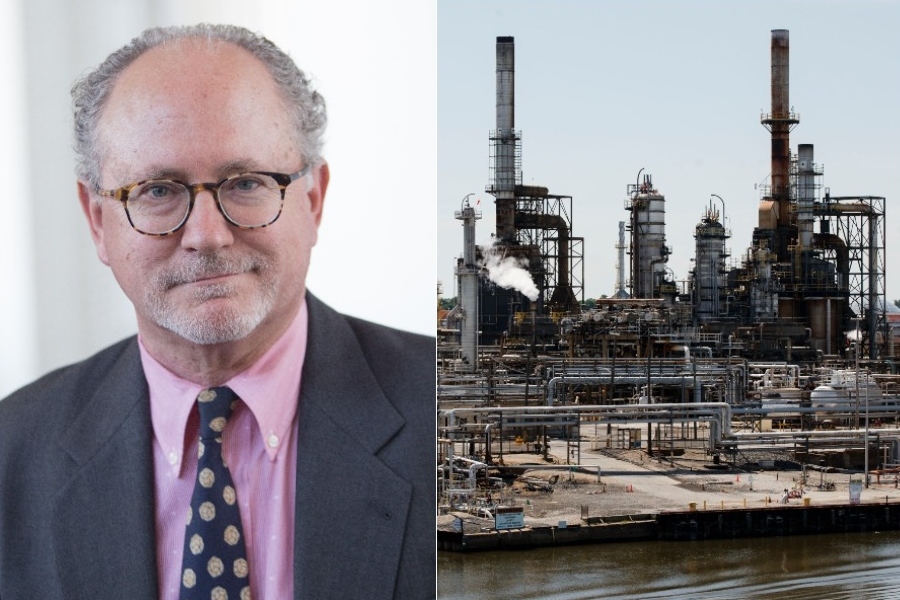 There’s been considerable talk about if (and how much) the city could influence the future of the Southwest Philadelphia site now home to the bankrupt and explosion-damaged Philadelphia Energy Solutions oil refinery complex.

At a City Council hearing regarding the refinery complex last week, Mark Alan Hughes, founding director of Penn’s Kleinman Center for Energy Policy (and former mayor Michael Nutter’s chief policy adviser), testified about how, during the PES auction process planned for January, the city could potentially wield leverage in the name of public interest. We caught up with Hughes to hear more about it.

Does the city have a chance of influencing this bankruptcy court process/auction process?
Yes. The auction itself will be run by PES, but the disposition of the auction has to be approved by the U.S. Bankruptcy Court [in Wilmington]. The court already approved the process of the auction, but one of the changes to PES’s original proposed bidding rules included a role for the city. The city requested, PES agreed, and the judge approved that the city will receive information about the proposals for some limited amount of time before the auction, and then during the auction authorized representatives from the city will be consulted.

So how might the city influence the process then?
Well, that’s one kind of formal set of mechanisms that the city has earned for itself. Less formally but potentially as influential is the city’s announcement [on Tuesday] that it has a preferred set of values: that safety be central to any winning bid and that the environmental impacts of the site will be improved. To the extent that the court will include those considerations in the evaluation of what is the most valuable proposal, that’s a possible source of influence. That would be kind of a path-breaking action on the part of the court, but not completely unprecedented.

What arguments could the city lay out in favor of those values?
A positive version of indirect influence on the bankruptcy court’s thinking [would be], “We really want this, and it’s in the public’s interest, so we hope that you can follow that to a logical conclusion.” A more negative indirect influence on the bankruptcy process would be that the city says, “Well, we have a bunch of [environmental] policy commitments that we have made, and we will defend those. And we will have a very rigorous permitting review process.”

Zoning is too blunt an instrument — you can’t just zone something out of existence, even for good policy reasons, because of property interests. But you can say, “We do not consider this the highest and best use of this site, and we are going to re-zone it now, and your activities will be nonconforming with that zoning. You’re grandfathered as long as you maintain operations, but next time those operations cease for the appropriate period of time, the grandfathering will expire.” There’s lots of things that cities can do to impede things. Sometimes that’s for bad reasons and sometimes it can be for very good reasons.

How could the city use its policy commitments to its advantage here?
For starters, there are three broad areas of commitment that Philadelphia has developed increasing ambition around over the last decade. The first has to do with climate commitments and emissions reductions strategies. The city famously has its “80 by 50” goal, and it and some of its most important partners, like the School District and SEPTA, have made both capital and operating investments in order to meet those reductions targets. Those goals would be burdened by the restart of an emissions-intensive activity at the refinery site, which was the largest single stationary source of greenhouse gas emissions in the city.

Second, public health initiatives. Looking at the environmental hazards that Philadelphia residents face (water safety, lead paint abatement, and the whole Rebuild Initiative), there’s a set of air quality standards that are tied to the impact of healthy exercise, lifestyle, and recreational opportunity investments. Hundreds of millions of dollars over the next five years are being put into the public health system. Those are substantial investments that are also burdened by the restarting of a pollution-intensive activity at that site.

Third, the city has enormous investments every year — local, state, and federal funds — for workforce and economic development, which are burdened by the reactivity of a rollercoaster operation at the refinery site. After substantial public subsidy and the protections of bankruptcy … to have been bankrupt twice in two years is a drain on public resources, precisely for long-term workforce and economic development activity.

You keep using the word “burdened.” Any reason?
When I say “burdened,” I mean it in an economic sense. It might have legal or policy implications, but that’s not the point that I’m qualified to make. I want to be clear: I congratulate the city on its bankruptcy process, that they opened the door and got a formal role and got the judge to say community concerns are appropriate and that he hopes that the city’s role will be sufficient to convey and protect those concerns. That’s a pretty interesting thing for a judge to say.

Does that seem abnormal?
My understanding is that it is. The uncompensated cost of this dead-end and polluting activity has a place in the disposition of these assets. I think it’s not for nothing that we note the judge’s words on this.