Aside from making your property look pretty, planting trees could help reduce the temperature of your neighborhood. 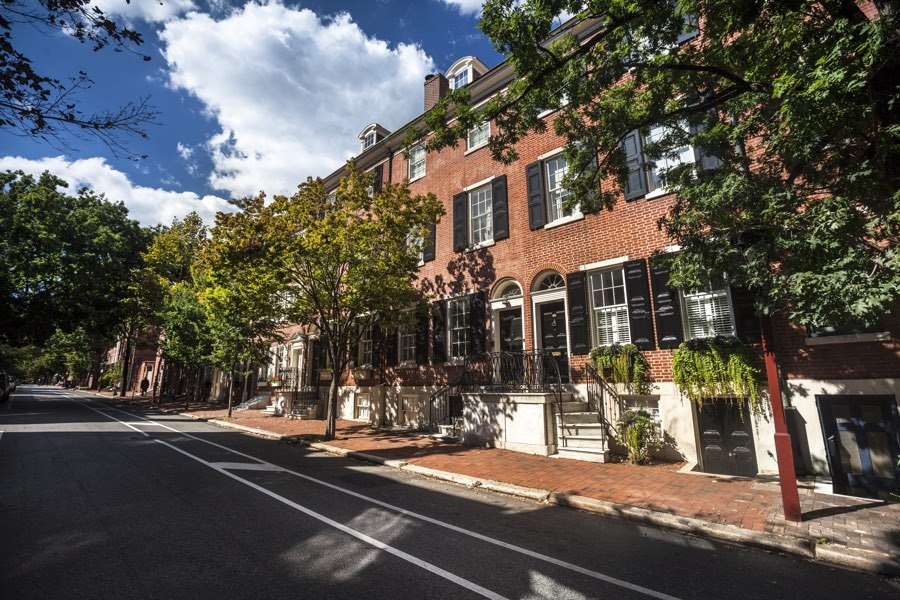 A shady, tree-lined street in Philadelphia. Photo by Pgiam/Getty Images.

Trees and Pennsylvania go way back. Students of Latin will of course know that our state’s name translates to “Penn’s woods.” And William Penn himself, when he was envisaging the city of Philadelphia in the 1600s, wrote that he hoped to design a “green country towne.”

But how to square that concept with the fact that today, one can walk through stretches of Philadelphia with so little green in sight? It turns out, despite our city and state’s wishful wooded heritage, just 20 percent Philadelphia is covered by tree canopy. (That’s less than in neighboring New York City and Washington, D.C. — whose names, you’ll note, have nothing to do with trees.)

But there’s hope for us yet. The city has a goal to increase its tree canopy coverage across every neighborhood to a minimum of 30 percent. The vehicle for reaching that goal has been TreePhilly, a Nutter-admin-era partnership between the Parks and Recreation department and the Fairmount Park Conservancy, which sponsors a semiannual tree giveaway to any city resident who wants one. (TreePhilly’s given away more than 20,000 free trees to date.) There’s just one catch: You must plant the tree on your own private property and take care of it yourself.

Keep in mind, this isn’t strictly about aesthetics. Trees reduce stormwater runoff, and they can help mitigate what’s known as the “urban heat island effect,” the phenomenon by which concrete-clad neighborhoods end up being significantly hotter in the summer months than those protected by sylvan shade. The city says some tree-deprived neighborhoods are an average of 22 degrees hotter than others in town; and just one block of mature trees can decrease the on-the-ground temp by a full nine degrees Fahrenheit.

That ends up being an important reduction, especially once you consider what parts of the city tend to experience the most severe heat island effect. In a recent report, WHYY found that the neighborhoods with the least amount of tree coverage also tend to be among the city’s poorest and often have less access to air conditioning.

TreePhilly, which will give away another 1,075 trees this fall, has typically been something of a free-for-all. Any resident who volunteered to adopt a tree could have one. That’s still the case, but this time around, the organization has partnered with 28 different community groups with the hope that the adopters won’t all be from areas already flush with trees. (In some cases, you must be a resident of a particular ZIP code to get a tree; other events are open to anyone.)

The trees on offer run the gamut: oak, hackberry, apple, peach, magnolia and more. If you’re not quite sure which sort of tree you’re capable of caring for, TreePhilly has produced a helpful little rundown grading how much maintenance each tree requires.

So pick a tree that you want, consult the full list of treevents here, and get yourself registered. What better way to get in touch with your city’s roots?