Philly to Facebook: Get Your Dating Ads Off of Our Sidewalks

Notice those Facebook Dating advertisements stuck to the ground all over Center City? Yeah, so did city officials — and they’re not pleased. 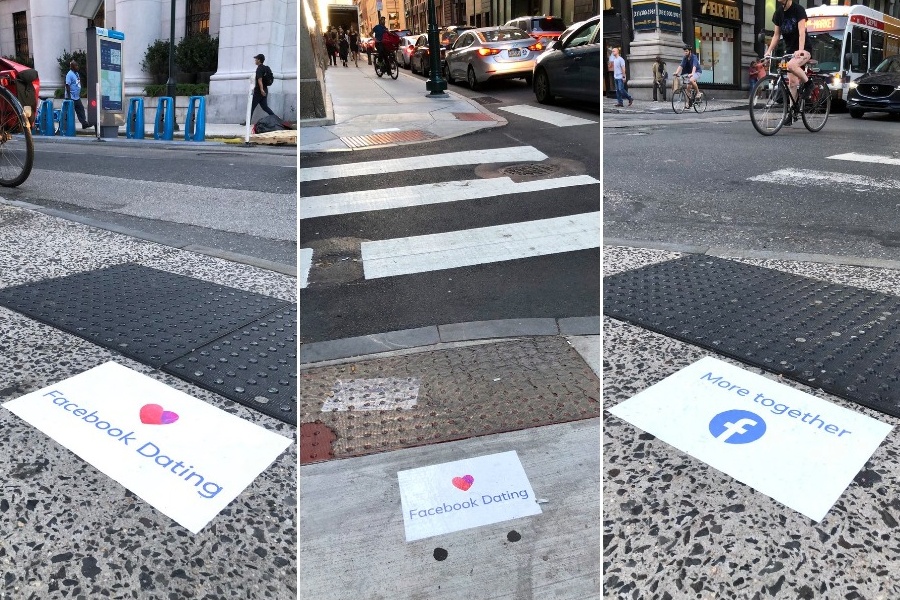 In case you haven’t heard (or if the ubiquitous social media site hasn’t already informed you — or if you haven’t literally stepped on an ad for it), Facebook has launched a new dating functionality. It is, rather predictably, named “Facebook Dating,” and it allows you to fish for future partners or spouses or disappointments while, of course, spreading even more of your precious personal data all over the interwebs.

Someone in Philly (we’re not yet sure who) thinks this is just swell, apparently. So swell, in fact, that they’ve taken it upon themselves to advertise for Facebook Dating, and Facebook in general, all over our Center City streets.

Maybe you’ve noticed the ads popping up like fake little art murals on our sidewalks, at locations like 19th and Market, 18th and JFK and 21st and Arch streets. Philly street art blogger Conrad Benner sure did; photos Benner posted to Twitter this week have drawn responses like “Ew that’s tacky,” and “I guess sidewalks are for sale now?” and, my personal favorite, “Wait till they’ve been soiled with a dozen squished lanternfly corpses.”

Here’s the thing: The Facebook sidewalk ads aren’t actually sanctioned by the city. On Wednesday, we reached out to the city’s deputy communications director, Kelly Cofrancisco, and asked how they got here. She responded: “We all saw these on social media today and have the same questions too!”

Typically, if a company or an organization wants to place big fat advertisements in a public space, like on a sidewalk or on a city building (which is a sad, terrible thing), it must go through a lengthy approval process that involves the Art Commission.

Instead, Cofrancisco said, the Streets Department has no record of Facebook seeking approval for these signs. Though the city “cannot speculate on where the ads came from,” a letter will be sent to Facebook asking that the company remove the ads within 24 hours.

“We do not know exactly who installed the signs on behalf of Facebook as the matter is still under investigation,” Cofrancisco added. “We do know that Facebook did place legal ads on bus shelters for the same campaign.” (Maybe you’ve seen those too?)

So what’s next? If Facebook doesn’t get rid of the signs, the Streets Department will do so and charge a fee for removal, Cofrancisco said. The social media site has yet to respond to a request for comment. Again, it’s not clear if they posted the signs or if some rogue advertising artist did it on their behalf.

Luckily for the company, it looks like a few shining citizens already got to work on the task at hand:

If all of this seems ridiculous to you, know that it wouldn’t be the first time a business has attempted to deploy this kind of tactic. Domino’s apparently tried it out here in 2009. And earlier this month, Twitter launched a sidewalk spray-paint marketing campaign in San Francisco … until city officials ordered the business to remove them immediately because, uh, advertising on that city’s sidewalks is illegal.

Rachel Gordon, a spokeswoman for San Francisco’s Department of Public Works, told the San Francisco Chronicle that the ads could cost Twitter $100,000 or more in fees and fines if the city attorney intervened.

“Our sidewalks are not to be used for commercial billboards,” Gordon said last week. “Twitter has the resources to use appropriate venues to advertise their company.”