Pennsylvania Ranks Third Among States for Number of Bigfoot Sightings

The Appalachians are the place to go if you’re looking to spot a beast (or two) this weekend. 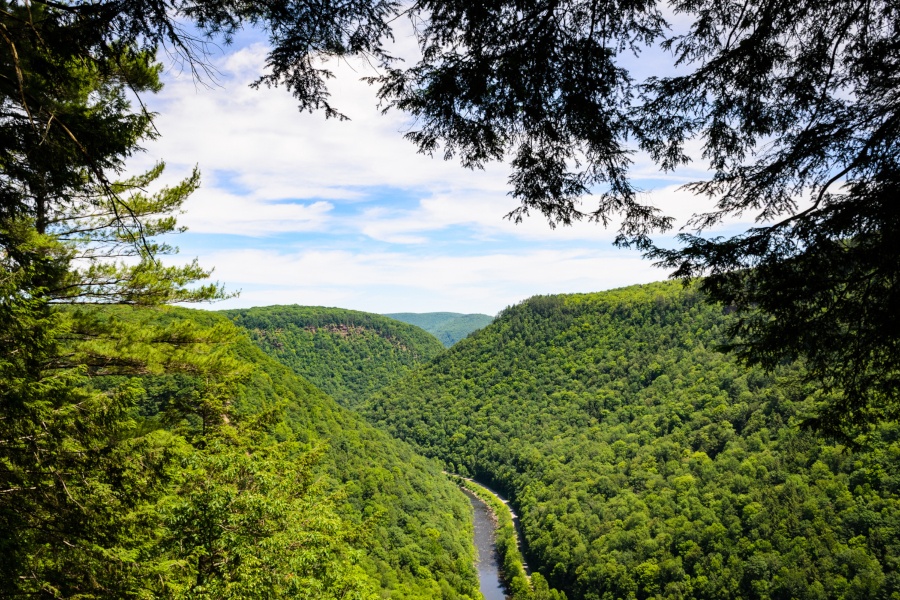 All those woods where Bigfoot could be hiding. | Pennsylvania’s Pine Creek Gorge by zrfphoto via Getty Images

Pennsylvania is a haven for Bigfoot, apparently.

That’s according to The Travel Channel and the Bigfoot Field Researchers Organization, which deems itself the “only scientific research organization exploring the bigfoot/sasquatch mystery.” The groups recently combed through BFRO’s list of Bigfoot sightings and testimonies to produce a ranking of “The 8 Places to See Bigfoot Right Now.”

Maybe you’re delighted to hear this. Maybe you’ll even jump in your car this weekend and head out to the Appalachians to spot yourself some Bigfoot. (That’s where most of the sightings take place, of course. It’s an ideal Bigfoot habitat.)

On the other hand, maybe you’re a little concerned about Pennsylvania and the number of folks living here who think they’ve spotted Bigfoot. To which I’ll respond: Hear them out. I am quite possibly one of those people. I must’ve been about ten years old when I was walking down a wooded path in Vermont, and all of a sudden, emerging from the trees on my left periphery and dashing across the trail to those on my right — and pausing to stop for just a second — sprang this tall, thin, hairy, upright creature.

Was it a bear? Maybe. I’m not totally ruling that out. Bears can sometimes walk like humans. But it didn’t really look like a bear. And I wasn’t just seeing things: This I know, because my Dad was walking with me. And a second or so after the thing darted out in front of us, he turned and said to me, “Did you just see that?”

So there you have it. A semi-Bigfoot sighting coming from a mostly normal human. It does happen! Turns out there were 23,000 sightings reported from across the country and analyzed by The Travel Channel and BFRO for their list.

Here’s what they said about Pennsylvania:

“Not surprisingly, the Appalachian range has a high number of Bigfoot sightings. With hundreds of miles of connected forestlands, it’s a prime space for a large animal to go undetected. One of Pennsylvania’s most interesting cases involves a mountain biker who, while taking a rest, thought he was watching the back-end of a bear as it rummaged through a downed-tree. The biker’s curiosity turned to shock when the animal stood up. What he thought was a bear was actually a giant 7-foot bipedal creature covered in black hair.”

With 1,068 sightings, New York didn’t fall far behind Pennsylvania. If you’re trying to spot Bigfoot up there, head to Whitehall, a town near Lake George. Apparently the area has so many Bigfoot sightings that Bigfoot is its official town animal.

If you’re really into Bigfoot sightings, you may want to check out Bigfoot in Pennsylvania: A History of Wild-Men, Gorillas, and Other Hairy Monsters in the Keystone State. Or browse the BFRO’s website. They’ve got everything you need to know about Bigfoot, including the answers to your most burning questions, like: “Wasn’t this all shown to be fake?” (Hell no!) Or, “What is a bigfoot?” (“‘Bigfoot’ was a journalistic term generated in the middle of the last century during a rash of sightings in Northern California.”) And, “How come there’s no Bigfoot roadkill?” (“The short answer: Bigfoots are extremely rare and extremely cautious — so much so that the odds of a roadkill have not caught up with any yet.”)

And finally, you’ll be pleased to know that the organization has plenty of tips on how to collect evidence of a Bigfoot, for those who plan to venture out to the Appalachians soon.