Boycotting Chick-fil-A? Here Are 243 Other Companies You Might Want to Avoid

Some prominent Philly companies — as well as familiar national brands like Armani, H&M, Kate Spade, Bed Bath & Beyond, and Outback Steakhouse — don’t get high LGBTQ marks in a just-released report. 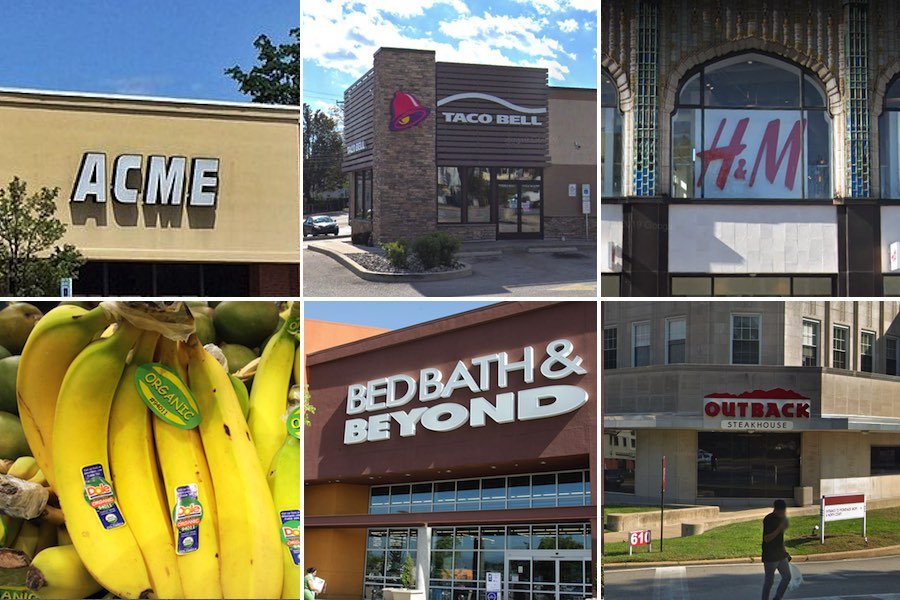 Dole bananas and Bed Bath & Beyond photos via AP. All other photos via Google Maps.

You know how your friends are always annoying you by sharing links from years ago as if they are new stories? That’s what I thought happened the other day when somebody posted a story about LGBTQ groups and their allies boycotting Chick-fil-A. I assumed that it must have been coverage from 2012, when folks boycotted Chick-fil-A over some of the company’s charitable contributions and policies and comments that Chick-fil-A’s CEO made about gay marriage.

But no. This Chick-fil-A boycott is new.

You see, the website Think Progress recently revealed that Chick-fil-A’s charitable foundation donated close to $2 million to three groups with “a record of anti-LGBTQ discrimination.” Among those groups: the Salvation Army. (You didn’t drop a fiver into the bucket outside the mall last Christmas, did you?)

In response, Chick-fil-A has said that it isn’t trying to push a political or social agenda; the donations were for youth camps and other educational programs, it argued. But the furor isn’t letting up.

New York magazine picked up the Think Progress report. Then, the mag pushed a Chick-fil-A boycott by directing readers to 17 great chicken sandwiches you can buy in New York City that aren’t from Chick-fil-A — sandwiches “you can eat without fear that you’re also, however indirectly, supporting our nation’s hate-mongers.”

And since then, Chick-fil-A is having even more problems. San Antonio City Council just decided to ban Chick-fil-A from that city’s airport, and now officials are scrapping plans to let Chick-fil-A open at Buffalo’s airport. (Yes, there is a Chick-fil-A at Philadelphia International Airport, and no, I haven’t seen any petitions to kick them out. Yet.)

OK, so hate on Chick-fil-A all you want. It’s your prerogative. But if you’re going to boycott Chick-fil-A over issues such as these, there are probably some other companies out there you’ll want to boycott as well, including some headquartered right here in the Philadelphia area.

The Washington, D.C.-based Human Rights Campaign, one of the country’s largest LGBTQ lobbying and advocacy groups, makes it easy.

Last Thursday, the HRC published its annual Corporate Equality Index, in which the group scores companies on their treatment of LGBTQ people. The index includes all Fortune 500 companies, the AmLaw 200 law firms, and hundreds of other publicly and privately held businesses that HRC chooses. The index is largely based on responses that the companies provide to an HRC survey, and when companies do not respond, the HRC relies on other forms of research.

According to the HRC, these are the four categories that the index uses to determine the scores:

Comcast NBCUniversal slid from 100 last year to 90 this year due to policies surrounding same- and different-sex domestic partner medical benefits. And there are some other local companies that, like Comcast, didn’t pull off a perfect score but that did manage a passing grade, which the HRC says is anything 60 or above.

Below are all of the companies in the report with failing HRC scores. An asterisk after a company’s name indicates that the company did not respond to the HRC’s survey. You can view the full HRC report here.

Short version: If you are going to boycott Chick-fil-A, you might have to reconsider shopping at Bed Bath & Beyond, Acme (Albertsons Companies), and H&M; eating at Outback (Bloomin’ Brands) and Taco Bell (Yum China Holdings); living in Toll Brothers McMansions; feeding the kids Dole bananas and pineapples; using ADT for your security company; and buying spark plugs at Pep Boys, which is headquartered in Philadelphia.