Happy Spring: Peeps-Flavored Coffee and Donuts Are Coming to Dunkin’

The one-two sugar punch will be available starting on April 1st. 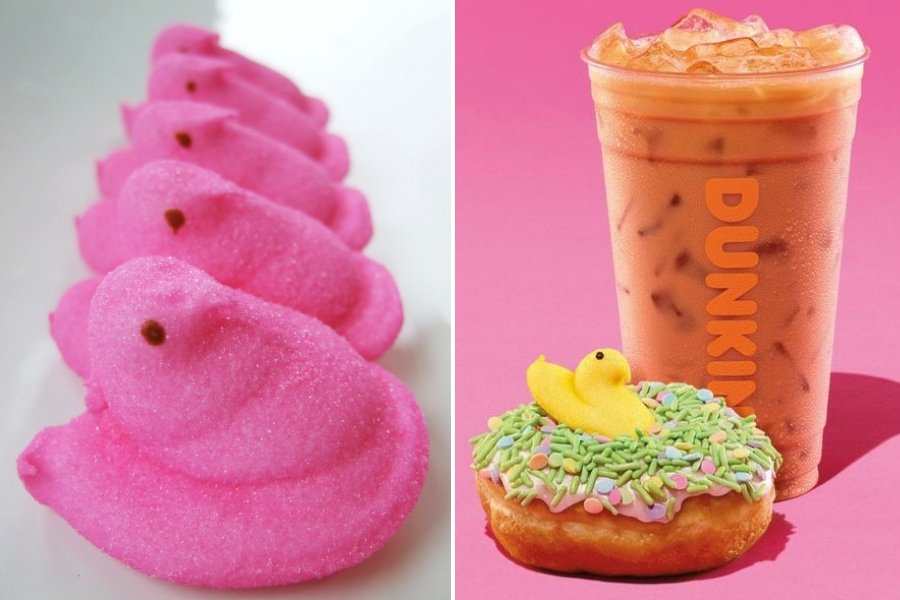 Peeps lovers are getting a lot of good news this spring.

In January, the Bethlehem factory behind the small marshmallow chicks announced that it would open its doors to the public for the first time ever this April (but, in true Willy-Wonka fashion, only to a lucky sweepstakes winner and three friends). And now, Dunkin’ (née Donuts) has announced that it will soon offer Peeps-flavored coffee and donuts.

What to expect of the marriage? The “Peeps Donut” will feature white icing and green and egg-shaped sprinkles — plus a mini yellow Peeps marshmallow on top, as is obligatory. Dunkin’s “Peeps Marshmallow Flavored Coffee” willl bring  “the delightful, creamy taste” of classic Peeps to several Dunkin’ beverages: hot and iced coffee, espresso drinks, frozen coffee and frozen chocolate. Both items will be available at Dunkin’ locations nationwide for a limited time this spring, starting on April 1st.

As part of the collaboration, Dunkin’ and Peeps are hitting the road together for two days next month. From April 2nd to 4th, Dunkin’ will drive a “custom-sculpted coffee car” (we’re really not sure what a coffee car looks like) alongside what’s known as the PEEPSMOBILE, starting in Bethlehem and ending in Quincy, Massachusetts, where Dunkin’ was born. Never seen the PEEPSMOBILE? It looks exactly like what you’d expect.

The first 250 guests to flood the cars wherever they arrive will be offered a free small Peeps Marshmallow Flavored Iced Coffee, a Peeps Donut, and other giveaways. You can follow @Dunkin on Instagram for information about where the cars will show up. (No word yet if Philly is on the itinerary.)

The coffee chain is offering a few other spring items as well, including a Chocolate Cherry Cold Brew, a Sweet Sriracha Bacon Breakfast Sandwich, Iced Tea Lemonade and Frozen Lemonade. But we’re most looking forward to the Peeps, of course.

Pennsylvania’s Just Born Quality Confections began making peeps in 1953 — and the factory now churns out around 2 billion marshmallow chicks per year. (The company is also responsible for treats like Mike and Ike, Peanut Chews, Hot Tamales, and other candy.) We spoke with CEO Ross Born last year about the right way to eat a Peep and more.