Jaleel McFadden, who has worked for Whole Foods for 22 years, says that a company rule allowed white supervisors to block him from promotion for a decade. 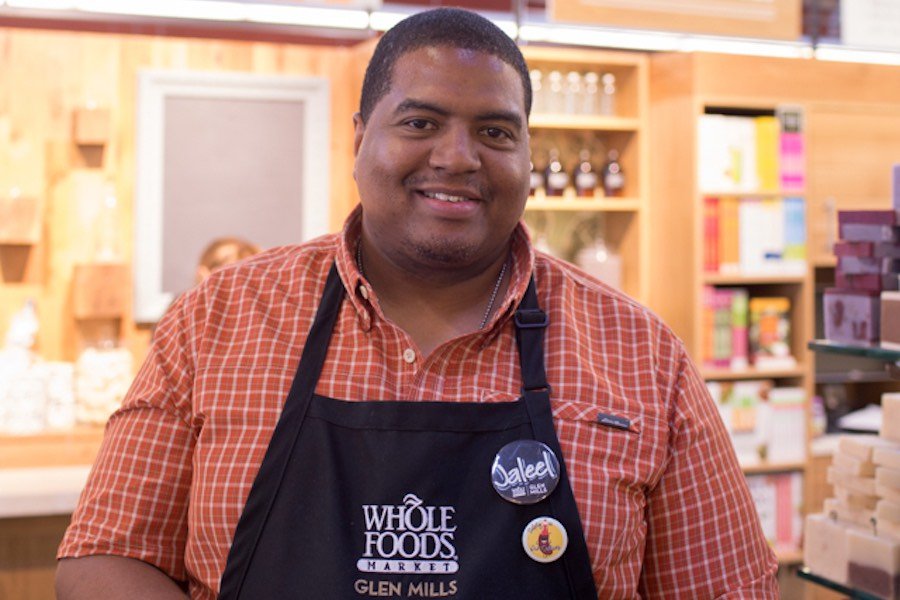 In the past several years, Whole Foods has been hit with a series of racial discrimination lawsuits and complaints across the country, including a suit by a former Florida Whole Foods employee that claimed black workers were being fired disproportionately, and allegations from California that Whole Foods racially profiles its customers.

Now a longtime — and current — Whole Foods manager in Philadelphia has filed a federal lawsuit against the company, claiming that its promotion policy routinely discriminates against black employees trying to climb the corporate ladder.

Jaleel McFadden, a 45-year-old Delaware County resident, has been working for Whole Foods for 22 years.

A graduate of what was then known as the Restaurant School in West Philadelphia, McFadden started out at Whole Foods as a baker in 1997.

In his lawsuit, McFadden claims that his performance as an associate store team leader was “exemplary” and that he received numerous merit-based raises and bonuses. But time and time again, the suit alleges, he was thwarted by a series of supervisors when he wanted to pursue a promotion.

When McFadden went to Whole Foods management to ask what more he had to do to be eligible to apply for a store team leader job, he says the company told him to mentor with a store team leader in Glen Mills. White employees in his position were not required to take part in similar mentorships, the suit says.

After two years at the Glen Mills Whole Foods, McFadden says he stated his interest in a store team leader position that had opened up at the Whole Foods in Marlton. He says that his manager responded by telling him not to approach him so “aggressively” about the position. McFadden maintains that there was nothing aggressive about his approach.

He alleges that management blocked him from applying to the Marlton store and then again when he wanted to apply to be the store team leader at the Whole Foods in North Wales. McFadden claims that his Glen Mills manager, who was white, instead supported a white employee, who wound up getting the top job in North Wales. The lawsuit states that the employee in question was less experienced than McFadden.

After that — this was around July 2016 — McFadden again expressed his concerns about being denied the opportunity to apply for a store team leader position, and he says that management told him that if he transferred into Center City and helped open the big new Whole Foods on Pennsylvania Avenue, his odds of promotion would increase.

McFadden says he complied but that when he thereafter wanted to apply for another store team leader job in South Jersey, his manager in Center City pushed through a white employee instead — an employee that the lawsuit claims was “substantially less qualified” than McFadden.

Finally, McFadden had enough. In March 2018, he filed a complaint with the Equal Employment Opportunity Commission, which eventually indicated that its findings were inconclusive.

Shortly after he filed his complaint with the EEOC, however — and after a decade of trying to get a promotion with Whole Foods — the company finally allowed him to apply for a job as store team leader, and he got the job last December.

The lawsuit, which seeks unspecified damages, accuses Whole Foods of discriminating against McFadden for years because of his race and of violating his rights and those of other black employees looking for advancement. The suit goes on to claim that Whole Foods violated the Pennsylvania Human Relations Act and Philadelphia’s Fair Practices Ordinance.

A Whole Foods spokesperson told Philly Mag that the company does not comment on pending litigation, but they did issue the following statement: “Whole Foods Market does not tolerate discrimination of any kind. We value and celebrate diversity in a culture of respect and empowerment.”