Prosecutors say that Narducci loaned a man money at usurious rates and then physically assaulted him when he couldn't pay up. A co-defendant has been charged as well. 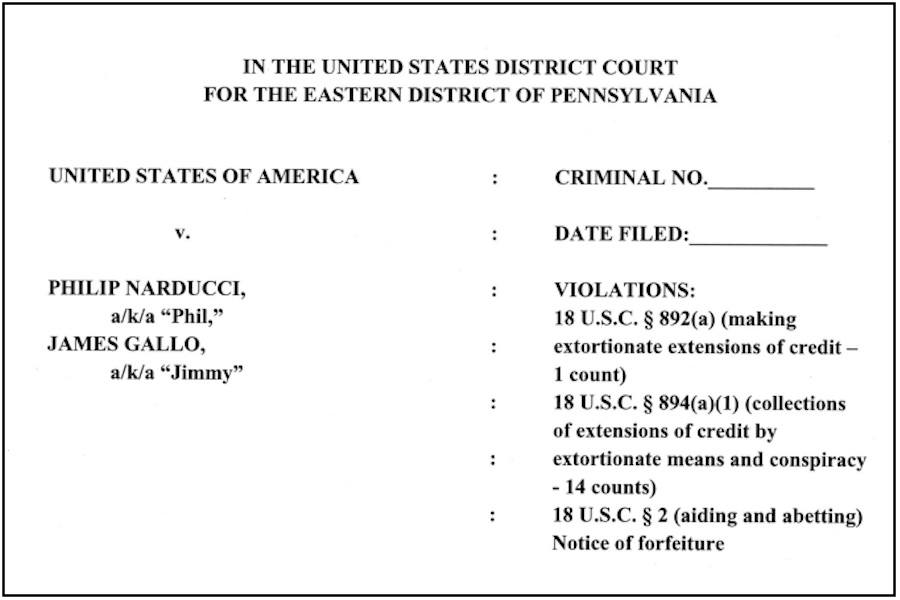 It has been a busy week for the feds in Philadelphia. On Wednesday, the Department of Justice filed an explosive indictment against longtime union leader John “Johnny Doc” Dougherty, and today, prosecutors have announced the arrest of reputed Philly mobster Phil Narducci in a loan sharking case.

Narducci, a South Philadelphia resident, has been charged with making extortionate extensions of credit and conspiracy, among other offenses. Also charged in the case was James Gallo, whom the feds describe as Narducci’s “associate.”

According to the indictment, Narducci, whom prosecutors describe as a “Philadelphia La Cosa Nostra member,” loaned an unnamed person $10,000 in January of 2018. By June, say the feds, that person owed Narducci $115,000.

Fast-forward to October. Prosecutors say that the debtor was unable to make his required payments on the “usurious” loans, so Narducci allegedly confronted the man at his workplace. The feds claim that Narducci made a hand symbol of a gun, allegedly saying, “This is what I do if you don’t pay.”

Later that month, when the man still couldn’t make the necessary payments, Narducci is accused of assaulting him by throwing him across a room and then against a car.

Two days later, on October 27th, Narducci is said to have told Gallo to collect on the loans. Gallo is accused of going to the man and saying of Narducci, “He’s a killer, you fucking idiot… he’s killed fucking eight people.”

The feds say that Gallo collected 13 payments since October, the most recent one being for $1,000 on January 24th.

According to prosecutors, each charge against the two men carries with it a maximum penalty of 20 years in prison, if they were to be convicted.

Narducci and Gallo were both arrested on Thursday morning, and they were expected to appear in court on Thursday afternoon.