Superheroes Are Taking Over the Franklin Institute This April 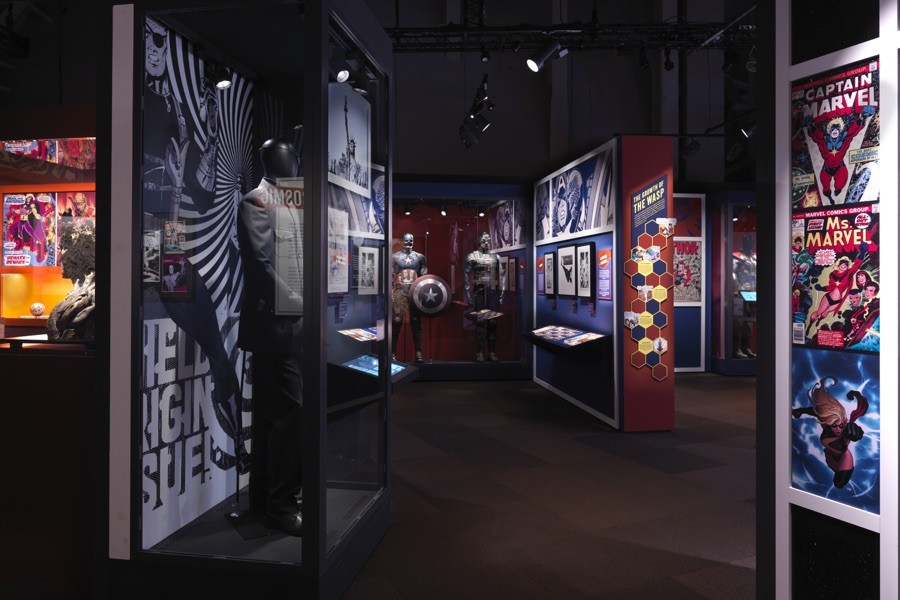 Step into a world of heroes at the Franklin Institute Marvel exhibit. No villains, please. Photo by Jonathan Pulley/Museum of Pop Culture.

There’s arguably no better time to be a lover of superheroes than the present. They’re featured in new blockbuster movies premiering seemingly every other week, more binge-worthy Netflix original series than there are hours in the day, and comics written by genuine literary stars. And now, coming to the Franklin Institute this April, a new exhibition dedicated to 80 years of Marvel’s history.

Related: Your Guide to Science, History, and Art Museums Around Philadelphia

At the exhibit, which is making its East Coast debut following an 11-month stint in Seattle, you’ll be able to catch some of Marvel’s greatest hits in the form of more than 300 objects — ranging from bona fide historic artifacts (original draft superhero drawings from folks like Kirby) to the more contemporary (a life-size sculpture of Spider-Man).

We’ve broken down some of the must-see items.

For the celebrity lovers

You may never get closer to a dreamy Hollywood celeb than at this exhibit. The Franklin Institute’s got original movie costumes worn by three of the biggest Chads and Chrises in the biz: Chadwick Boseman’s Black Panther suit, Chris Evans’ Captain America costume, and Chris Hemsworth’s Thor garb.

(Sorry, Chris Pine fans. You’re out of luck. He was in Wonder Woman, and that’s DC Universe. This is Marvel.) 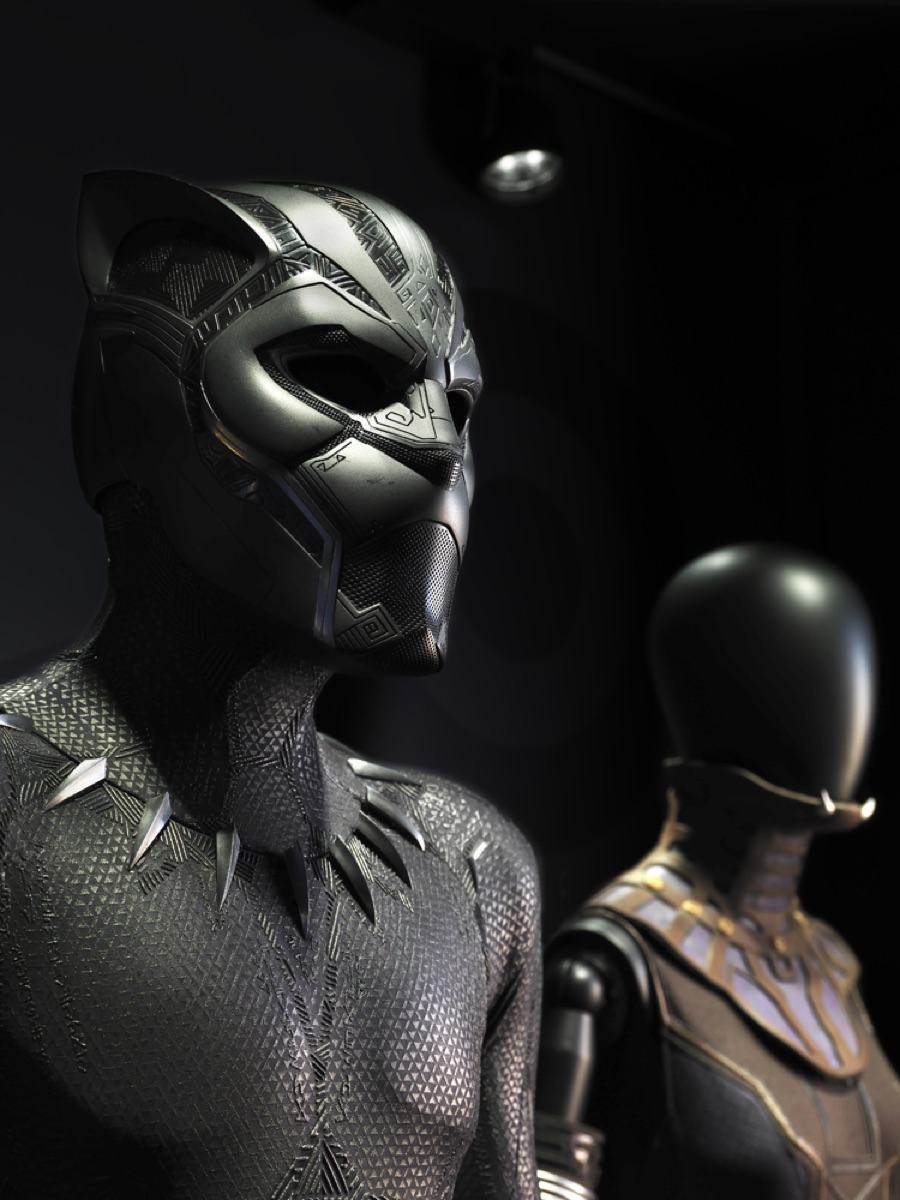 No, Chadwick Boseman is not in there. But you will see his costume from Black Panther at the Franklin Institute Marvel exhibit. Photo by Sandro Vanini/Museum of Pop Culture.

For the comic book purists

This is a museum, after all, so naturally there will be archival materials. Examine early hand-drawn sketches of heroes like Black Panther before they went to print, and compare them to the final product. 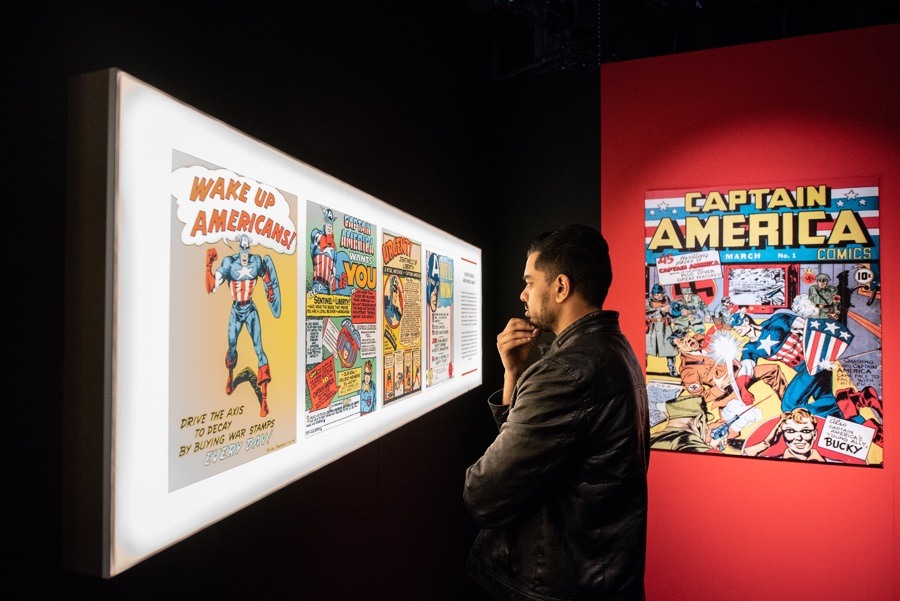 Note the original Captain America cover on the right, drawn by Jack Kirby, which features Hitler taking a fist to the face, which you can check out at the Franklin Institute Marvel exhibit. Photo by Jonathan Pulley/Museum of Pop Culture.

If you went to a museum and didn’t post about it, did it really happen? There are photo-ops galore at this exhibit, including sections dedicated to particular superheroes, as well as a fancy digital installation where you can get your Tony Stark on — and be transformed (alas, only temporarily) into Iron Man. 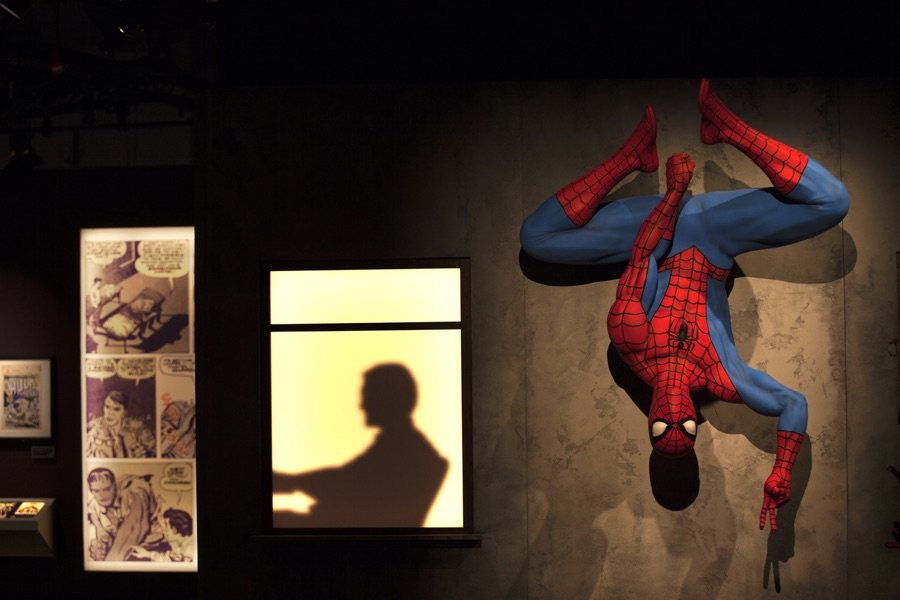 This would be a good selfie to take at the Franklin Institute Marvel exhibit. Photo by Sandro Vanini/Museum of Pop Culture.

Look, everything here is going to be pretty kid friendly. But the life-size sculptures of heroes like Spider-Man and The Thing are a nice touch indeed.