Amtrak’s 30th Street Train Board Has Flipped Its Last

For now, the iconic display is headed to a railroad museum — but an Amtrak official hinted at its possible return. 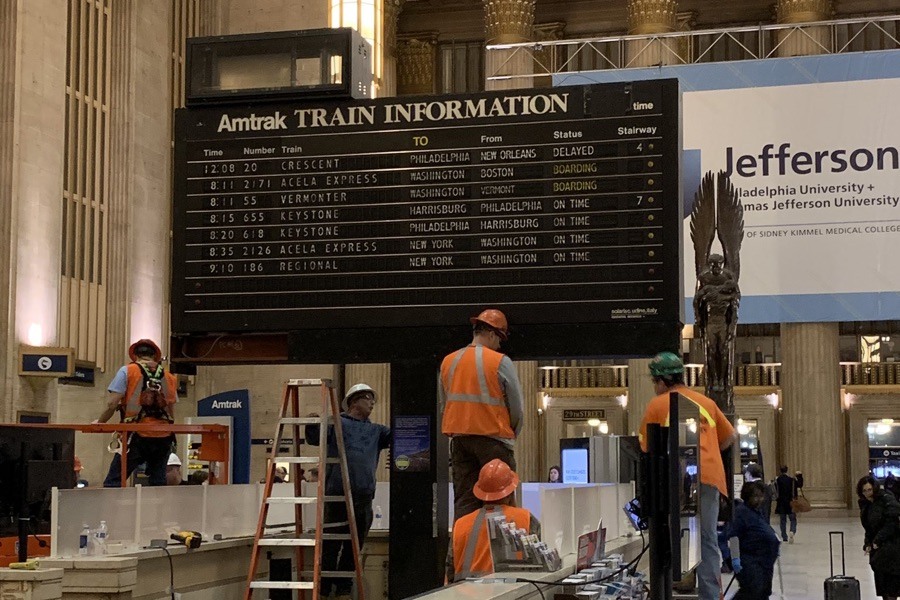 If you are a fan of fine Italian craftsmanship, analog technology, beauty, and nostalgia, then today is a sad day indeed: Amtrak has begun removing the historic Solari flipboard from 30th Street Station.

The famous sign, which has listed train departure times at 30th Street since 1971 — and itself once replaced a chalkboard — has been under threat for a while now. Amtrak first signaled that the Solari board’s days were numbered back in 2016.

The justification for the sign’s removal is not entirely ignoble — Amtrak says the Solari flipboards aren’t compliant with the Americans with Disabilities Act because they don’t provide real-time updates on things like train delays.

But Inquirer architecture critic Inga Saffron reported back in December that while Amtrak has budgeted $11 million for a digital replacement, Solari could rehab the existing board for a mere $100,000. Or, a local company called Oat Foundry could produce a brand-new mechanical board, with digital integration, for $6 million.

Here was the scene at 30th Street on Thursday night, as workers began the process of dismantling:

It’s so hard to say goodbye…

Late last year, it appeared there might be a knight in shining armor to save the sign, in the form of U.S. House Rep. Brendan Boyle. Boyle reached out to Amtrak about possibly keeping some version of a flipboard sign at the train station, and said the company was receptive. (Boyle issued a plea — Machiavelli might have called it a veiled threat — to Amtrak officials in a January interview with the Inquirer: “Frankly, as someone who works on appropriations for Amtrak, they have every incentive to continue to work with us.”)

The final fate of the sign has yet to be determined. According to a joint statement Boyle issued with Amtrak last night, the Solari board — which was the last of its kind in the Amtrak system — will move to the Railroad Museum of Pennsylvania in Strasburg for the time being.

An Amtrak official seemed to imply in yesterday’s release that the sign could eventually make its way back to 30th Street as something of an antique, mentioning plans for it to be “reincorporated into the station for everyone to enjoy.”

The Solari board should be fully removed from 30th Street by the end of the weekend. On Friday morning, onlookers gathered to catch one final glimpse.

Many who are not even taking any trains out of 30th Street station are coming by to take pictures of the Amtrak clickety-clack flipboard. Amtrak staffer tells FOX 29 News it’s been costing $600,000/yr to maintain&it breaks down”all the time” so needs to be replaced @FOX29philly pic.twitter.com/7jDaZ7f5QD

Amtrak says the replacement display will be installed in February — though it didn’t elaborate on what form that would take. In the interim, the company has installed television displays to help passengers determine their departure time.

But last night, even as the Solari took its dying breaths, one thing remained the same: It kept on flipping.

There is something extremely cruel about the sign still spinning while they actively dismantle it pic.twitter.com/zeFHR156dL