"SHAZAM!" takes place in Philly — so naturally, it showcases the best of our city transportation. 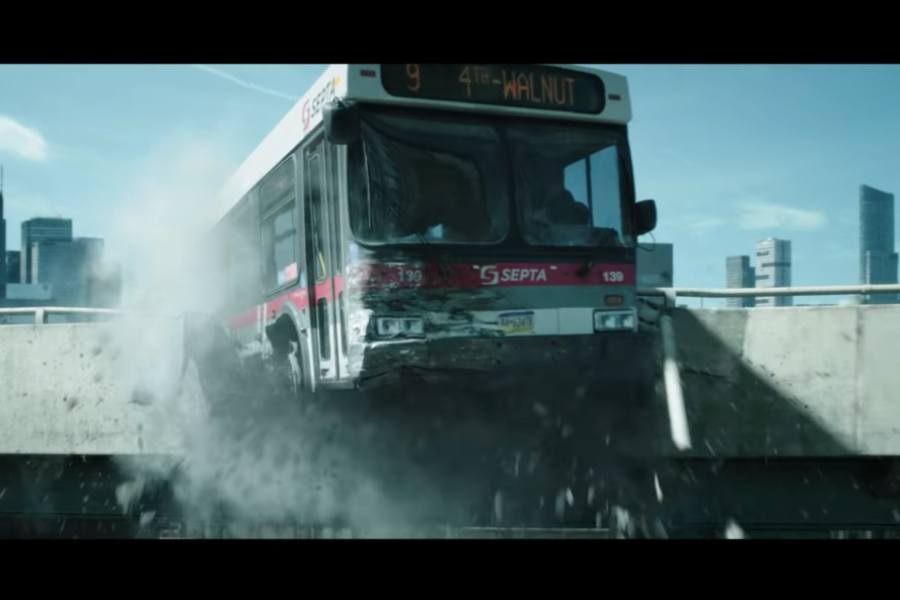 A still from the new SHAZAM! trailer. | Image via Youtube

It seems like a lot of movies are being filmed (or taking place) in Philly right now. Take M. Night Shyamalan‘s latest flick, Glass, for example, or The Upside, starring Kevin Hart and Bryan Cranston. Both pictures took the top spots at the box office when they debuted last weekend. (There’s some Philly love for ya.)

We’ve yet to see a trailer quite as … Philly? as SHAZAM!, though, a new DC Comics superhero film that features a SEPTA bus bursting through a highway railing and plunging to its apparent demise. (We suspect the film’s hero, Captain Marvel — who goes by Shazam in this film — will swoop in to save the day.)

The new trailer, released on Sunday, features never-before-seen film footage, including at least one good Philly skyline shot about 17 seconds in. The glimpse is quick, but it offers a great view of the city, from a southeast-facing vantage point where I-76 meets the Vine Street Expressway. In the frame, Shazam is flying toward what looks like the new Comcast building, clearly on a mission to save the city or something.

We also get a few views of what appears to be some kind of strange, creepy version of the Christmas Village. These come around 22 seconds in, and then again, 35 seconds in, when there’s clearly a fight scene unfolding. (Important question: Does  the village still sells those cheesy raclette sandwiches in this alternate universe?)

The best shot, by far, is the one of the SEPTA bus crashing through a cement barrier, which comes around 19 seconds in. While the film is obviously fantastical, this is the most realistic snapshot of them all.

Though SHAZAM! is set here, the majority of the movie was not actually filmed in Philly. Sadly, the crew opted for Toronto instead. Philly photographer HughE Dillon spotted them recording outside the Art Museum at least once in December, though.

For the first time in years @KendallJenner didnt walk in the Versace Fashion Show in NYC, but brought good luck to the @sixers last night Plus SHAZAM wraps it's one day shoot https://t.co/JkVsMgjuU1 pic.twitter.com/dnaeYuAFv3

The film follows Billy Batson, a teenage boy who can transform into a superhero (Shazam, played by actor Zachary Levi) when he says the word … yep, “Shazam.”

The film’s first trailer, which was released at the Comic-Con this past July, shows Billy riding what’s supposed to be (but looks much nicer than) the Market-Frankford line. During Billy’s ride, the subway is transformed into some kind of magical vehicle that transports him to the world where he is first introduced to his superpowers. (We really wish this actually happened when riding the MFL, but alas.)

SHAZAM! is set to hit theaters on April 5th. You can view the film’s first trailer below.