Philly doesn’t have a stellar hospitality history when it comes to robot visitors — just ask hitchBOT. 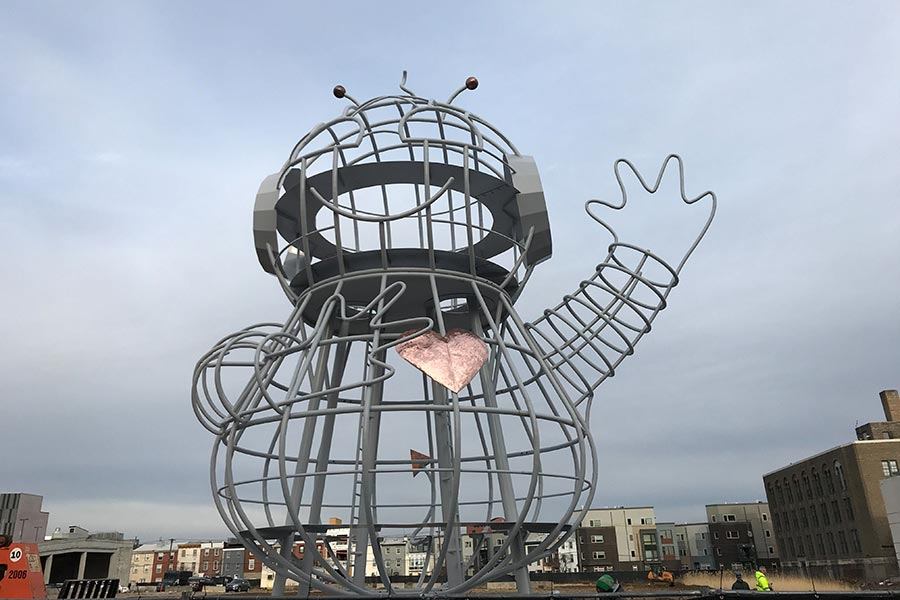 Late last week, we noticed something strange going on in Northern Liberties: Construction workers were assembling a bizarre metal structure in a vacant lot along Germantown Avenue. At the time, it looked like a headless Mr. Potato Head. Or was it a highly un-aerodynamic spaceship?

We sent a reporter to investigate. He was promptly stonewalled — told no photos allowed, even from the street. (This Area 51 behavior lent some credence to the spaceship theory …)

Well, fast forward a few days, and we’ve got ourselves an answer: That wiry mass of steel isn’t an interstellar vessel. It’s Bebot! A kind, fun-loving, 33-foot-tall robot made by British artist Andrea Greenlees.

Soon Bebot will be welcoming visitors in Northern Liberties, Philadelphia

Bebot is not originally from Philly. In its first life, it served as an interactive exhibit at Burning Man. Here’s how Greenlees described her robo-creation to the Philly Voice: “Conceptually the artwork explores the use of calculated cuteness and emotional engineering in robot design. Cuteness triggers in us a desire to approach and engage with the cute object and even, potentially, to care for it.”

That may be true in the psychedelic paradise that is Burning Man, but here in Philadelphia, we treat our robots with a healthy dose of skepticism. Need we remind you of the hitchhiking robot, hitchBOT, which had safely traipsed all around Europe before meeting its end (read: getting decapitated) in a Philly alleyway?

Greenlees insisted that Bebot comes in peace, telling Philly Voice, “The mere fact that he’s waving and greeting shows it’s an endearing piece, reaching out to you.” It remains to be seen whether Philadelphians will reciprocate. But in the meantime, Bebot, a word of advice: Sleep with one eye open.