Philly’s Undying Love for the Eagles, in 20 Tweets

There was a time when our fans might have cursed the Birds over Sunday’s loss. Are the teachings of “St. Nick” Foles getting through to us? 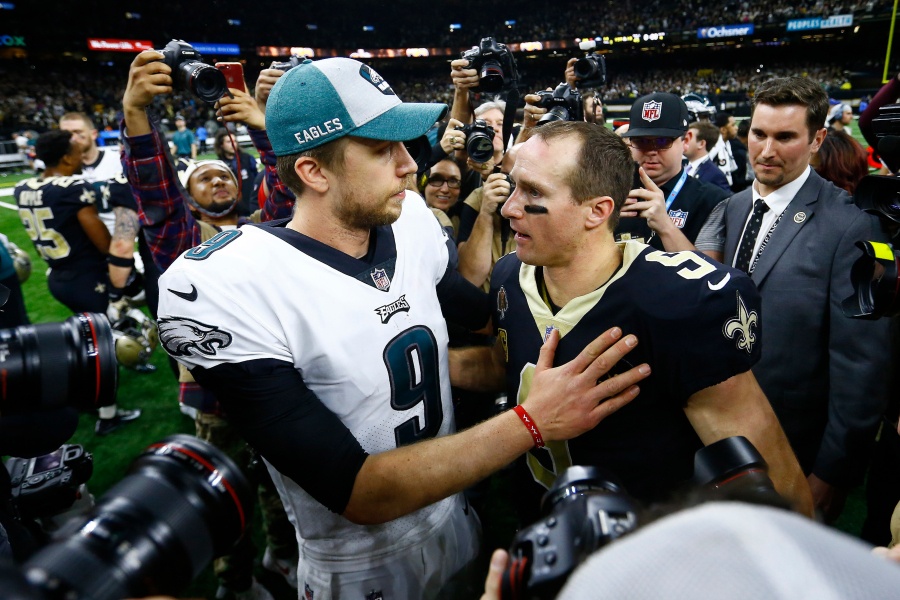 Sunday’s loss to the New Orleans Saints brought the end of Eagles season.

You might think that Birds fans, stewing in the pain of that fateful fourth-quarter interception, would turn bitter. At one point, we might have been. But something’s changed after last year’s Super Bowl win. Even after Alshon Jeffery missed that pass and I felt a crushing weight on my soul, my heart was still full of love for the Birds. A scan of Philly Twitter told me I was not alone.

Eagles fans shared support for Jeffery — who was playing through broken ribs, mind you — and gushed about their loyalty to Nick Foles, the only quarterback to bring us a ring. By and large, they made it clear that they’re here for their team no matter what.

Make no mistake: We lost the game. But somehow, fans are still starry-eyed. Whether due to last year’s victory or maybe the teachings of our beloved St. Nick, we’ve overcome our brutal, bitter, rough-and-tumble ways. Eagles fans are in a new era.

Behold our new selves and our love for the Birds, summarized in 20 tweets.

Fans to Alshon Jeffery: “It happens.”

Sure, maybe some of our immediate reactions were to curse at the screen when the ball slipped through Jeffery’s fingers, allowing for an interception by Saints cornerback Marshon Lattimore. But then we saw how defeated he looked on the field. And we felt for him. And then we read that he was playing through broken ribs, and we really felt for him.

No Alshon = no super bowl last year. This guy is one of the best and toughest receivers in the league. He makes that catch 9/10 times. Yeah it didn’t go our way tonight but it happens sometimes.

Adding context to #Eagles WR Alshon Jeffery’s day. He played today’s game with cracked ribs, which teammate Lane Johnson disclosed to reporters. An MRI earlier in the week revealed the injury, but he played through it. Jeffery also hung tough answering every question post-game

Alshon Jeffery gets millions of fans reaching out, showing their love.

eAgLeS fAnS aRe tHe wOrsT! #FlyEaglesFly

Foles to Jeffery: “It’s not your fault.”

Us, while sobbing, “We love you both.”

Now THIS is a photo.
Lowest point of Alshon Jeffrey’s season and maybe career, and his quarterback, Nick Foles, comes to pick him up. Amazing. pic.twitter.com/bVcd7hl0HN

Just really gonna reemphasize how impressed I was by Eagles fans’ ability to keep it cool.

is this the god damn twilight zone? #1 eagles receiver’s dropped pass leads to a game-ending interception and philly twitter is… pic.twitter.com/8m0OwtFl5X

Thank you Philadelphia Eagles, for salvaging our season and for representing the city with respect. Sometimes catches aren't made and we end up on the short end, but I am proud to be an Eagles fan and no matter what, will always bleed green. FLY!EAGLES!FLY!

Love for our Super Bowl MVP

Frankly, I don’t really care if this was Foles’ last game as an Eagle — not right now, at least. I’m just happy we got him, period — because he made me honestly, truthfully care about football.

Be blessed wherever God takes you number 9 you are a Eagle https://t.co/nLjd202Uh3

Nick Foles might end up, improbably, being my favorite athlete ever. Dude lived life at his own pace, was never afraid of the next thing, always has perspective — and he led the Eagles to a Super Bowl. What a life. Go Birds.

Nah, I think this'll be the lasting memory. pic.twitter.com/TA6JLOJqPL

An emotional Doug Pederson making us feel all the feelings

He truly is the greatest coach on earth.

Give me Doug for the next decade. He is a true leader of men.

Respect to Doug Pederson and Nick Foles for being there for Alshon Jeffery pic.twitter.com/mK86ZLjNxM

The eagles lost but we still flying pic.twitter.com/2d5Q4c3rRO

Because there’s always next year, people.

All well sir, no one expected the eagles to even make it this far. Head up high on to next season. pic.twitter.com/XyF5KNGtvR