Here's what's in it (and a short tutorial on how to make your own). 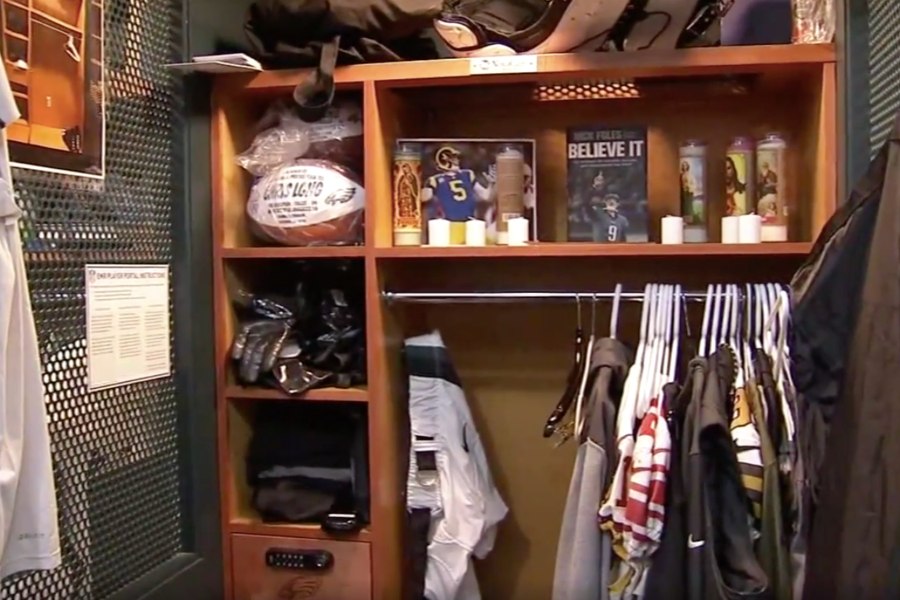 The Eagles aren’t taking any chances leading up to their all-important game against the Houston Texans on Sunday. First, they started wearing ski masks. Now they’re praying to the football gods.

The team has created a shrine to Super Bowl MVP Nick Foles, and it’s rather impressive. It even has some tall prayer candles, which defensive tackle Fletcher Cox lit on Thursday.

Defensive end Chris Long created the shrine in his locker, according to 6ABC, which, of course, was not given permission to film interviews directly in front of the divine space.

“It’s just good energy for Nick Foles,” Long told the news organization. “I know you guys wanted to do the interview over there, but it’s kind of a sacred area. I don’t do interviews in front of the shrine. But it gives Nick good energy.”

Now, you might be sitting at home or in the office wondering how you can create your very own shrine to Foles. First, you’ll have to figure out where to put it. The living room? Your bedside table?

Then, you’ll have to collect the necessary items. In addition to the prayer candles (there appear to be five of them, by the way), the shrine requires additional tea lights, plus a copy of Foles’ book, “Believe It,” (the team’s is personalized), as well as a framed photo of Foles (the team used a photo of Foles in a St. Louis Rams jersey, but we think it’s safe to go with Foles in an Eagles jersey).

“weekend, no different. I know he’s going to show up big.” Says it’s all about generating good energy.

We wonder how Carson Wentz is feeling — does he have his own shrine? Does he want one?

To those out there doubting this latest Eagles antic, know that we continue to fully support the team and its bizarre tactics. The players will need to be feeling themselves if they’re going to win against the 10-4 Texans at home on Sunday. And even if they come out victorious, they’ll still have a few other hurdles to cross before they get there.

But we’re holding out hope. Believe it.

,@JOEL9ONE does not do interviews in front of the locker room shrine to Nick Foles. "It's kind of a sacred area." https://t.co/I1lN9VQgJf #FlyEaglesFly pic.twitter.com/FByQ388yfE