Eagles to Fans: Ditch That Underdog Mask and Don a Ski Mask Instead

We’re not convinced the look will catch on quite like last season’s canine getups, but at this point, we’ll take what we can get. 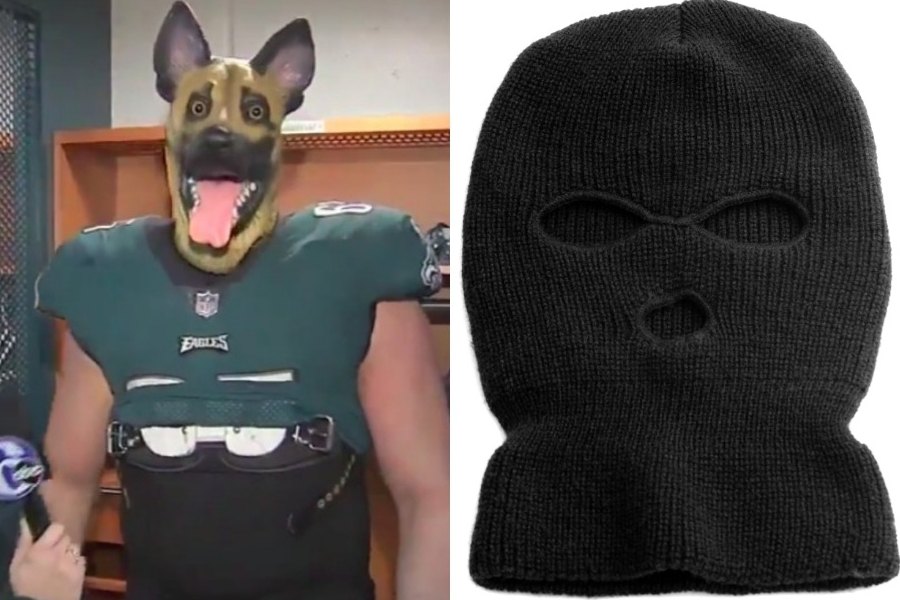 The era of the underdog is over, and ski mask season is now upon Eagles fandom.

After Sunday’s win against the Rams, the football team is employing a new tactic to rally its fan base (and players). Instead of dog masks (which are so last season), the Eagles are now donning ski masks on the field — and players want fans in the stands to do the same.

Eagles safety Rodney McLeod told PhillyVoice that the team started wearing ski masks “to motivate us as a defense” about two weeks ago.

“It’s just a mentality we’ve been having,” McLeod said. “When we go out there, we put the mask on. We’re out there for business, and to take what’s ours … We say it’s robbing season. It’s thievery.”

It’s a look that safety Malcolm Jenkins and cornerbacks Jalen Mills and Avonte Maddox can get behind.

As for fans, though … well, some are a little hesitant to adopt the ski masks — at least compared to last season’s craze over the underdog masks, which quickly became an Amazon best seller ahead of the Super Bowl in February.

Anyone else feel like asking the city of Philadelphia to all wear ski masks is a BAD IDEA? Anyone? Anyone at all?

Overall, though, we’re guessing most Philadelphians are willing to back the Eagles in their endeavors — especially because the team could use the support right now.

Sunday night’s 30-23 win against the Los Angeles Rams has improved the team’s playoff chances, and this coming Sunday, the Eagles will face off against the Houston Texans in their final home game of the season. I’m guessing we’ll see a lot of ski masks at the Linc. (eBay has balaclavas marked with the Eagles logo for $28, by the way, for anyone who wants to take the regular old ski mask up a notch.)

If the Eagles win this weekend, they’ll compete for a playoff spot against the Washington Redskins on December 30th — which means that despite this less-than-stellar season, we could maybe, hopefully (knock on wood) stand a chance to retain our Super Bowl Champions title.

And hey, if ski masks are necessary to get us there, we’re OK with it.

Last year, Eagles fans were rocking the underdog masks. Now we ‘gon be rocking ski masks. I mean that’s a stretch but I’m down.

From dog masks, to ski masks. I am so here for it, #Eagles! #FlyEaglesFly