It's a big week for workers' rights in Philly: Some city employees will soon see a bump in their paychecks, while others are expected to start receiving more predictable hourly schedules. 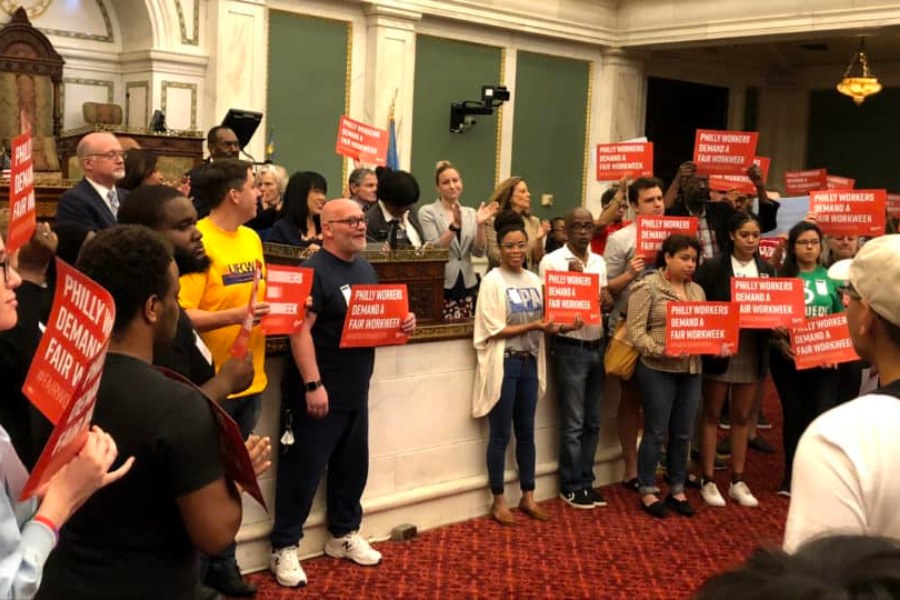 The first, the so-called “Fair Workweek” bill, will help create more predictable schedules for employees of many large businesses in the city.

The second will raise the minimum wage for city employees and those employed by city contractors and subcontractors to $15 an hour.

Councilwoman Helen Gym introduced and led the push for the Fair Workweek bill, arguing that unpredictable hours in the retail, fast-food and hospitality industries were contributing to the cycle of poverty for employees in those businesses. The legislation is expected to affect full-time, part-time and temporary employees at retail, hospital or food establishments that have 30 or more locations worldwide and employ 250 or more employees.

The legislation passed on a 14-3 vote, with Council members David Oh, Brian O’Neill and Al Taubenberger voting no. O’Neill said that he didn’t think unionized employees, who are included in the bill, needed the legislation’s protections, according to Philly.com. The Greater Philadelphia Chamber of Commerce and the Philadelphia Convention & Visitors Bureau also opposed the bill, claiming it would hurt business growth and the tourism industry. Labor unions largely supported the bill, as well as the Democratic Socialists of America and the interfaith organization POWER.

Philly is now the second-biggest city in the country, after New York, to pass a scheduling law. Gym’s office said the bill is expected to affect 130,000 workers. The Mayor’s Office of Labor will enforce the legislation.

City Council voted unanimously in favor of the $15 minimum wage bill, which was introduced by Councilman Mark Squilla and supported by Mayor Jim Kenney.

The legislation comes four years after the city passed a referendum to bump up pay for contractors and subcontractors to $12 an hour. It’s unclear how many people the new law would affect.

Kenney said on Thursday that he looks forward to signing both pieces of legislation.

“I applaud members of City Council for their overwhelming approval today of two pieces of legislation that will help give working Philadelphians a chance to improve the quality of their family’s lives,” Kenney said in a statement. “The Fair Workweek and Minimum Wage bills will go a long way to ensuring that our hard-working residents have the dignity of stable employment and a steady schedule.”

“Poverty works its way into households in insidious, subtle ways — such as when parents must choose between buying new shoes for their growing toddler, or a decent meal for the family,” his statement continued. “It shouldn’t be that way. These bills are an important step toward ensuring that working families don’t face those difficult choices.”