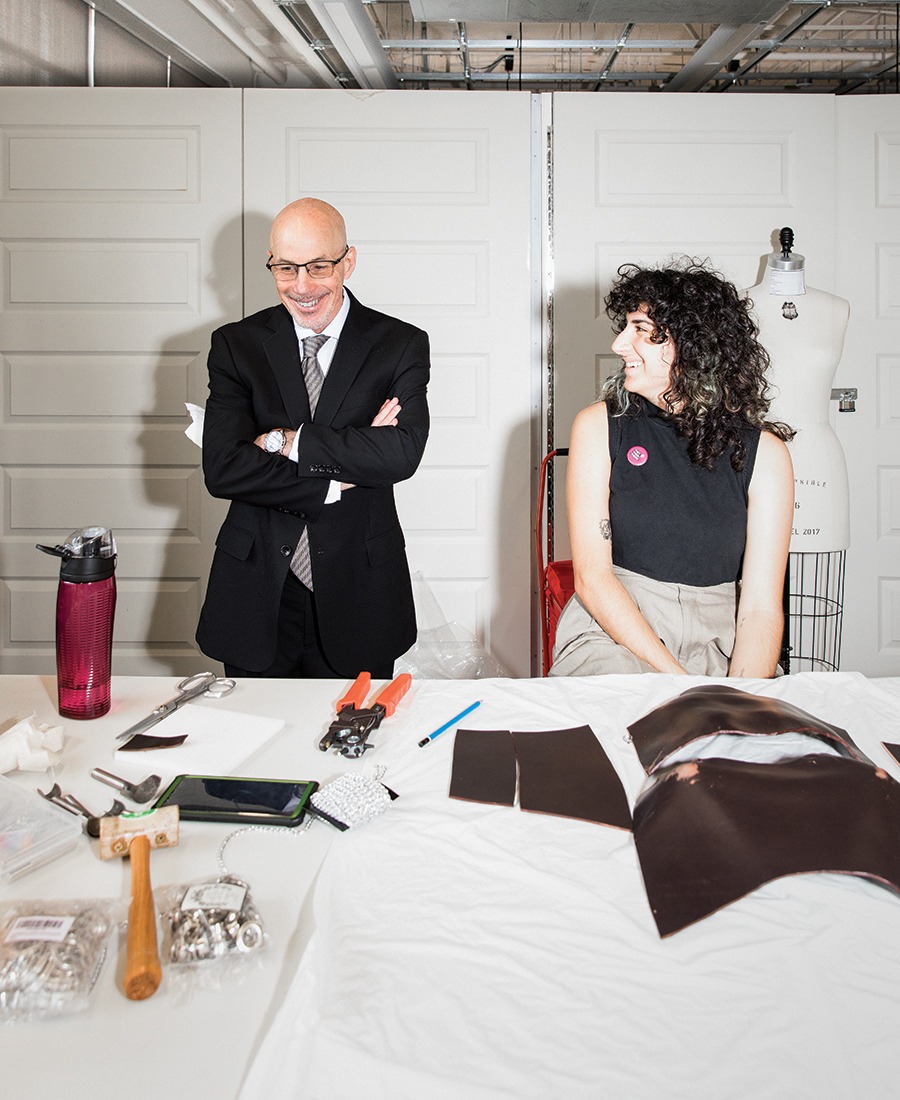 It’s 9:40 a.m. on this, yet another day in Steve Klasko’s quest to remake the world, and the president of Thomas Jefferson University and CEO of Jefferson Health is doing what he does best: asking for ideas on how to undermine the existing order, smash the status quo, find a new way forward.

“This is a dangerous question to ask,” says Klasko, a slight, bald man of 64 who seems to have a certain affection for dangerous questions. “But what are some things, if you were president, that you’d change either in the university or in the fashion program? What can we do to make this place even better for fashion-design students?”

Klasko’s audience at the moment — somewhat improbably, given that he’s spent much of his career working as an obstetrician, delivering more than 2,000 babies — are four fashion-design students at Philadelphia University, the East Falls institution Jefferson officially merged with (read: took over) in the summer of 2017. Since becoming Jefferson’s grand pooh-bah in 2013, Klasko has made a dizzying array of maneuvers, including launching telehealth, cancer and integrated medicine programs; renaming Jefferson’s medical school the Sidney Kimmel Medical College (following a $110 million gift from Mr. and Mrs. Kimmel); and seemingly acquiring every hospital and health system not nailed down in the Philadelphia region. But the PhilaU merger is perhaps the most eyebrow-raising, given the fact that the school’s academic strengths aren’t in science and health but in fashion, design and architecture. That, however, would seem to be precisely the point: You can’t remake the world if you’re going to be timid about it.

Inside the design studio, Tommy Heidebrecht, a red-haired senior whose upcycling of a wedding dress into evening wear won him and another student a design contest on Good Morning America last fall, considers Klasko’s question and talks about the prospect of better printers for the design students. The current ones, he notes, are outdated and limiting.

Klasko nods. “Little things are really doable,” he says confidently, noting that Philadelphia University, which he imagines will one day become Jefferson’s main campus, is now part of the multi-billion-dollar empire he’s created. “So we shouldn’t, especially in our top 10 programs like fashion design, have limitations. Not to be funny, but I can do an executive order to get you what you need.”

Klasko says his goals in these early days as president of PhilaU are twofold. First, he’s spending two days a week on campus, so he can get to know the faculty, staff and students, and they can get to know him. “I’m actually probably overcompensating, spending more of my time on things like fashion, architecture and athletics, because that’s not what Jefferson was,” he says. Second, he wants to make change, and fast: “I want to, as quickly as we can, take the university to another level.”

This, of course, is very Klasko and very much in keeping with his overall vision for Jefferson, which he dreams of building into what he calls “a professional Ivy” and which he believes can lead the way in redefining how health care is delivered in the brave new world that awaits. Or, as he puts it, “I want us to think about not only how we teach students or take care of patients, but how we really fundamentally redesign the human experience.”

Klasko has already been up for five hours. He began his day with a six-mile treadmill run inside the Center City home he shares with his wife, Colleen Wyse, a former Vogue associate publisher. (The couple met on Match.com 15 years ago.) Klasko, who’s also, for what it’s worth, a licensed pilot, is training for the Big Sur half marathon in April, and the combination of running and a revamped diet have left him looking lean — maybe too lean. “I’ve lost 42 pounds in the last six months,” he confides. “It’s been mostly that. It’s not 100 percent that.”

I ask what he was thinking about when he was running today, and he quickly rattles off some topics, including a science-fiction writing contest Jefferson has organized (Klasko, a sci-fi fan, has published three books about health-care reform that reference the genre) and a new partnership with struggling Cheyney University, which has him contemplating what America’s oldest historically black college could look like “if it started with a 2018 mind-set.”

He adds that he was also pondering a trip he’s making to Rhode Island this afternoon to meet with a health insurance executive who wants his insight on artificial intelligence. “I was thinking about if I could get my wife to pack,” he says puckishly, “and what it would cost me to ask her to do that.” (He asked; Wyse said yes.)

His first official appointment of the morning came after an Uber ride to East Falls, where he sat in on a nine o’clock class inside the Architecture and Design Center. During the class, Rob Fleming, director of the school’s master’s program in sustainable design, gave an overview of that program — and the changes that are happening in architecture.

“One of the things I’ve mentioned to my students is that there are [design] firms now not just hiring architects, but they are actually hiring doctors, lawyers, anthropologists, things like that — because everyone thinks differently,” Fleming said. “And an anthropology person is going to think differently than an interior designer.”

The notion made Klasko light up, and it got him talking excitedly to the class. He recalled his initial pre-merger meetings with former Philadelphia University president Steve Spinelli: “Instead of saying, well, what are one or two things we could do together, we said, what’s the boldest thing we could do?” Then he segued into what he believes will be the next big wave in health, wearable fabrics that can, say, measure your heart rate, and how that will mean fashion experts and health experts coming together.

The idea of cross-pollination, of looking at things from different angles, continued to be on his mind after the class had ended. He wants to make sure that med students are exposed to other disciplines in the university, he says: “And, frankly, that every architecture student is spending some time around our clinics and saying, ‘That doesn’t make any sense.’”

He told me that Jefferson had recently won recognition for its program treating ALS patients — not because of a new drug, but because of a mentality shift. “We did something real simple. The patients used to have to go to five different places to get treatment,” he explains. “We said, ‘We know when the ALS patients are coming. And we know they can’t walk. Let’s get the physical therapist, the rehab guys, the neurologists — they can walk! Let’s get them all down there.’ It’s revolutionary.”

Klasko says he has no such thing as a typical day. Last week, his head was buried in spreadsheets, looking at the final details of Jefferson’s merger with Einstein Health (which will bring the total number of hospitals in Jefferson’s system to 18 — 15 more than when Klasko started — and its employee count to 38,000). “It’s okay, because I have sort of a combination of ADD and OCD, so I can sort of go back and forth,” he says.

At 11 o’clock, as we’re about to part ways, I ask Klasko what’s on his schedule for the rest of the day. He mentions a call about Jefferson’s potential involvement in a program treating military vets and a meeting he has back in Center City: “We have another merger we’re looking at that I can’t talk about yet.” And then there’s his 4 p.m. flight to Providence.

Michael Hoad, a Jefferson vice president who’s standing nearby, mentions something Klasko forgot: a call about Jeff’s new membership in the World Economic Forum, the organization that hosts the Davos conference.

“The first year you’re invited to Davos, you’re supposed to keep your mouth shut,” Klasko says. He waits a beat. “I’m not really good at that.” Instead, he’s piped up to conference planners about how the world needs to be thinking more creatively about health care — about how, say, the CEO of Nestlé should be calling him so they can discuss “how to inject health into food.”

“So now they want to imbue health care into everything they do,” he says.

I nod. The conventional wisdom about Steve Klasko is that he’s either a transformative thinker who’ll succeed brilliantly in reinventing Jefferson and potentially health care itself — or an impulsive, chaotic leader who’s moving so quickly, so recklessly, that his plans are destined to end in disaster.

Is Klasko right about the future? Is he right about how to get there? We shake hands, and then, with the clock ticking ever more quickly on this September morning, Steve Klasko turns and hurriedly moves on to the next thing.

Published as “Dropping In: Idea Man” in the December 2018 issue of Philadelphia magazine.