On the party circuit with Philadelphia’s best-known — well, only — paparazzo. 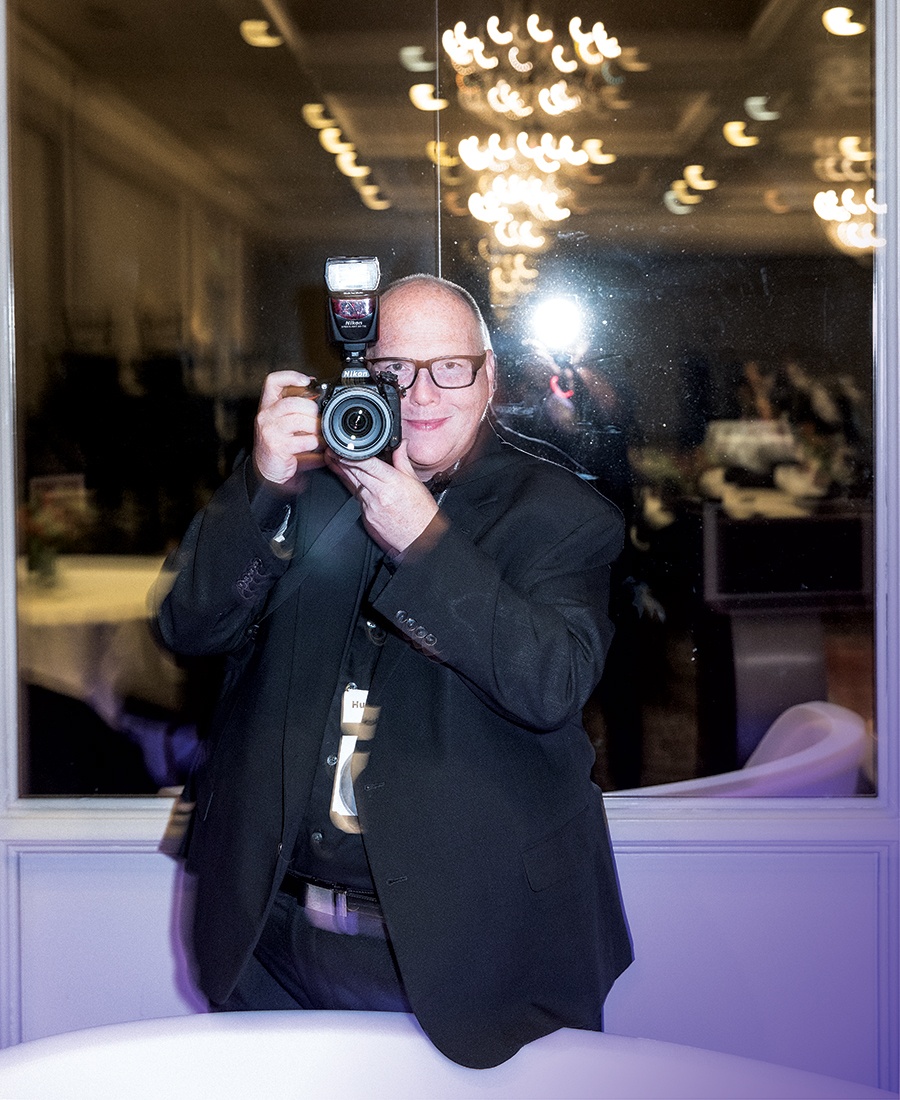 HughE Dillon (and his camera) at a gala at the Logan hotel. Photo by Colin Lenton

“I always take three photos, because Penny is a blinker.”

The Penny in question is Penny Fox, wife of Robert A. Fox, the chairman and CEO of Jenkintown-based private equity firm RAF Industries. Among the well-heeled crowd that has turned out to the Logan on the Parkway tonight for the Wistar Institute’s Discovery Gala, the Foxes are royalty. After all, they’re the only ones here with a tower on the biomedical research organization’s West Philly campus named for them.

And the speaker is HughE Dillon, the cherubic, camera-toting diarist of Philadelphia’s high-society circuit. No one in attendance — with the possible exception of Wistar’s development team — is as concerned about making sure the mega-donors are treated in the manner to which they are accustomed.

“They are the major funders for Wistar,” HughE says in a stage whisper, careful not to intrude or, worse, let the Foxes know they’re being talked about. He’ll snap a lot of photos this evening, but the Foxes are the night’s money shot. “If people are in conversation, I will hold my camera like a baby, right here, so they know I’m there. I step back three feet so I don’t overhear them, so they know I’m respecting them. They’ll catch my eye, and I’ll say, ‘Can I get a picture?’”

The self-described “gentleman paparazzo,” a Cherry Hill native, has been chronicling the see-and-be-seen crowd at charity events in the Philly region for 11 years. He began his photography career as a hobbyist celeb spotter in New York, while he was on assignment for the law firm where he did paralegal work. Since returning to Philly, he’s built upon that experience and carved out one of the more unusual gigs in the gig economy: He’s the guy who’s everywhere, who knows everything, shoots it, and seems to share it all. You’ve seen his work: photos of athletes and celebrities, galleries of black-tie balls, posts from trunk shows and restaurant openings and groundbreakings. He’s in these pages and in those of Philly Style; on the websites of Philly.com, the Philly Voice, the Philadelphia Business Journal and CBS 3; and on Fox 29’s morning show. He’s got his own site, the cheekily named Philly Chit Chat; and if you’re one of his 60,000 followers, you see him on Instagram, Twitter and Facebook. If something is happening in the region, you can bet Dillon knew about it in advance and has better access than you. He comes off as a flighty gadabout, the rosy-cheeked Forrest Gump of post-millennium Philadelphia. But the city’s most famous former paralegal has spent more than a decade amassing a web of trust, a web that he’s deadly serious about protecting — or as deadly serious as a guy who spells his name “HughE” can be about anything.

One big way Dillon builds his vaunted trust network is by ensuring that everyone looks good in a HughE Dillon photo. That starts with simple things like, yes, knowing who the blinkers are. Penny Fox is in good company: “Mayor Kenney can be a blinker,” notes Dillon. And he gets a sign-off on his shots before he records any of his subjects’ names in his ubiquitous notebook. (This wasn’t always the case. After finding himself mysteriously shunned by a “very philanthropic” woman and then overhearing himself identified in an elevator conversation as “the guy from Philly Mag who took that picture,” Dillon added the extra layer of protocol.)

Because he knows as he clicks in which of his numerous media outlets a photo is most likely to show up, he coaches subjects accordingly. “If people have their heads tilted, I try to straighten them out,” says Dillon. After all, “If you want to go in Philly Mag” — which he describes, to me, anyway, as his premier placement — “we’re going to need a cutout of your head, and we want it to be straight up and down.”

Notably, he strongly recommends that people put down their drinks when they pose. “Women don’t like how their arms look in photos, and if they’re holding a drink, they really don’t like it,” he observes. Probe a little, and you learn this cocktail-glass quirk goes deeper. Dillon is actually a self-appointed steward of legacies. “You never know what will happen with that photo down the line,” he says. More than one of his subjects has ended up in the police blotter, sometimes alongside one of his shots. “Maybe it’s because I’m sober,” Dillon says introspectively. Twenty-six years clean, he’s up-front about the alcoholism that led him to attempt suicide three times as a younger man. “Maybe they get sober and regret that photo.”

This is one of the most confounding things about spending time with Dillon — attempting to reconcile his preternaturally chipper demeanor and the darkness that lies beneath. Later in the evening, demonstrating another arm of his media operation, Dillon shows me the reactions to a photo he reposted to Instagram in the afternoon: chef Nick Elmi celebrating his one-year sobriety anniversary, posing shirtless in a boxing gym with fellow ripped chef/recovering substance abuser Michael Solomonov. “Everyone deserves a bit of eye candy on a Friday afternoon,” Dillon’s post begins cheerily, followed by a heartfelt speech on the dangers of addiction.

If there’s one thing that strikes you about Dillon, it’s the near-constant flitting: online, between platforms; in conversation, between stories and ideas; and here, at the Discovery Gala, between the high-top tables and the chattering masses (and their precariously protruding elbows). Dillon, not a small man, is somehow the Baryshnikov of cocktail hour. As I pause to talk to David Lazarus of Bryn Mawr, a partner at LEM Capital who’s getting a noseful of scented air at the Oxygen Bar, Dillon darts off to capture his next shot, and it takes me a few minutes to track him down.

At a foundational level, Dillon is like this because he’s a million things at once: society photographer, celebrity whisperer, social media influencer, Philly cheerleader. One can’t help but wonder what drives him on his almost painfully earnest quest to showcase the gala appearances of the region’s moneyed elite. To more jaundiced eyes, such gatherings could come off as ostentatious displays of wealth. Not so for Dillon. “I was a big fan of the society columns growing up. I always wondered what it was like to be in that world,” he confides. “I’m not from that world. I feel like the blue-collar society photographer. It’s rewarding when I can shine a light on some of the charities that people don’t know about.”

If you ask him, he’ll tell you he’s simply a guy who likes to take pictures. He’s an event photographer who can get images from charity galas, and thus their stories, placed in media outlets. And he’s quietly proud of what he sees as his role in juicing the city’s philanthropic circuit. Before he lost his paralegal job in 2010, he says, he did all his society photography gratis. Now, he’s paid to photograph many of the events he covers. Tonight, for instance, Wistar has him booked for two hours at $150 an hour. “I make about $50,000 a year. I’m not getting rich,” Dillon says.

He thinks of himself not as a photojournalist (a label he vehemently rejects) but as a “content creator” — a wire service. If you push him on this distinction — after all, his carefully curated photos appear in his various outlets as bylined columns, and he regularly breaks news about celebrity sightings, restaurant openings and other developments on Philly Chit Chat and social media — he gets almost flustered. He has no journalistic training, he insists. (Never mind that that’s a trait he shares with many journalists.) He’s obsessed with the notion that he’s not taking the jobs of “real” photojournalists. Suggest otherwise, and he’ll spend most of the evening trying to change your mind.

The concern doesn’t feel disingenuous — Dillon’s a news junkie, and his growing cast of Philebrities has long included members of the local media, which he adores. But it also gets back to the issue of trust. Journalists are eyed with increasing suspicion in some corners these days. Dillon surely wants no part of that. And he quite purposefully calls himself a “paparazzo,” because “people don’t know ‘paparazzo’ as much as ‘paparazzi.’” It’s not the most arch etymological ruse, but little distinctions are important in the confidence game.

And it’s confidence that gets Dillon his tips. Like the time he says he kept his mouth shut about Bradley Cooper coming to town and, even after the news broke elsewhere (um, here), was rewarded for his trustworthiness with exclusive access. Or the time he got the scoop that This Is Us would be filming in Philly and was first with photos of Justin Hartley hanging with Terry Gross at WHYY.

By striking the balance between feeding his readers the info they crave and keeping that information coming from his insiders — and never really having to pick a side — Dillon has become a Philebrity in his own right. His husband, Mike Toub, whom Wistar invited tonight, tells me that life with Dillon isn’t without its challenges. “It’s really, truly impressive how many people he knows in this city,” beams Toub. “Whenever I try to power-walk with him to burn calories, it’s ineffective, because literally every 50 feet, people will stop: ‘Philly Chit Chat! Philly Chit Chat! HughE! HughE! HughE!’”

Perhaps the motivation ultimately lies here. Dillon, whose darkest moments stemmed from being bullied — he was a “chubby” gay kid who wasn’t into sports — has become certifiably popular. At the end of the evening, as we stand in the Logan’s lobby, I ask him what his next few days entail. Without so much as consulting a calendar, he rattles off his jam-packed schedule, with time frames: There’s the Jewelers’ Row fall festival, the wedding of Mob Wives’ Alicia DiMichele, the Gloria Allred event, an Opera Company party, Fashion Week. It doesn’t stop. And neither does Dillon.

Published as “Dropping In: Life of the Party” in the December 2018 issue of Philadelphia magazine.