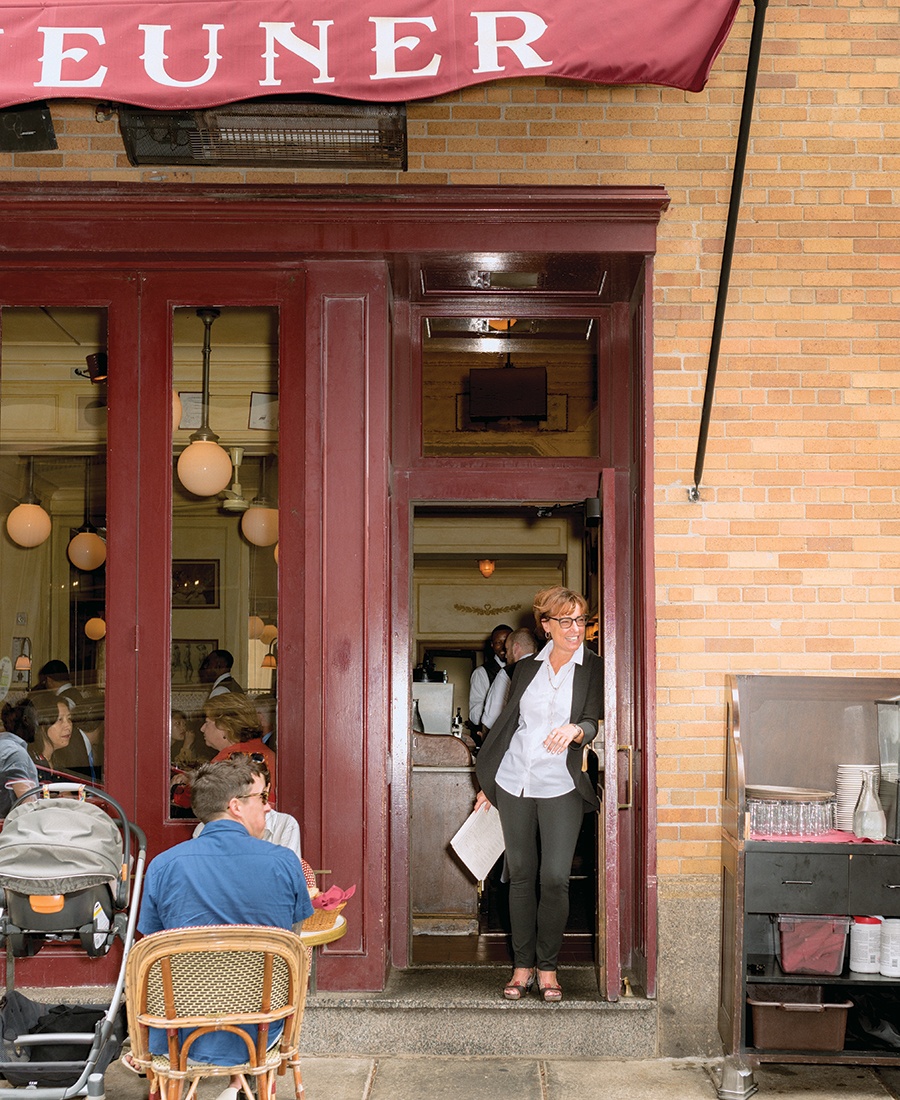 Not much in life is certain, but Carol Serena, the general manager of Parc, knows three things. She knows that at some point today, the Rittenhouse brasserie is going to run out of spoons. At some point today, someone is going to drop a tray of glasses. And at some point today, a busser’s bucket of dirty dishes is going to tip over. When you’ve got more than 80 staffers serving at least 1,200 guests each day, mishaps like these are inevitable. What’s less certain, though, is the weather. It was overcast this morning, but now, a few minutes after noon, the sun is starting to pinprick through the clouds.

Serena grabs her assistant general manager, Kareem McCafferty. “We’ve really got to get these doors open,” she tells him. “We’ve got to focus on that.” She’s referring to the restaurant’s walls of French doors, which, when open, give diners an unobstructed view of the park and allow for prime people-watching. But people-watching goes both ways, and opening the doors also allows passersby to glance in — and when Parc is in full swing with the see-and-be-seen lunch crowd, as it is now, you definitely want to glance in.

For the past decade, Parc has commanded the southeast corner of Rittenhouse Square with a heady mix of good food and even better theater. Not since the heyday of the Palm has there been a restaurant so intrinsically tied to the heartbeat of Center City: It’s serious enough for the power crowd, glitzy enough for the socialite set, approachable enough for the tourists, cool enough for the millennials, and welcoming enough for families (as illustrated by the lineup of chic strollers just beyond the host desk). “It’s everyone’s Cheers,” says Serena, who has been Parc’s GM since it opened back in 2008 — a tenure almost unheard-of in the culinary world. “Everyone knows everyone.”

If you were to glance inside now, at precisely 12:17 p.m., you would see, well, everyone: hosts leading clusters of people to their seats, and servers setting baskets of house-baked cranberry-nut bread on tables. Bussers lugging buckets of dirty dishes, and runners ping-ponging to and from the kitchen with trays the size of small islands on their shoulders. You’d see a baby gumming pommes frites in one of Parc’s $400 rattan high chairs, which come straight from Paris. You’d see those shiny Rittenhouse socialites, and the suited-up power-lunchers. (Before the afternoon is over, Joe Weiss, Sharon Pinkenson’s business-exec husband, will have dined here, as will mega real estate agent Laurie Phillips and Peter Serpico, chef-owner of fellow Stephen Starr restaurant Serpico. On any given day, you might also see Philadelphia Orchestra music director Yannick Nézet-Séguin, Councilman Allan Domb, and assorted athletes.)

And, of course, you’d see Serena, the 50-something powerhouse who keeps the wheels spinning and the staff on track, overseeing Parc’s 230 employees. You might not notice her at first. Discreetly dressed in a black blazer, black pants and a white button-down, her hair swept up in a messy bun, Serena is like a celebrity bodyguard: always lingering in the background, guiding and monitoring, ready to put out a fire or, better yet, keep one from starting. (“No, no, no, no. One at a time,” she says to a busser carrying armfuls of empty glassware racks. “You could run into a guest with these!”) She stalks the perimeter of the restaurant hundreds of times each day, scanning for anything and everything: a napkin on the ground, a guest searching for her server, crumbs beneath a bread station, a closed menu, an empty glass.

The business of managing a restaurant as busy and buzzy as Parc — a restaurant that did $18.1 million in revenue last year and ranked in 2016 as one of the 50 highest-grossing independent restaurants in the country — is a tough job. You have to live simultaneously in the back-of-the-house chaos (“Keep it moving, keep it moving!” Serena says as she sweeps through the kitchen) and in the relative calm of the front of the house. You have to deal with high-level issues like payroll and labor — today, Serena’s main challenge is finding staffers to cover Sunday’s brunch shift — and also minute details, like making sure those fancy French high chairs aren’t stacked too high.

Perhaps more importantly, Serena is also responsible for directing Parc’s polished but unpretentious vibe, which means that much of her day is spent making people feel special: greeting guests, giving hugs, remembering the names of children and grandchildren, asking about vacations and jobs, knowing preferred tables and life stories. Stephen Starr may have orchestrated the foundation for Parc’s success — the enviable location, the talented chefs, and the expertly curated decor that swept us in in the first place. But Serena is the one who keeps us coming back.

Most of Parc’s French doors have been opened by this point; there’s a little sun, and you can barely hear yourself think over the happy hum of guests dining alfresco at the bistro tables. Still, Serena frowns as she walks outside. The whole point of Parc, other than the food, is the fabulous view. And right now, there’s a decidedly un-fabulous tow truck parked smack in front of the restaurant. Serena tracks down one of Parc’s hosts, who explains that a Lexus is being towed and the truck will move soon. You get the impression that if Serena could hop in and haul the stupid car away herself, she would. But she leaves it and keeps moving. There are other things to check and questions to ask. Like, for instance, why does a ticket for table 73 have an order of eggs Benedict on it? It’s now 1 p.m., way past breakfast service, and Parc doesn’t serve eggs Benedict for lunch.

“It’s a seasoned server who definitely knows that, so he must have hit the wrong button,” Serena says. She beelines to table 73, where Mark Gehrs, one of Parc’s former sous-chefs, is dining. Serena’s instinct was correct: Mark ordered the oeufs durs mayonnaise, deviled eggs with king crabmeat, not eggs Benedict. She runs to alert the kitchen to the mix-up. Egg crisis averted.

She scrutinizes the rest of the dishes on the pass — the table on which food is plated and from which servers pick up dishes — and cleans the edges of a few bowls with a quick swipe of a cloth before setting off to do another sweep of the restaurant. (Serena averages about 27,000 steps a day. That comes out to more than 10 miles of Parc laps.) You can’t tell by looking at her, but as she stands surveying the dining room, her mind is spinning through calculations: how many reservations remain this afternoon, how many walk-ins they’ll probably get (about two dozen, though less if the sun, which has ducked back behind the clouds, doesn’t emerge again), how many open menus she sees. She scans the restaurant for these — “There’s five over there, six over there, 13 over here … ” — instantly tallies how many more meals will complete the lunch service, and wheels back to tell the chef.

But before she can reach the kitchen, McCafferty, the assistant GM, pulls her aside and whispers something in her ear. Her head jerks up; she’s instantly at attention. Craig LaBan, the Inquirer’s restaurant critic, has been spotted a few blocks away. Which means he just might stop in to Parc.

“Do some recon,” she whispers back.

And with that, she spins on her heel — yes, she walks 10 miles in heels — and heads to the kitchen.

Serena checks her watch, a Cartier Tank timepiece given to her as a 50th birthday present by a Parc regular who has become her close friend. It’s 1:45 p.m., and the lunch-rush frenzy has begun to ebb. The sun is coming out, again. Only one set of French doors remains closed, in the very front, where a stylish guest is sitting. The guest prefers it that way. No big deal; they’ll be opened once she’s finished her meal. The tow truck with the Lexus is gone, finally, and McCafferty’s come back with intel: LaBan is simply having lunch with his wife at Rouge. A sigh of relief.

Another Parc regular exits the bathroom and stops Serena on her walk-through. Serena knows him well; his wife died a few months ago. She considers him a friend.

“The music in the men’s room,” he says, “is fabulous. I could sit in there all day.”

She tells him she’ll find the bathroom playlist — she controls it from an app on her phone — and share it with him.

A few more laps, a brief conversation with the line cooks, a note to the pastry chef about a birthday — “Have the dessert board say ‘Happy birthday, Lisa,’” she commands — a few ticket checks and plate wipes later, and it’s 2 p.m. Lunch will be closing soon, and Serena’s staff will begin to prepare for dinner service — another crowd of regulars, first-timers, families and friends who will sit inside and look out; another crowd of people who will walk past — the restaurant twinkly and gem-like — and look in. Everything has run smoothly this afternoon; Serena has directed another near-perfect show. And then a server stops Serena as she begins her thousandth walk to the front of the house.

The restaurant, he tells her, has run out of spoons.

Published as “Dropping In: Parc Authority” in the December 2018 issue of Philadelphia magazine.