Hey, Philly, This App Tells You Which of Your Friends Don’t Vote

Of course, it also tells your friends if you don’t vote. 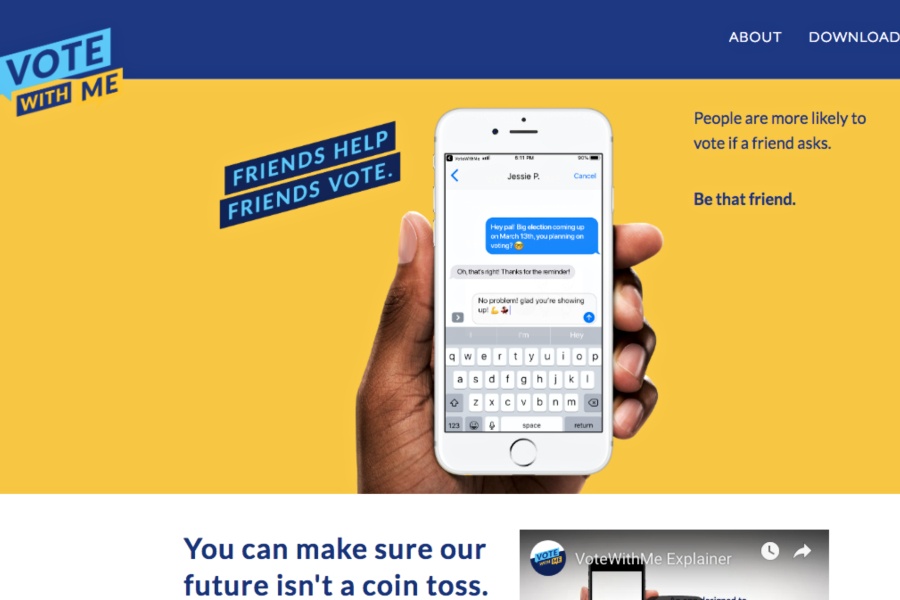 Did voters swarm the polls? Was turnout dismal? Why or why not? What do the numbers mean about the state of politics? About trust in our government? About faith in democracy?

The big questions aren’t always easy to answer. But for now, at least, you can grill you friends.

That’s thanks to a new app called VoteWithMe, which allows users to scan their contact lists to see their friends’ voting records — including their current registered party affiliation. It also works the other way around, of course: It tells your friends whether you voted in past elections.

Are You Registered to Vote? Tuesday Is the Deadline

VoteWithMe was created by a nonprofit called the New Data Project, which is run partially by executive director Mikey Dickerson — a former administrator with the U.S. Digital Service Team under President Barack Obama. Both the app and the nonprofit behind the app claim to be unassociated with any party or campaign, though.

How does it work? The app uses publicly available voter files maintained by each state. As far as we can tell, it only presents election information dating back to 2000. It’s national, so you can look up anyone in any state, but be warned: VoteWithMe will sometimes tell you that the same person is registered in multiple states, depending on the information you use to look them up (and if, for example, they registered in one state and then moved to another).

Is it invasive? Maybe. Is it illegal? No — and don’t worry: No one can see whom you vote for (that’s not public), only whether you voted. For example, we used the app to look up notable Philadelphians like Brian L. Roberts, Amy Gutmann, Stephen Starr, Larry Krasner, Bart Blatstein, and even Jim Kenney. (They all had pretty solid voting records, according to the app.)

If you’re suddenly feeling a little exposed, you’re probably not alone. VoteWithMe has the potential to bring non-voter-shaming (which, let’s be real, is annoying) to a whole new level. 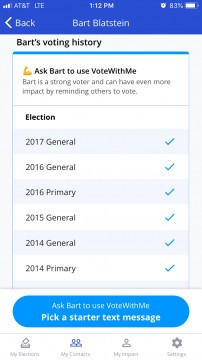 It’s not without reason, the creators claim. VoteWithMe is “committed to maximizing voter turnout, and it’s built on the idea that personal networks play a more critical role in organizing than ever before,” according to the app’s website. The thinking is that users will look through their lists of contacts, see who needs a little encouraging to vote in future elections, and then send them a text urging them to vote. The team behind the app was hoping to see results ahead of the 2018 midterm election — which isn’t yet included in VoteWithMe’s election database.

After all, there’s reason to believe that social pressure actually works to increase voter turnout. As part of a study conducted ahead of the 2006 primary election in Michigan, researchers with Yale University and the University of Northern Iowa sent roughly 80,000 Michigan households various mailings encouraging them to vote in the upcoming contest. Some of those households received letters that displayed the voting records of people in their household as well as in their neighborhood — and informed them that a follow-up flyer would inform the neighborhood of the recipient’s turnout in the upcoming election.

The result? Researches observed substantially higher turnout among those who received mailings that promised to publicize whether they voted. In other words, those recipients were successfully pressured to vote — with the understanding that they could be shamed for not doing so.

So yeah, surely you can understand the rationale behind VoteWithMe. That being said, we don’t condone shaming non-voters, Philly — only lightly encouraging them to become future voters. Maybe it’s one way of continuing our city’s impressive voter turnout in the 2018 midterms.