In the shadow of the Cosby verdict and the Kavanaugh hearing, Philly women — and their allies — are taking to the streets. 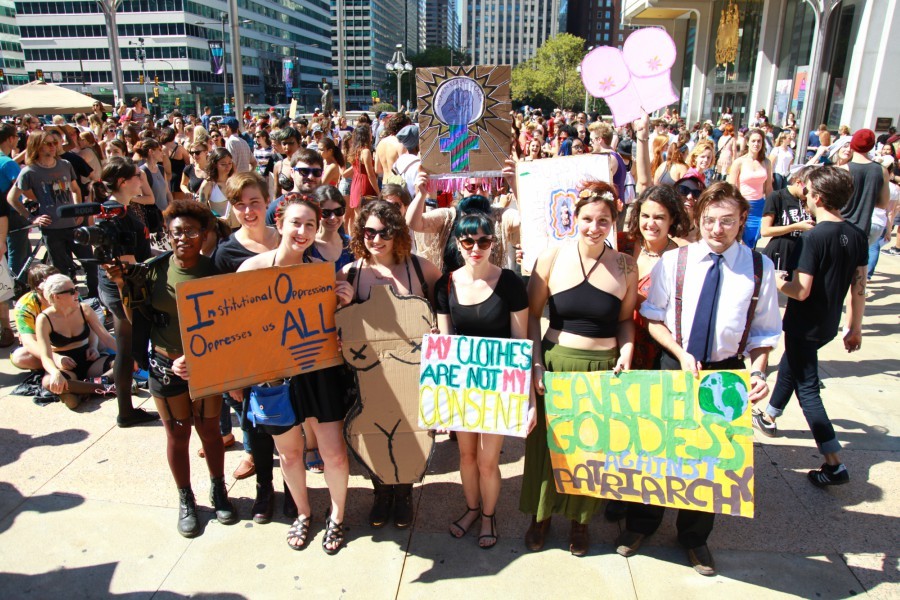 Demonstrators at The March to End Rape Culture (previously known as SlutWalk) in 2014. | Photo by Darragh Dandurand

The annual March to End Rape Culture will return to Philadelphia this weekend as heated debates surrounding the pervasive nature of sexual abuse — and the societal treatment of both accusers and the accused — continue to heat up across the nation.

Sexual assault survivors and their allies will meet at Thomas Paine Plaza at 11 a.m. on Saturday, rain or shine. The event is expected to wrap up around 2 p.m.

Organizers started the March to End Rape Culture (originally called the SlutWalk) in 2010, with the hope of creating an opportunity for “Philadelphians to learn about the widespread issues related to rape culture — a culture where sexual violence is accepted as a part of everyday life — and what is being done to end it,” according to the Facebook page.

NEXT. DAMN. WEEK. The day we’ve all been waiting for is here! Get your babe butts out to join us for this amazing event we love so much and put so much heart into. We’ll have speakers, performances, merch, resource tables, and therapists on-site. March with us as we make our voices heard and support our fellow survivors ❤️ FB event clickable link in bio.

This year, the march will take place just two days after U.S. Supreme Court nominee Brett Kavanaugh’s stunning confirmation hearing before the Senate Judiciary Committee. At the hearing, psychology professor Christine Blasey Ford testified that Kavanaugh sexually assaulted her at a high school gathering when they were teenagers in the ’80s. Kavanaugh rejected the allegation.

“This week especially has been coincidental perfect timing because of the Kavanaugh hearings and everyone being traumatized and triggered from that,” Arika Gold, a march organizer, said in a phone interview on Friday. “So it’s great to have a place to make our voices heard. Systematically, right now, our voices aren’t being heard — but in this space, in this moment, we are going to make them heard.”

Hey, here’s a crazy idea, maybe we actually listen to the survivors who come forward, especially for Supreme Court nominations, bc #AnitaHill should’ve never been ignored and we sure as hell should have learned from that mistake. #metoo #blockkavanaugh #fuckkavanaugh #believesurvivors

Gold said the march will retain its focus on larger, systemic issues, though, like the general impact of #MeToo and what she called the “socialization of rape culture.”

After all, Kavanaugh is far from the only powerful man who’s been accused of sexual abuse — and supported by other powerful men — in the news cycle lately. (For one thing, Bill Cosby’s sentencing also made major headlines this week, making it virtually impossible for survivors not to encounter some potentially triggering piece of news.)

“We continuously have people in power who do not care about women, who do not care about survivors of any gender orientation,” Gold said. “Our main focus has always been to give a space to survivors and to say, ‘We hear you, we see you, you are not alone,’ and to allow all of us to come together and say, ‘This stops with us. All of it.”

Therapists will be on site to assist marchers seeking emotional support.

For more information about the event, visit the Facebook page.