"Dreams, Diaspora and Destiny" is the futuristic result of a collaboration between Philly producer/DJ legend King Britt and muralist Joshua Mays. 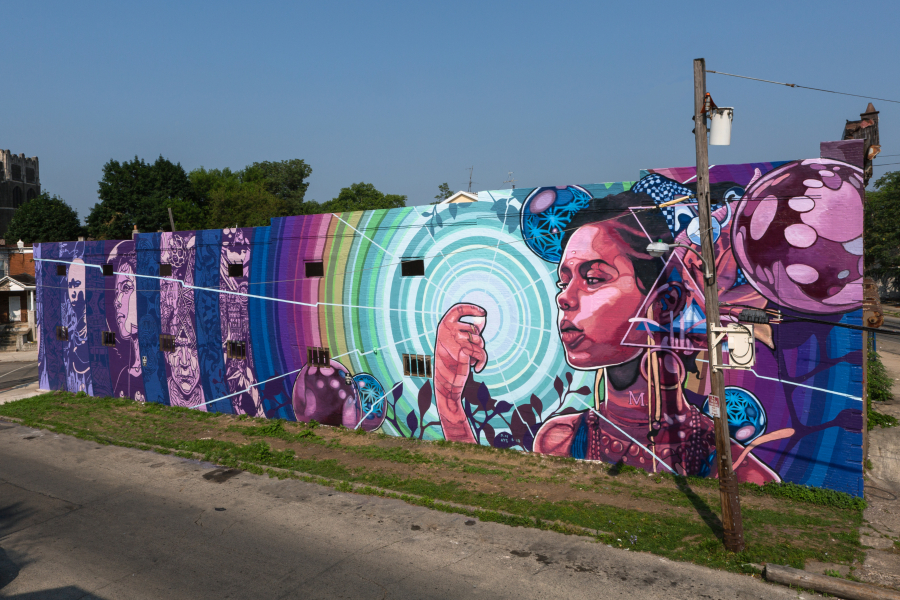 Philly is about to get futuristic.

The city will get its first ever augmented reality mural next month. The project, “Dreams, Diaspora and Destiny,” will combine art and technology to bring a multimedia sight and sound installation to 5300 Lansdowne Avenue, in West Philadelphia.

How will it work? Well, the mural itself is already complete — but starting on October 9th, anyone who downloads and uses Philadelphia-based production company Blue Design’s free smartphone app will see and hear the project come to life.

“Dreams, Diaspora and Destiny” is the result of a collaboration between Philly hip-hop/DJ/composer legend King Britt and muralist Joshua Mays — a duo that previously teamed up last year for a one-night-only performance on October 14th in West Philadelphia’s Malcolm X Park.

For the mural, Britt and Mays partnered with students from the nearby Mastery Charter School’s Shoemaker campus and Haverford School on the Main Line to create the imagery and sound used in the project. Youth enrolled at the Mural Arts Education Program at both schools worked with Britt and Mays in classes this past summer, mulling things like the “visualization of images, sound samples, and archives to reimagine the Conestoga neighborhood [where the mural is erected] and possibilities for its future,” according to Mural Arts.

The result? A one-of-a-kind creation.

“As it turns out, this project is not only visually stunning, it blends technology and public art-making in unexpected and innovative ways,” Mural Arts executive director Jane Golden said in a statement. “And what is most exciting to us is that the young people in our Art Education program are truly the co-authors of a work of public art that is unlike anything else in the city and beyond.”

“Dreams, Diaspora and Destiny” will be featured in two Mural Arts events next month. First, on October 7th, the Barnes Foundation will host Mural Arts’ MuraLAB, a think-tank-style speaker series featuring Britt and Mays, as well as designer/writer/musician/lawyer Walé Oyéjidé (maybe you recognize his apparel design in Marvel Studio’s “Black Panther”), and writer/trainer/lecturer Jill Is Black.

Then, on October 9th, Britt and Mays will officially dedicate the mural, and the public is invited to download the free smartphone app from Blue Design to get the full augmented reality experience, equipped with an “experimental” Afro-futuristic score.

As for what, exactly, to expect of the augmented reality portion of the project, you’ll have to wait and see. We’ll keep you posted — expect an update later this month.

For an idea, you might want to look at examples of augmented reality murals in other cities, like Phoenix, Arizona, and Calgary, in Alberta, Canada.

You may have seen this mural before on Roosevelt Row. This a an augmented reality project created by the Citizens Clean Elections Commission to boost voter registration among people ages 18 to 29. Check out the story at 5. pic.twitter.com/yyrqO3lfwn

At first, Changing Seasons may look like any other mural. That is until a little help from augmented reality brings this piece to life in front of your very own eyes! Come see it for yourself on Stephen Ave & 2nd St SW! #IAmDowntown pic.twitter.com/I9IbhlLEAM