Right now, we're likely to see just rain — though the hurricane will alter transportation in the area. Here's what to know about Amtrak, the PHL airport, and more. 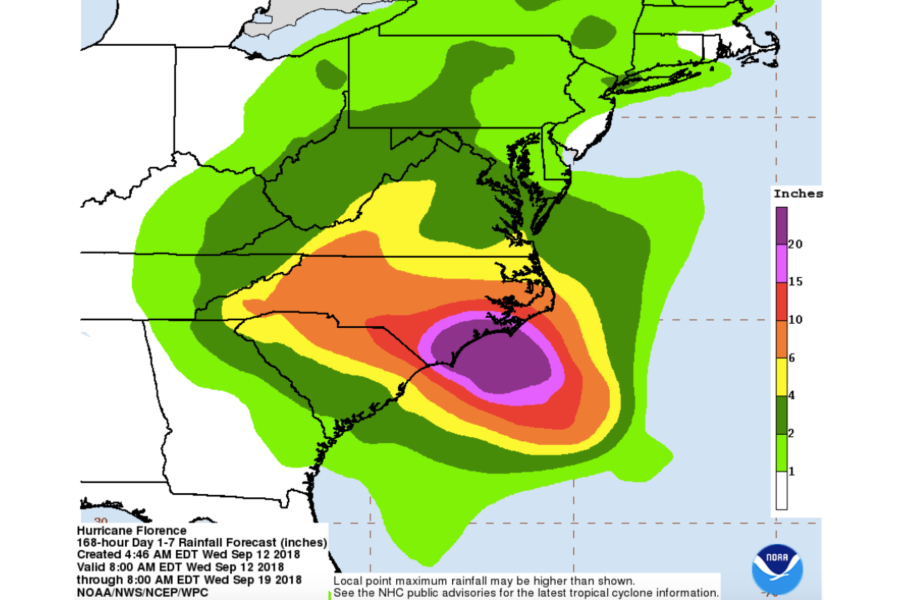 Predicted rainfall as a result of Hurricane Florence as of 8 a.m. on Wednesday. | Via the National Hurricane Center

Hurricane Florence continued to move toward the Southeast Coast as a category 4 hurricane on Wednesday morning, with expected landfall in the Carolinas by early Friday.

Predicting the path and strength of a hurricane is a difficult science — so we aren’t certain of how exactly the storm will affect the Philadelphia region or the Jersey Shore, let alone the Southern states it will likely hit the hardest.

But here’s what forecasters are saying so far:

Florence sustained maximum winds near 130 mph with higher gusts as it prepared to shift over the southwestern Atlantic Ocean between Bermuda and the Bahamas on Wednesday. The storm is expected to slow down considerably by late Thursday into Friday — but it’s still forecasted to be an extremely dangerous, major hurricane when it nears the U.S. coast.

In the Carolinas, Florence will produce excessive rainfall that will lead to catastrophic flash flooding and river flooding, as well as hurricane-force winds. Those states, as well as Virginia and Maryland, have declared states of emergency ahead of the storm, and nearly one million people have been ordered to evacuate from coastal areas.

Here in the Philadelphia region, we’ll likely just see more rain as a result of the storm, though it’s difficult to say for sure or when — both depends on how the hurricane moves. Florence will certainly affect transportation later this week, though, for those hoping to travel (especially to the South). 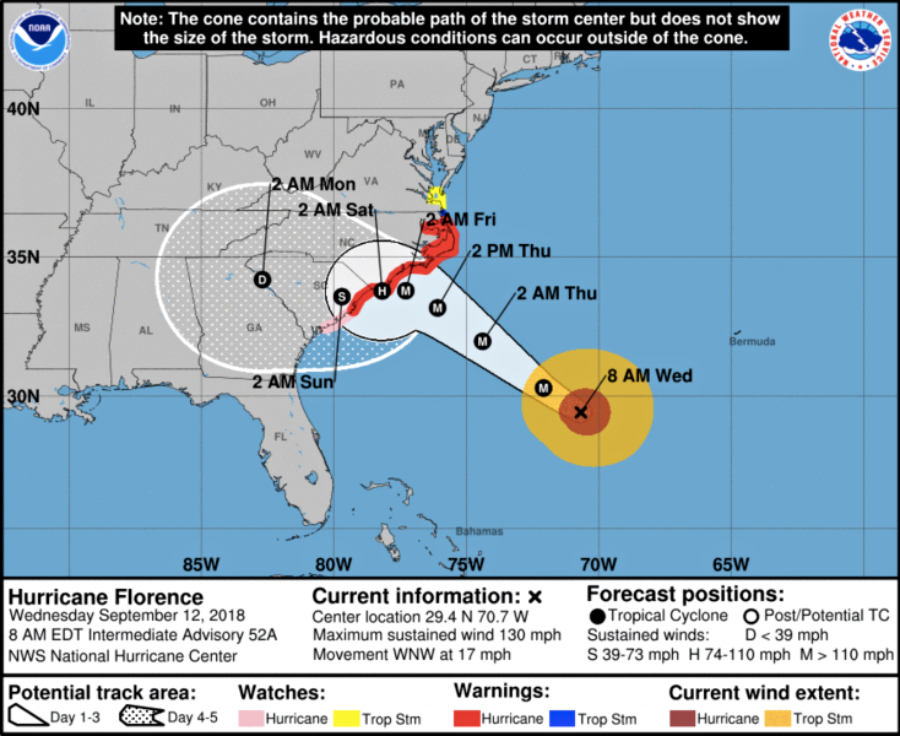 The predicted path of Hurricane Florence as of 8 a.m. on Wednesday. | Image via the National Hurricane Center

Here’s what we know about how Florence will affect transportation in the area:

Amtrak has begun modifying East Coast service as of Wednesday. Trains will not operate south of Washington, D.C., through Sunday.

The company has offered to waive additional charges for customers looking to change their reservation during the modification schedule. To see if your train is affected (nearly three dozen trains are), visit Amtrak’s website.

The Philadelphia International Airport has issued updates ahead of Hurricane Florence. The airport advised that many airlines are offering fee waivers to change travel plans to and from certain cities later this week and weekend. You should contact your airline directly for details — especially if you plan to fly to or from the Carolinas or Virginia.

To help, CBS3 has put together a full list of travel waivers and alerts ahead of the hurricane.

#HurricaneFlorence alert: Many airlines are offering fee waivers to change travel plans to/from certain cities during certain dates. Please contact your airline directly for details if you are scheduled to fly this week especially to/from the Carolinas and Virginia.

Jeanette Casselano, a spokesperson for AAA, said motorists can expect brief, but “possibly dramatic” spikes in pump prices. Drivers are encouraged to fill their tanks ahead of Florence’s expected landfall.