The fire comes on the heels of another on the Port Richmond/Kensington border that covered an entire city block in July. 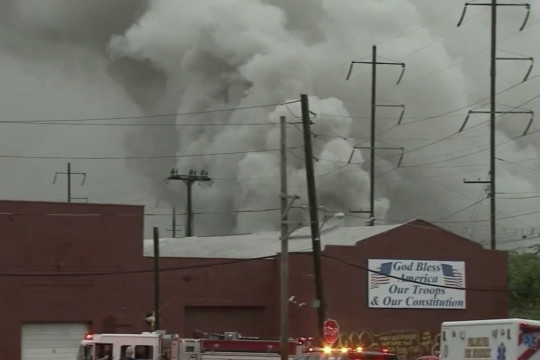 Shortly after 7 p.m Sunday night, a junkyard went up in flames near Torresdale and Adams avenues in Frankford, causing delays on SEPTA and Amtrak services through the city. Both have resumed their normal schedules.

6ABC reported thick, black smoke from the fire and the sound of transformer explosions. The fire, at one point, inched toward high tension power lines. And officials from SEPTA and Amtrak were out late last night inspecting one line of rails situated close to the heart of the fire. The blaze was contained some three hours after it was reported, according to the Inquirer.

Officials said tires and scrap metal were fueling the fire, and crews with heavy equipment were called to bring it under control. The source of the fire is, at this time, unknown. There were no reported injuries.

The fire comes on the heels of another that raged at a scrapyard on the border of Port Richmond and Kensington in July, covering an entire city block and sending smoke and flames into the sky that were visible for miles.

The owner of the Kensington scrapyard, David Feinberg, told Billy Penn that he thought homeless persons suffering from addiction were to blame, and that he heard voices beyond his fence immediately prior to the start of the fire.

“This has been an ongoing problem for years,” Feinberg told Billy Penn.

The scrapyard was issued a Cease Operations order by the city’s License & Inspections office. Feinberg was ordered to reduce the size of his scrap piles to 10 feet and clear fire lanes between them.

“They will need to bring the place into a condition where the neighbors and the neighborhood is safe,” L&I spokeswoman Karen Guss told FOX 29.

Both fires represent a massive danger to the air quality of residents living nearby. Workers with the Clean Air Council and the New Kensington Community Development Corporation called the July fire a “preventable air pollution disaster,” citing its previous L&I code violations — for things like excessive tire storage and mislabeled containers.

Russell Zerbo, an advocacy coordinator with the Clean Air Council, told KYW Newsradio that a healthy air rating is 12 particles per square meter. He said the fire in Kensington was beyond that, likely sending lead and arsenic into the air while the fire burned.

“Once you get to 400, it’s hazardous for everyone — that’s an emergency situation,” Zerbo said. “And the fire last night peaked at 773. I really hope that this is a wake-up call for the city, for regulators.”