Around 2,000 union workers gathered on Penn’s Landing on Wednesday to protest President Trump’s immigration policies, including the separation of asylum-seeking families at the border. 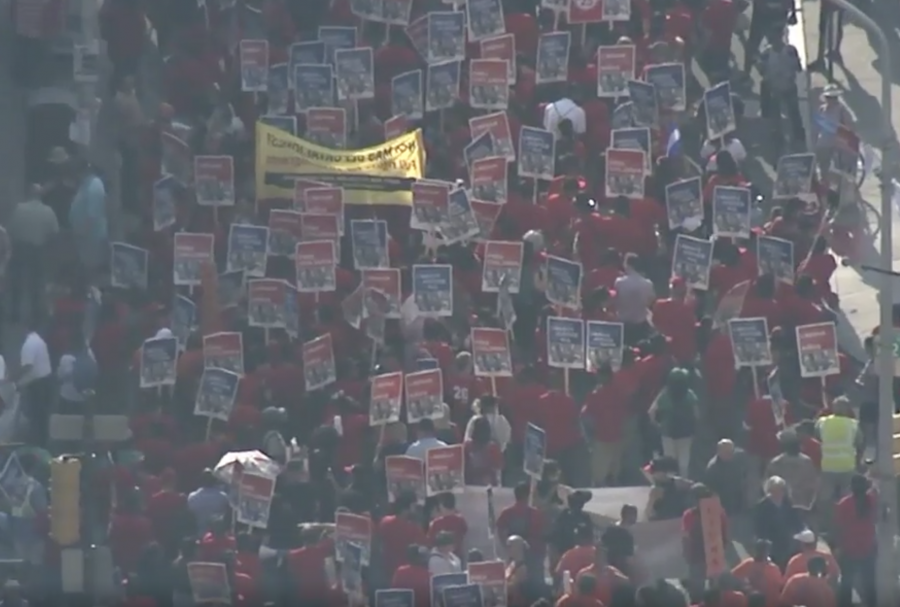 Around 2,000 union workers gathered on Penn’s Landing on Wednesday to protest President Trump’s immigration policies, including the separation of asylum-seeking families and the denial of parole applications by immigrants awaiting case resolution.

A cadre of progressive trade unions were on hand for the rally, but some historically conservative building unions had a presence, too, WHYY reported.

Mayor Jim Kenney, who in late July announced the city would not renew its criminal records sharing agreement with the federal Immigration and Customs Enforcement agency, took the stage in support.

Members of Local 98 of the International Brotherhood of Electrical Workers took part after being contacted for support. Frank Keel, a spokesperson for the union, said he was proud of their involvement.

“We understand, there are probably a lot of our members who voted for President Trump,” Keel said, “but we got a lot of buy-in here.”

The unions using Philly as the backdrop for the rally is no coincidence — a ProPublica report from April found that this city’s ICE officers arrest more non-criminal undocumented immigrants than any other branch in the country, though Pennsylvania’s population of undocumented workers ranks only 16th. And WHYY reported that protesters chose the city because the ICE office here has denied all parole applications from asylum seekers awaiting their case’s resolution.

In June, a federal judge halted the administration’s family separation policy and ordered detained children to be reunited with their family, but the process has yet to be completed.

National leaders from UNITE HERE, which primarily represents hospitality workers, and the International Union of Painters and Allied Trades, orchestrated the rally. The latter’s president, Ken Rigmaiden, took to the podium yesterday.

“We’re united,” Rigmaiden said. “We will not let any child be terrorized — not by a bad contractor, not by an unethical company, and not by an administration that turns its back on what the Liberty Bell stands for!”