7 Injured as Man Opens Fire in Cheltenham Walmart, Then Crashes Into Cop Car

The incident occurred in the Cedarbrook Plaza store around 6 p.m. after a dispute in a checkout line, police say. The ensuing chaos left seven people injured. 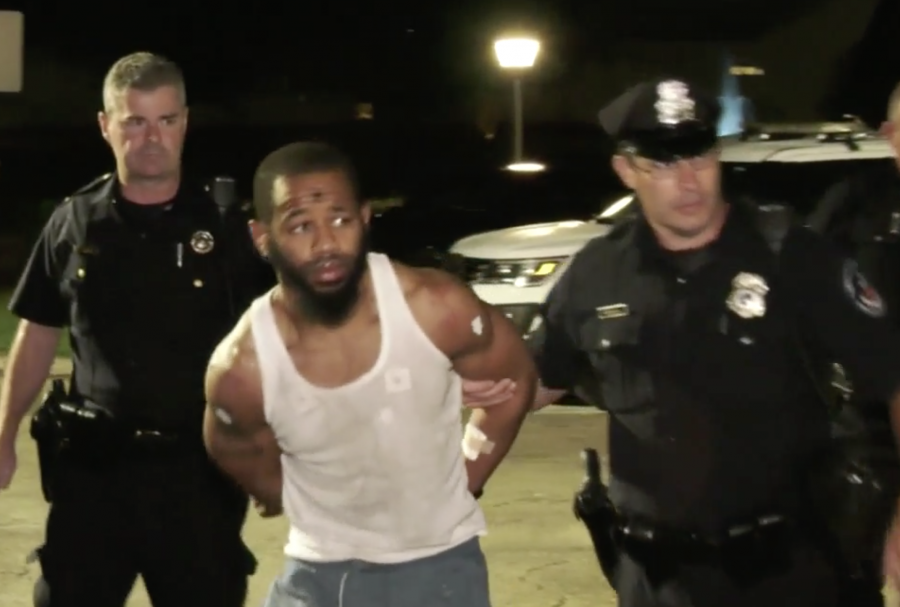 The suspect in Tuesday’s shooting is led into the Cheltenham police station. / Courtesy: 6ABC

At least five people were injured on Tuesday night after a man opened fire in a Cheltenham Walmart following an argument with another customer, police say, and two Philadelphia police officers were later injured when the suspect crashed the car in which he was fleeing into their parked cruiser.

Officials say the injuries sustained by the store patrons and the officers were not life-threatening, and all were treated at local hospitals.

Before the crash, police say, the man allegedly tossed a gun from the window of his car. A violent struggle ensued, according to Philadelphia Police chief inspector Scott Small, and the suspect was arrested. He was hit with a Taser after attempting to kick out the window of the cruiser.

“It was a good job by Philadelphia police who happened to be at the right place at the right time,” Small said. “They made this arrest initially thinking they were arresting somebody for trying to leave the scene of an auto accident and then realizing it’s a much more serious crime, a triple shooting.”

The man was caught on camera by 6ABC being led into the Cheltenham police station.

“I’m sorry,” he said, addressing the camera. “I thought someone was going to kill me.”

"I'm sorry." In exclusive video obtained by 6abc Action News, the suspect in the shooting at a Walmart in Cheltenham Township apologizes. Several people were injured in the shooting that began after a dispute in the checkout line, police say. https://t.co/YznNpFWHLb pic.twitter.com/IecoFhYuRO

The incident began in a checkout line, according to investigators, when the man pulled a gun from the waistband of the woman — believed to be his sister — and opened fire. Police suspect he was on “some type of drugs,” said Cheltenham police chief John Frye at a news conference. The woman was arrested later for her involvement in the incident.

Customers detailed the chaos that unfolded.

Darrell Archer, a cashier, told the Inquirer he noticed a store manager, another cashier, and a customer had all been shot after the gunfire subsided.

“I only heard the shots,” Archer told the paper. “I wasn’t getting that close.”

Jaynee Davis, a nurse, tended to the one of the victim’s injuries while hunkered down in the immediate aftermath.

“We didn’t know if the shooter was in the store,” Davis told 6ABC. “We were petrified.”

A 12-year-old boy happened to be filming on his phone when the first shot rang out. His mother, Rachel Suarez, said they made for the door.

“Everybody ran, and then the alarm came on,” Suarez told 6ABC. “I started to run. I was scared for my life.”

A total of eight EMS agencies, and officers from 22 police departments — including SWAT from Philly and Montgomery counties — arrived at the scene, according to 6ABC.

#UPDATE: Man taken into custody by Philadelphia police after he crashed into a Philadelphia Police vehicle. Police believe he was wanted for the report of a shooting at the Walmart in Cheltenham. https://t.co/TyQ1nCBag7 pic.twitter.com/kIPCY3kK62