The former cable mogul and his wife donated more than $1 billion to organizations, including Philly museums, educational and cultural institutions, and, of course, newspapers. 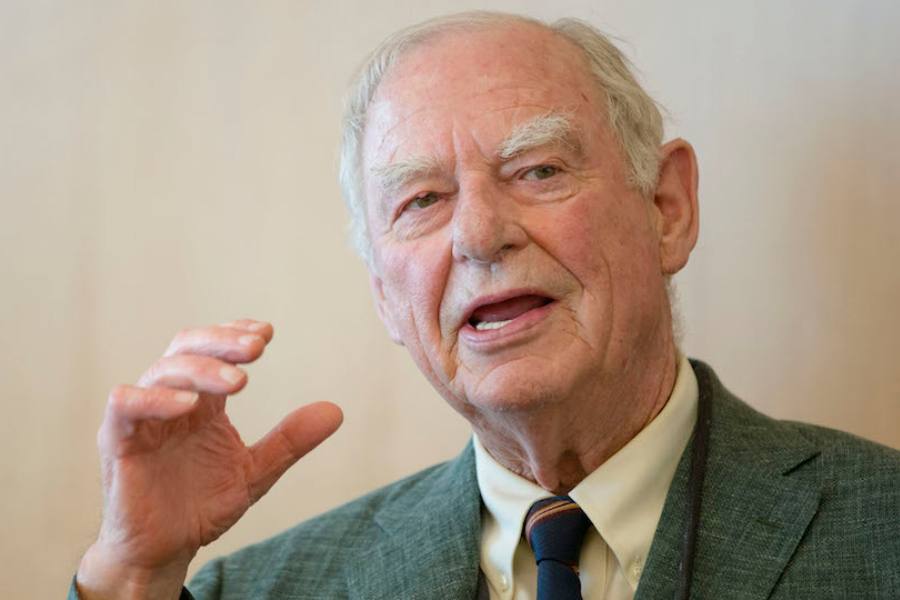 Media mogul and philanthropist H.F. “Gerry” Lenfest, who with his wife invested more than a billion dollars in news media, cultural institutions, universities and more in Philadelphia and elsewhere, died on Sunday. He was 88.

His name, of course, is all over the city: He and his wife, Marguerite, endowed city giants like the Museum of the American Revolution (which dedicated a building to the Lenfests, its biggest donors), the Lenfest Institute for Journalism, the Lenfest Scholars Program, the Philadelphia Museum of Art, the Barnes Foundation, the Curtis Institute of Music, the Lenfest Ocean Program, and more.

Lenfest, who started his career as a lawyer, founded Lenfest Communications Inc., a cable business that he ran with his wife. The company eventually became Suburban Cable, which was larger than Comcast in the Greater Philadelphia region until 1999. Comcast bought the company in 2000 in a deal that eventually netted the Lenfests more than a billion dollars.

Upon selling the company, Lenfest and his wife pledged to give away the majority of their fortune, eventually donating millions of dollars each to organizations like those listed above, as well as Columbia University, Mercersburg Academy, Natural Lands Trust, the Kimmel Center for the Performing Arts, Teach for America, Mastery Charter School, and Temple University.

Late in his life, Lenfest became embroiled in a tug of war over Interstate General Media, the company that used to own the Philadelphia Inquirer, Daily News and Philly.com. After the sudden and tragic death of Lenfest’s bidding partner and fellow philanthropist Lewis Katz in 2014, Lenfest somewhat unexpectedly became the sole owner of the media outlets.

“I’ve given a lot of money away,” Lenfest told the Daily News in 2014. “But I can’t think of any cause that we support that’s more important than the support of the newspapers.”

Lenfest is survived by his wife, his three children, two sisters, a brother and four grandchildren.

Since his passing, dozens of journalists, officials, business partners, and community leaders have praised Lenfest as one of the city’s most important and influential citizens of all time. In a statement, Mayor Jim Kenney called Katz a “Philadelphia giant who left an indelible mark on the city and the entire Philadelphia region.”

“Gerry Lenfest’s business acumen was exceeded only by his philanthropic impact,” Kenney said. “His generous contributions transformed the lives of countless individuals and institutions … Gerry’s decision to return Philadelphia’s daily newspapers to local ownership brought stability to those publications at a time when journalism has never mattered more. Truly, Philadelphia was blessed to have Gerry Lenfest, and my thoughts are with his loved ones during this difficult time.”

“Gerry and his wife, Marguerite, took their incredible success and offered the full energy of their lives in service of their fellow citizens and the city and state that they loved,” Wolf said in a statement. “There is likely not an organization or charity in Philadelphia that didn’t benefit from the Lenfest family’s generosity in some way. From the arts to education to journalism, Gerry understood that the key to building a strong economy and community were strong civic institutions that enriched the lives of all citizens.”

We can never thank Gerry Lenfest enough for putting ⁦@PhillyInquirer⁩ ⁦@PhillyDailyNews⁩ ⁦@phillydotcom⁩ on a viable path of sustainability and helping preserve free + independent journalism in our city. RIP, my dear friend. #greatness https://t.co/xDgOjZNVRB

Thank you for everything, Gerry. RIP. https://t.co/DGlpdB0JYW

Farewell to Gerry Lenfest. He leaves an incredible legacy. He wasn’t born into wealth. He built up a cable business, sold it, then gave, and gave, and gave. He supported the arts and journalism, my own 2 loves. Our city is better for his generosity. Good night and thank you. pic.twitter.com/D06JViAT6M

So sad. Philadelphia lost one if its great philanthropists this morning. Gerry Lenfest also made a serious commitment late in life to help preserve quality journalism and played a central role in making Philadelphia the vibrant media ecosystem it is today. https://t.co/bc7JFwgfVY

Philanthropy on a grand scale is an American invention. Jerry Lenfest is firmly in the pantheon of great and visionary donors who gave for the public good. Philadelphia journalism was his last — and lasting — gift to the city he loved. https://t.co/qDIQnPwy5Q

Pennsylvania lost a great man with the passing of Gerry Lenfest. Through his work and generosity, Gerry left an indelible mark on Philadelphia and our entire commonwealth. His contributions are rightly, universally admired. My condolences to his family, friends, and colleagues.