Look for sand and hammocks near Broad and Master streets — plus everything else you can expect at this year's Philly Free Streets on August 11th. 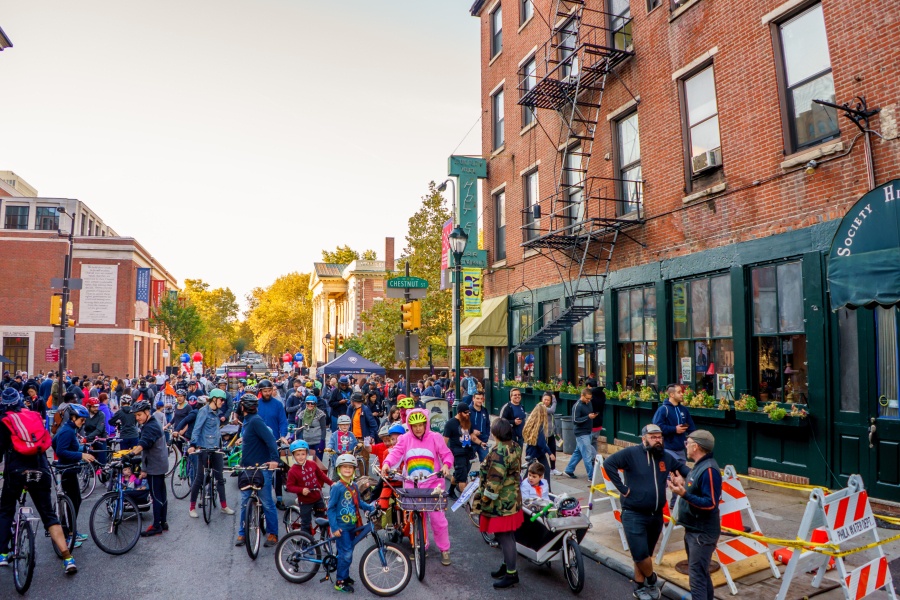 Anyone who was already looking forward to Philly Free Streets on August 11th (including me) now has another reason to get excited: The event will include a pop-up beach on North Broad Street.

It’s one of the many features you’ll find along the Free Streets route, which stretches four miles along historical North Broad Street, all the way from City Hall to Butler Street, just north of Germantown Avenue. Between 8 a.m. and 1 p.m., the city will shut down the road to cars and open it up for walkers, cyclists, and joggers looking to get some air and exercise — all while learning a little bit about the neighborhoods along the route.

Here announcing some exciting new details for #PhillyFreeStreets next Saturday, August 11. Free admission to cultural institutions, a historical scavenger hunt, and there's even going to be a beach on North Broad! Here are all the details: https://t.co/Sa2BxYuyMa pic.twitter.com/h58NES4dfq

Mayor Jim Kenney joined other city officials and members of North Broad Renaissance on Thursday to announce details about this year’s Philly Free Streets, including the pop-up beach on the lawn of the Leon H. Sullivan Human Services Center, as well as all-day free admission to the Pennsylvania Academy of the Fine Arts, performances by The School of Pennsylvania Ballet, a scavenger hunt to learn about African-American history on North Broad, and creative activities with the team from Mural Arts.

Details on the beach at Broad and Master are still unfolding. An employee with North Broad Renaissance said participants can expect to see actual sand — in the form of a sandbox — as well as tons of hammocks, chairs, and family-friendly activities. The best part? It’s completely free to the public, and will remain open on Sunday, as well as on August 18th and 19th.

Recipe for a beach on North Broad Street: beach chairs, umbrellas, hammocks, Adirondack chairs, games, neighbors, and 50 tons of sand! Join us at The Beach on North Broad next #SaturdayMorning and bring the whole family! #ThinkBroad #BeachONBroad pic.twitter.com/fizOQHqdbG

Of course, Kenney will be at Philly Free Streets, getting his steps in like everyone else during his annual power walk. He’ll join residents from all over the city: Data from prior years shows that people from at least 42 of Philadelphia’s 48 zip codes attended the event in 2016 and 2017, and officials are hoping for an even bigger turnout this year.

If you’re attending Philly Free Streets for the first time this year, know that there’s no formal start and stop along the route — you can join at any point you wish, any time. The event, which is led by the city’s Office of Transportation and Infrastructure Systems, is simply meant to highlight active transportation options along with neighborhood walkability and its positive impacts on public health, the environment, businesses and communities.

Meet us on North Broad with your smile! Join us to help promote #PhillyFreeStreets on Thursday, August 2, at 10AM at 2601 N. Broad Street. Hear @PhillyMayor Jim Kenney's remarks and to take a group photo after the remarks conclude. See you there and spread the word! #ThinkBroad pic.twitter.com/msmb2HP0j8

Here are some route highlights via Philly Free Streets. Stretching along North Broad Street from south to north, you’ll find:

At the intersection with John F. Kennedy Boulevard: