The stories, personalities, and moments that inspired and moved our city this year. 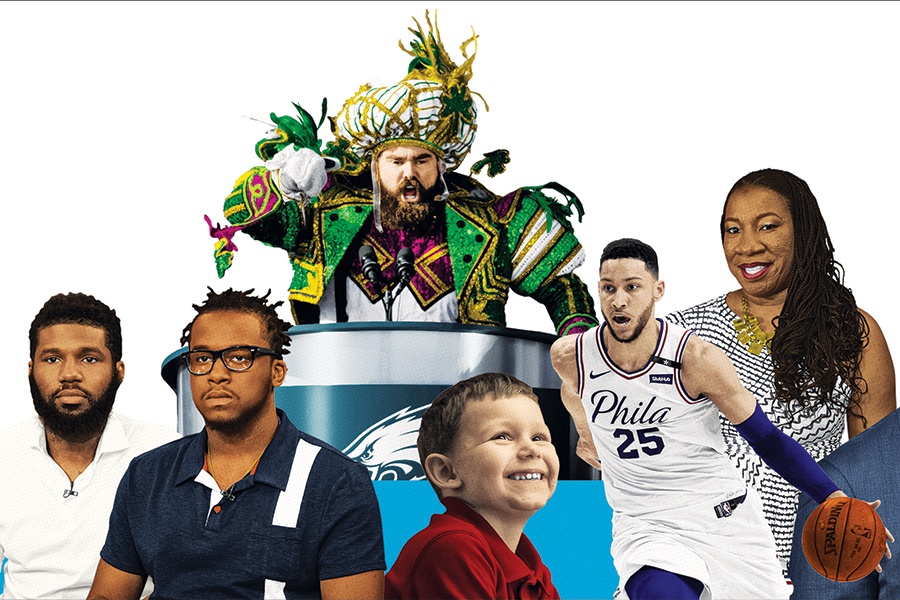 Takers of the High Road

After their arrest — a textbook case of racial bias — at a Philly Starbucks earlier this year made international headlines, black businessmen Nelson and Robinson could have demanded anything. From Starbucks, they accepted an undisclosed financial settlement, free tuition to finish their undergrad degrees, and a meeting with Eric Holder. From the city, they accepted a symbolic $1 each and had the administration set up a $200,000 program for young entrepreneurs. File under: parlaying a problem you never asked for into a win.

Most Philly Moment Ever

In any other city, it would have been Brandon Graham’s strip sack of Tom Brady — or, c’mon, the fucking “Philly Special” — that emerged in the collective consciousness as the iconic moment from its football team’s first Super Bowl victory. But not in Philadelphia. Here, those moments pale next to the mercurial five minutes when Kelce , in full Mummers regalia, took the podium on the Art Museum steps and — like some bizarro-world Rocky — unleashed a profanity-laden maelstrom of a speech that exorcised centuries of Philly underdog syndrome and channeled it into a city-wide primal scream (echoes of which are, according to NASA, still reverberating through the cosmos).

Maybe when you’re only four years old, donating bone marrow to save your twin baby brothers doesn’t seem like a big deal. Or maybe it does — because it is — but if you’re South Philly preschooler Michael DeMasi Jr. ,you do it anyway. In March, DeMasi’s marrow helped four-month-old Sonny and Gio fight a life-threatening immunodeficiency disease. By May, the whole family was home from CHOP.

Don’t let the linguists in the Donovan Mitchell camp sway you: Simmons absolutely was a rookie last season. (And he’s got a shiny new Rookie of the Year Award to prove it.) But we understand the confusion: It was hard for us to process, given Simmons’s post-season leadership and all those triple-doubles, that the 22-year-old point forward was, indeed, recording his first game action since his freshman year of college.

Alongside the starlets who helped crack the #MeToo story of sexual harassment and assault wide open — and were collectively Time’s Person of the Year — was onetime Philly activist Tarana Burke . She founded the Me Too movement back in 2006, just before moving to Philadelphia, where she worked for nine years advocating for victims of sexual violence. Since the #MeToo levy broke, Burke’s been a regular here, most notably delivering the commencement speech for Penn’s School of Social Policy and Practice.

There are lots of reasons to love Philly native/CNN journa-hunk Jake Tapper (those eyes … that smirk … the rakish swagger), but we’re particularly smitten with the way he kicked Trump lackey Stephen Miller off State of the Union when Miller couldn’t stop calling his boss a “political genius” like it was some kind of nervous tic. At a time when D.C. is overrun with fools, Tapper’s having none of it.

Allen is just your normal, everyday Temple-senior-to-Ellen success story. His hilariously catty Kalen Reacts YouTube channel, where he showcases his real-time reactions to bizarre online recipes, scored him a regular gig on the show. The recent grad has since landed his own OMKalen series on DeGeneres’s digital video site, Ellentube.

While the Eagles’ run to the Super Bowl brought out the worst in some of the fan base (see: car flipping, horse punching and — c’mon, people — horse-shit eating), Aunt Terri , the Delco mom Instagram caricature played by Fishtown’s Talia Genevieve, was the day-drinking, frosted-lipstick-wearing, trash-talking but ultimately good-natured spirit animal we needed.

The Phillies basically stole the young Venezuelan — then an undistinguished minor-league second baseman — from the Texas Rangers in 2014 via an arcane loophole in Ye Olde Rules of Baseball. Installed in center field at Citizens Bank Park, he’s blossomed into an offensive powerhouse, a defensive dynamo, and, not for nothing, the guy with the best hair in the game.

In an era in which Americans are becoming increasingly isolated in the world, this Rutgers grad’s Philly-based GREEN Program puts study-abroad and experiential education programs within reach for college students who traditionally can’t afford them. With GREEN’s focus on opportunities in sustainable development, there’s just nothing not to like here.

When Glenside native Mele ,whom we knew and loved on Comcast SportsNet, made the jump to news anchor on Fox & Friends, we … um … look, it’s taken some getting used to on our part. But Mele delivers the news with as much objectivity as one can while standing behind a Fox News chyron. And, real talk? Her backstage livestreams are genuinely fascinating.

Sure, we all yukked it up when Stormy the Cow bolted — not once, but twice — from a live Nativity scene in Old City last Christmas. But Stormy didn’t care about your “holy cow” jokes. Stormy became a movement. To date, her rebellion has resulted in nearly 100,000 people signing a petition calling for an end to live Nativity scenes because they’re inhumane. (We’ll add that they’re also kinda dumb.)

While you were busy daydreaming in a hammock at Spruce Street Harbor Park, the rest of Philly’s Delaware waterfront got a lot more amazing, too. From the game-changing park that will eventually cap I-95 to a cluster of up-cycled piers, Joe Forkin’s DRWC has made the river something to be legitimately proud of.

We can’t help but think that Jonathan Swift himself would have approved of the NAACP Philly president’s suggestion that Temple’s proposed new football stadium be built smack-dab in Rittenhouse Square. Bonus points for holding the press conference right there in the park. Demerits for everyone who didn’t get it.

Pat Meehan. Bob Brady. Charlie Dent. Ryan Costello. We could go on. They all had their reasons: ethical entanglements (Meehan); recognizing they were dinosaurs (Brady); bemoaning D.C.’s hyper-partisanship (Dent); simply reading the writing on the wall (Costello). Each decided not to seek reelection to Congress, opening the door to all manner of fresh-faced contenders in the suddenly fascinating Pennsylvania chapter of the 2018 midterms.

Writer on the Rise

The Penn writer-in-residence/Allentown native’s debut collection of stories, Her Body and Other Parties — biting, sexy, funny, unnerving — was rightly a finalist for a 2017 National Book Award. We’re excited for her memoir, due in 2019.

As America’s incoming 45th administration was pondering travel bans, Temple University’s director of international admissions, Jessica Sandberg, was starting a hashtag movement — #YouAreWelcomeHere — to signal to potential students from around the world that our institutions of higher learning welcome them with open arms. For this, Sandberg became the first Temple Owl to make the Chronicle of Higher Education’s prestigious “Influence List.”

Of all the subplots from the Sixers’ run, we’re partial to the one in which the hyperactive comic emerged as our very own opponent-heckling Spike Lee. Even more entertaining: the f-bomb he dropped on the NFL Network’s Super Bowl postgame show.

Example of Democracy in Action

Recent election data shows that Philly millennials are becoming increasingly formidable at the polls. Real-life proof? Garcia didn’t need George Soros’s money to win as judge of elections in Division 10 of Philadelphia’s 21st Ward. All the 30-year-old student/journalist needed was a single write-in vote — Garcia’s own.

Led by the tenacious Priya Verma, their class-action suit against the Castor Avenue strip club netted $4.6 million in damages — and shone an unforgiving light on some questionable practices. The case could very well change the predatory work policies of strip clubs nationwide.

In 2012, Councilwoman Reynolds Brown tried to raise money for schools by letting all bars stay open till 3 a.m. That proposal, met by NIMBY opposition so predictable you could set your watch by it, went nowhere. This year, she’s floating a bill that would let bars — but only those in “Extended Hours Zones” — stay open until 4 a.m. Sláinte!

We liked how point guard Brunson played as a freshman on Villanova’s 2016 NCAA tournament-winning team. We loved how he blossomed into the Ryan Arcidiacono role for coach Jay Wright’s 2018 tourney winners, racking up points, dishing out assists, and taking home AP Player of the Year honors in the process.

Use of a Windfall

This is what’s called walking the walk: Temple prof Goldrick-Rab won a $100,000 Grawemeyer Award for the research in her book Paying the Price, about the ruinous consequences of the soaring cost of higher ed. She immediately donated it all to the FAST Fund, which she set up in 2016 to help the very people whose plights she’d been chronicling.

Fishtown guy picks up a hunk of Gorwydd Caerphilly at Di Bruno’s, decides it’s too gorgeous to eat, and paints a (gorgeous also) portrait of it. Guy keeps painting cheese (and sometimes other food, too), becomes Philly’s resident foodie artist, gets noticed by the New York Times, and makes it big. Follow him on Instagram at @MikeGenoStudio to see soft pretzels, gorgonzola, Loco Pez’s chips-and-guac plate, or whatever else he’s working on these days.

Just when we decide to Quit Social Media for Good, we come across another musing from this wry, dry comedian—hilarious commentary on pop culture, politics or city life — and we’re sucked back in. (He’s recording his second comedy album at Helium on August 29th.)

This 32-year-old leads the Bearded Ladies Cabaret, the totally over-the-top, gender-bending drag troupe that’s taking the art form to its next level. (Lip-synching to Madonna this is not.) Look for Jarboe, who won a $60,000 Pew grant last year, in his new show, Do You Want a Cookie?, part of next month’s FringeArts Festival.

Check out the rest of Best of Philly 2018 here!