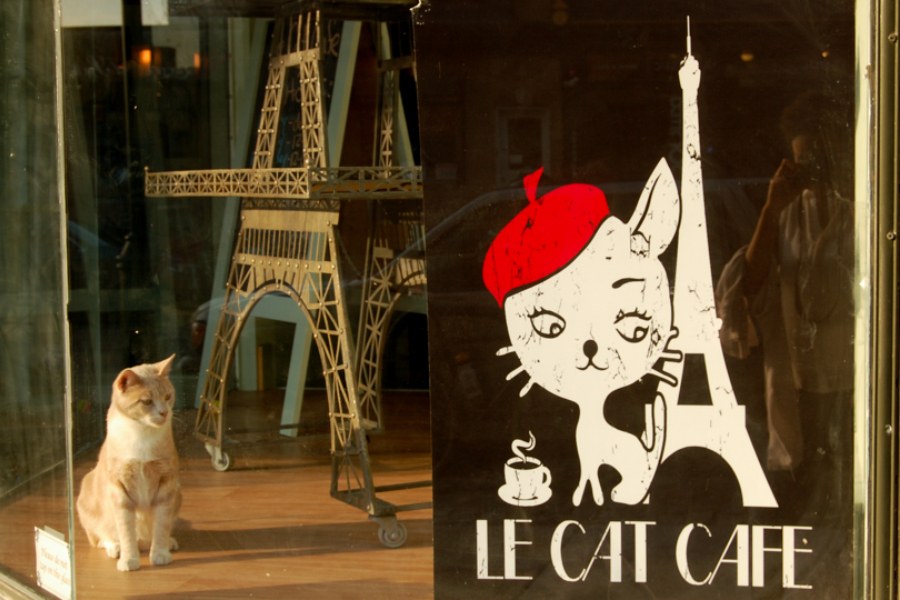 At Le Cat Cafe near 27th Street and Girard Avenue, you can pay $12 an hour (a price that includes a cup of tea or coffee) to mingle with 12 felines roaming the relaxed cafe. Heck, you can even do yoga with them. And if you really like one of them, you can fill out an adoption form and take it home.

But what you can’t do is drop off stray cats outside the cafe in hope that the Brewerytown nonprofit owners will find them a home for you.

Over the weekend, Le Cat Cafe reported that someone had dumped a plastic bin full of five feral cats outside the nonprofit. According to the owners, the cats “had ripped each other apart trying to escape” the bin.

Le Cat Cafe is not a shelter, so it can’t take stray cats. In fact, the cafe can only house 12 cats in its cafe at a time (per state law). The nonprofit’s parent organization, Green Street Rescue, includes a network of volunteers who provide foster homes for cats, as well as help with trapping, neutering, vetting and releasing them. But those volunteers try to ensure that the cats have the “least traumatic experience” being captured, fixed and released.

According to the post, the five cats are currently are Le Cat Cafe — but they aren’t sharing a space with other felines. They’ll likely be taken to the Animal Care and Control Team at 111 West Hunting Park Ave. “We have no choice but to relinquish them and hope for the best,” the nonprofit wrote in the post.

Le Cat Cafe said it reviewed security camera footage and got a “clear photo of the people that dumped these cats” — one of whom appears to be the same individual who abandoned a box of kittens on its doorstep last month. Owners are reminding people that abandoning animals is a crime.

“We want to seek a restorative solution to this issue, but we cannot have a woman using our charity storefront as a place to abandon animals,” Le Cat Cafe wrote on Facebook. “If anyone has any leads on how to contact this woman, please get in touch with us. We would rather work together than escalate the situation by contacting the authorities.”

If you’re looking to report or find a home for a stray cat but are worried about euthanasia, considering contacting Citizens for a No-Kill Philadelphia to check out your options. Also, be aware that cats are more likely to find their own way home than they are to be reclaimed at a shelter like ACCT. The organization, which offers a list of several options regarding what to do if you find a stray, says that the “best thing you can do for a healthy, adult cat who is not in imminent danger is allow him or her to find their way home and only intervene if you are concerned for the cat’s safety.”

So please, people — stop rounding up strays and dumping them at the cat cafe. You’re doing more harm than good.