It’s Wawa Hoagie Day: Get Your (Free!) Piece of a 7-Ton Hoagie

For the 26th year in a row, the company is serving up a half-turkey, half-Italian hoagie for free at Independence Mall. 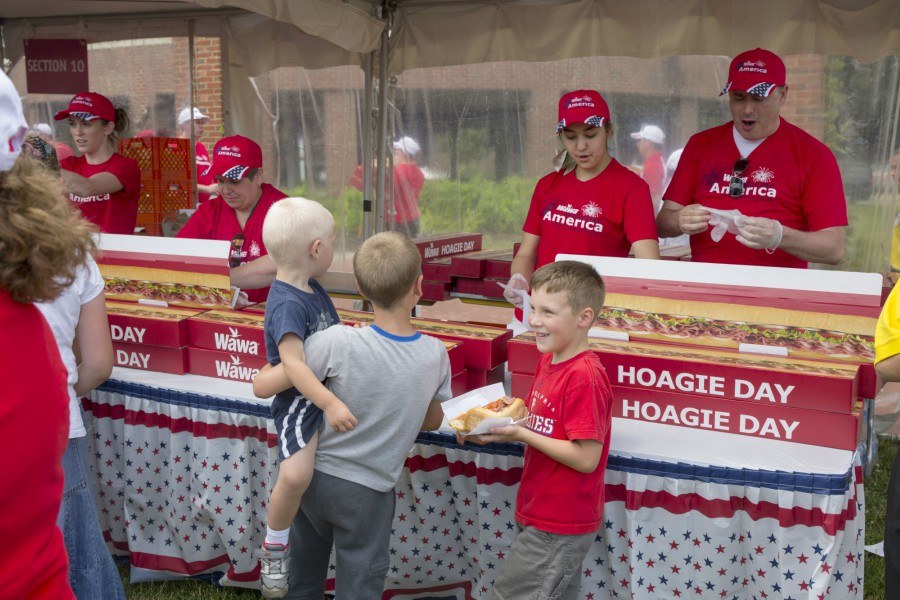 Wawa associates, WMMR’s Preston & Steve, and hoagie fans across the region will gather outside the National Constitution Center at noon to feast on a seven-ton half-turkey, half-Italian hoagie while honoring military members, firefighters, and police officers in the Wawa Hoagie Day tradition — part of The Wawa Foundation’s partnership with the United Service Organizations (or the USO, for short).

Philadelphia firefighters and police officers and members of the Air and Army National Guard will compete in a hoagie-building contest for charity, and there will be a special appearance by the USO Show Troupe.

More than six tons of Wawa hoagie will go to the crowd — for free, of course! Also on Thursday, you can enjoy free admission to the National Constitution Center. It’s all part of the kickoff for the Wawa Welcome America festival, which you can read more about here.

If you’re looking to score a free hoagie today, be sure to visit Independence Mall between noon and 2 p.m. And get ready for long lines!

Here are photos of the Wawa Hoagie Day preparations already under way:

#WawaHoagieDay truly does take a village! Hundreds of Wawa employees are at the @ConstitutionCtr building thousands of hoagies, with the first 5,000 going to Philabundance to help those in need. Thanks @July4thPhilly! pic.twitter.com/Pdp2OCYio6

Wally Goose, Shorti Hoagie, Donny the Donkey & Ellie the Elephant cheer on @Wawa staff as they build this year’s seven-ton hoagie out of 15,000 pounds of ingredients!

Happy #WawaHoagieDay! Which one of these mascots has the best moves?! pic.twitter.com/wzO4nm4m70

#WawaHoagieDay kicks off with a dance party!

Get yours for FREE on Independence Mall at noon, and enjoy FREE @ConstitutionCtr admission. pic.twitter.com/nsWNwHlTGH