How the “Stand With Meek Mill” Movement Got Hijacked

After months of rallies and forums, it seems the true beneficiaries of the rapper's fight for criminal justice reform have been his celebrity friends and politicians looking for a piece of the latest cause. 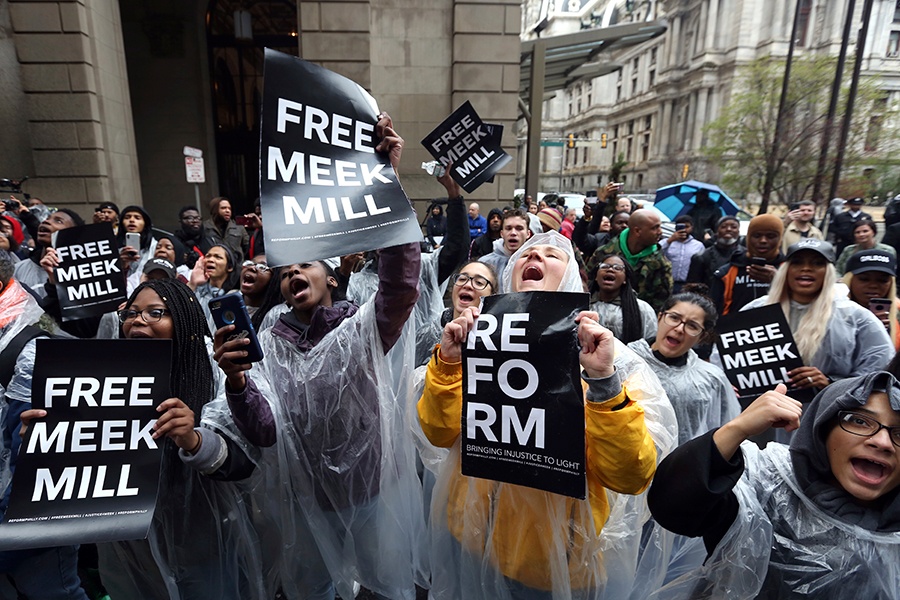 Protesters demonstrate during an April 2018 hearing for Meek Mill. Photo by Jacqueline Larma/AP

What had the potential to become a powerful disruption to our justice system has become an all-star farce.

On Monday, as fans and organizers united yet again to stand with rapper Meek Mill as he seeks a new trial to correct what many see as a miscarriage of justice, I became disappointed once more at how resources were wasted on a moot point. Hip-hop mogul Jay-Z’s management company Roc Nation put on another epic production: high-quality speakers, big-name celebrities, and a sea of branded “Stand With Meek Mill” signs, shirts, and banners outside the Criminal Justice Center. As a result, the crowd looked more like they were a part of a well-oiled campaign machine than an actual revolution.

For the fourth time since his arrest in November, Meek Mill’s celebrity friends got the masses to come out to support him in his hometown. From huge billboards to lit-up buses, the big budget spent on marketing Mill’s release had been pitched as a movement to bring justice not only to him, but also to those who have faced similar hardships within the criminal justice system. But after months of the same showboating, it’s obvious that this “movement” has been nothing more than an over-the-top spectacle pandering to progressives.

I was initially optimistic when the first rally took place on November 13th. It was a week after now-DA Larry Krasner had won his election and the momentum around tackling criminal injustice was high. The movement back then included local politicians who actually did policy work around criminal justice reform, such as state Rep. Jordan Harris and Philadelphia chief public defender Keir Bradford-Gray. I sincerely believed that this was a solid opportunity for the troubled rapper’s platform to elevate people who are facing similar struggles.

But following the success of the first rally, the buzz mostly just attracted national names like Rev. Al Sharpton and politicians thirsty for a piece of the spotlight during a crowded primary election season. Organizers were able to pack a Penn auditorium in April for an event that featured several celebrities, including Sharpton, who got a chance to publicly support Mill’s release while also getting a photo-op and chance to appear “woke.”

“Everyone needs to stand up for justice,” Lt. Gov. Mike Stack said during a Meek Mill rally on April 16th. I was taken aback that Stack, who was running for re-election at the time, was speaking at the event given that he had been previously silent on the rapper’s legal hardships. Suddenly, it seemed as though other Democrats were attempting to score progressive brownie points by weighing in on the matter: Mayor Kenney visited Mill while he was in prison, Krasner said he wouldn’t oppose Mill’s bail, and Gov. Wolf, U.S. Rep. Dwight Evans, and several state elected officials held a prison reform press conference not long after Mill’s release — and just days before the May 5th Democratic primary election.

Meanwhile, the conversation has yet to move on from Mill’s courtroom drama to others actually affected by similar difficulties. While it’s often reiterated at rally podiums that this matter is “bigger than Meek,” the public has yet to see any other victims of these forms of injustice on the stage. While movements like Black Lives Matter and #MeToo champion for various victims simultaneously, it appears as though the big-budget production of Stand With Meek Mill is centered solely on the rapper. It’s hard for me not to be cynical when the entertainment industry seems to be at the forefront of what once appeared to be a cause championing criminal justice reform. After Made in America, another endeavor involving Roc Nation, recently announced Meek Mill as a headliner, I can’t ignore the role that business politics may have played in all of this.

In a nutshell, Jay-Z found a way to turn lemons into lemonade, as all businessmen strive to do. And perhaps all of this was a plot to continue managing one of the hottest names in hip-hop with a win-win for both his management and a community desperate for progress on this critical issue. But unfortunately, I fear that all of this will evaporate once the trendy buses stop rolling and the rallies stop happening.

A true movement shouldn’t start and end with just one person, but should invoke others to be supported across the board. Anything less than that is simply too meek to be taken seriously.