Here’s what cyclists and drivers need to know — including how to avoid getting a ticket on the streets in the future. 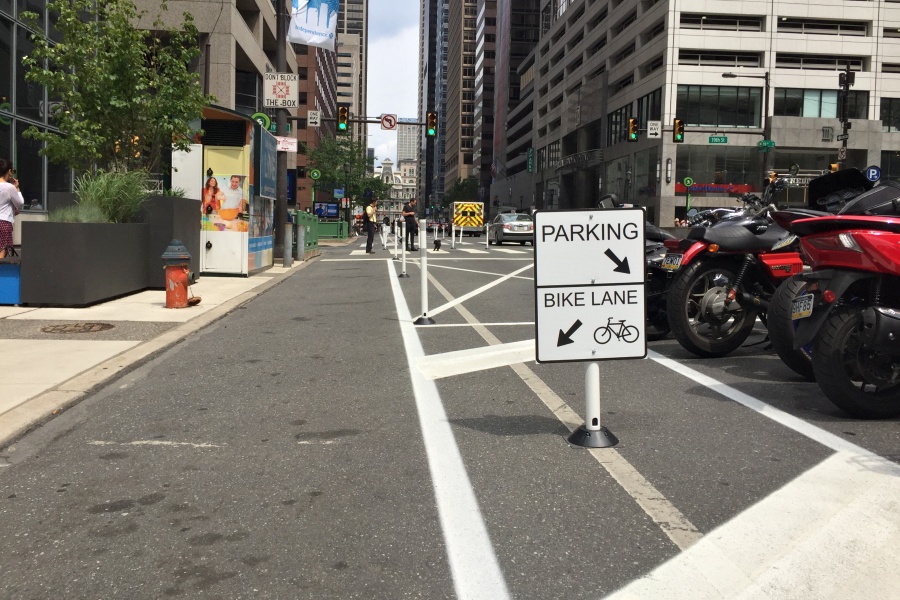 Philadelphia officially opened bike lanes on Market Street and John F. Kennedy Boulevard this week as part of a nine-month pilot project to increase safety on the roads — two of the city’s busiest and most iconic, stretching east and west between City Hall and 30th Street Station.

The lanes, which had been under construction since May (less than two months after the project was announced), are parking-protected, meaning they’re separated from traveling vehicles by parked ones (like you’d probably expect). They run between 15th and 20th streets on both roads.

Their debut has been lauded by Philly cyclists, who have renewed their push for protected bike lanes in the wake of several high-profile cyclist deaths. There are plenty of reasons for pedestrians and drivers to be happy, too: In addition to offering a safeguard to cyclists, the lanes also work to better separate the paths of drivers, bikers, and walkers (which can work to reduce traffic congestion) and to curb speeding and weaving on JFK Boulevard, where a pedestrian was struck and killed in summer of 2017, as well as Market Street, one of the most accident-prone roads in the city. Shorter crossing distances, designated pedestrian waiting spots, and new turning signals and lanes help to organize traffic — and increase safety for everyone using the active arterial roads.

Kelley Yemen, director of Complete Streets at the city’s Office of Transportation and Infrastructure Systems, said in a recent phone call that she’s “thrilled” with the project so far. Jeannette Brugger, oTIS’s bicycle and pedestrian coordinator, agreed.

“I’m very excited about it,” Brugger said over the phone. “[Yemen and I] have both been riding it a good amount. This project is right in the downtown core, so more people are seeing it — it’s a little more high-profile. We can see the elements of it that are working.”

Randy LoBasso, communications manager for the Bicycle Coalition of Greater Philadelphia, said cyclists and others who frequently use the street are “excited to see this project moving so quickly, especially the construction part.

“The fact that this is right in Center City — this has excited people,” LoBasso said. “People are saying things like, ‘Oh my God, my city is a real biking city now.’”

Real talk: even tho I work to promote walking and biking & have ridden a bike in cities for >10 yrs, since having a baby, I've been nervous to ride my bike. Tonight I rode in the JFK protected bike lane for the first time. Game changer! We need more protected bike lanes! #bikephl

The Bicycle Coalition of Greater Philadelphia has fought for protected bike lanes on Market and JFK since 2009, after the Center City District asked property and parking garage owners how Market Street and JFK Boulevard could be enhanced. Believe it or not, most of them said better access to bike parking, bike storage, and safer bicycling facilities, according to CCD president and CEO Paul Levy. (Levy said the streets were both unnecessarily wide; on both roads, a vehicular travel lane was removed to install the new bike lanes). After all, CCD has since conducted studies revealing that 8 percent of employees who commute to work on Market Street and JFK Boulevard do so by bike. That’s far more than the city’s overall commuter bike share population — 2 percent, which might sound small but is the highest of any major American city, according to 2016 data from The League of American Bicyclists.

Overall, the project is certainly one of oTIS’s more forward-looking enterprises: Two intersections of Market Street and JFK Boulevard (at 16th and 20th streets, respectively) are now the site of Philadelphia’s first-ever bicycle traffic signals. The signals, which resemble regular traffic lights but feature small bike symbols, let cyclists know when it’s safe to proceed — and when it’s not. Brugger and Yemen said oTIS installed the signals because they received frequent complaints about vehicles failing to yield to both cyclists and pedestrians at intersections of Market Street and JFK Boulevard. 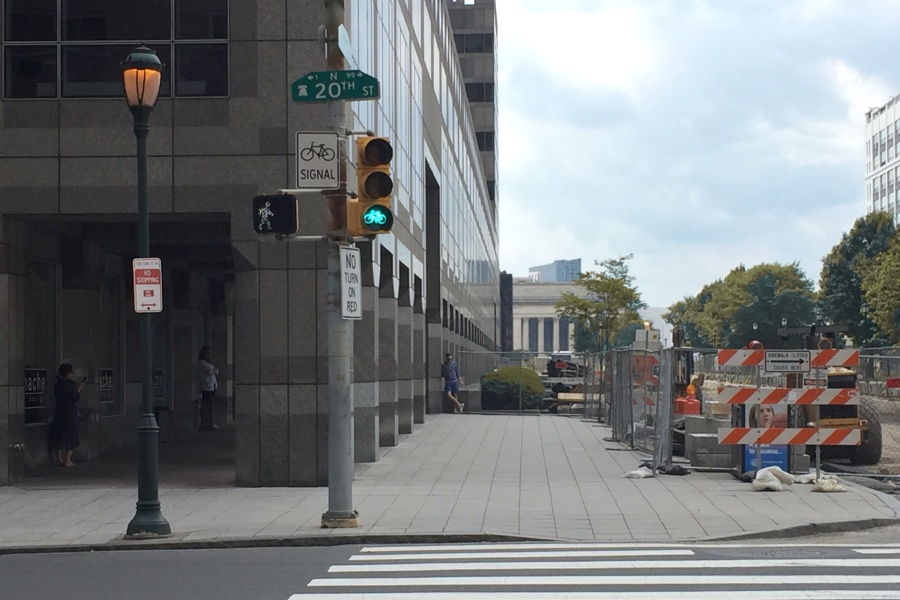 “The whole idea of putting a signal up is that we’re not mixing traffic,” Brugger said.

LoBasso said cyclists are “reacting really positively” to the signals, which make “crossing the intersection a lot easier.”

But he and oTIS officials brought up the same issue: Cars are sliding between the bike lane’s flexible delineator posts and pulling over in the bike path, a chronic and problematic issue for cyclists.

Wasn’t it supposed to be a “parking protected” bike lane on Market Street @PhillyMayor ? @5thSq pic.twitter.com/NKDvneoXuN

“People are still taking photographs of cars pulling into the bike lane for nefarious purposes or for convenience — because [drivers] don’t know how the bike lane works yet,” LoBasso said. “Any change on the street, especially with such a major corridor, there’s going to be a long learning curve, and that’s what we’re experiencing. When something is brand new like this, you can’t expect that drivers are, on day one, going to know what to do.”

For that reason, oTIS began working this week with the 9th Police District on traffic safety education in the area. Officers have started handing out palm cards to drivers who fail to yield to pedestrians in crosswalks, as well as cyclists who use the sidewalk. This “educational period” will last for two weeks — then, heads up, the officers will begin giving out actual traffic tickets. Either offense could cost you $50.

Moving forward, the city will “evaluate and adjust” the pilot project for up to nine months to analyze the benefits and effects of the lane — on things like vehicle speeds, travel times, vehicle counts, and, of course, pedestrian and cyclist safety. At the end of the project, oTIS will discuss findings and the lane’s future with the Streets Department, Council president Darrell Clarke’s office, and the CCD, as well as civic organizations, property owners, and building managers along the two streets.

LoBasso and the Bicycle Coalition are hopeful that the city will keep the lanes after nine months — and even extend them.

“To make the lanes top of the line, they should connect 30th Street Station with City Hall,” LoBasso said. “Bike lanes make traffic better. I think when nine months are over … that will be the finding, and I think they’re going to keep it.”

I took a GoPro on my first spin on the new bike lanes. Below, you can see what it’s like to cycle on Market Street and JFK Boulevard, respectively. (And you’ll catch a few rule-breakers, too.)