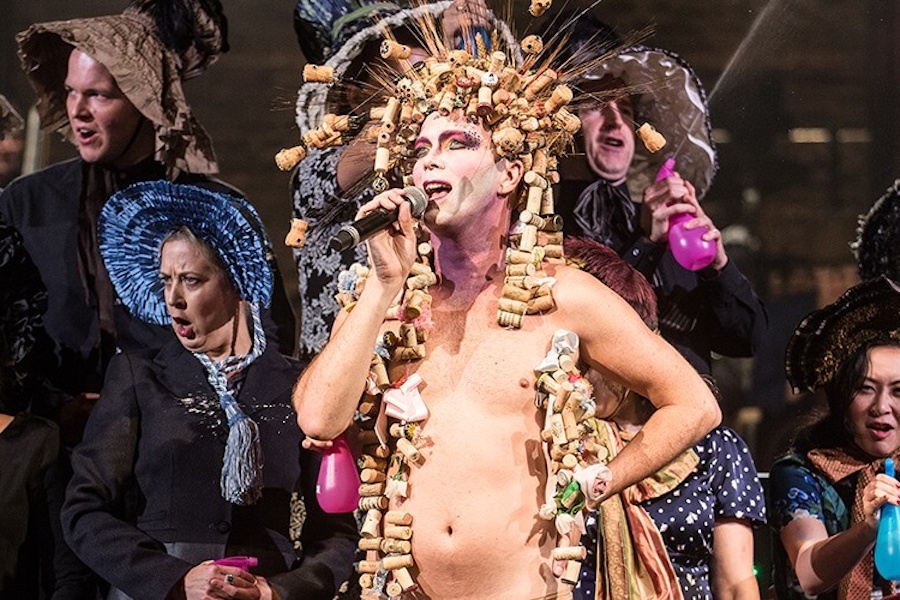 This is a guest post from playwright and author R. Eric Thomas, senior staff writer at ELLE.com, with additional bylines in the New York Times, ThinkingDance and the Philadelphia Inquirer.

A moment for the ushers at the Merriam Theater.

I ran into a friend of mine who ushers for the Kimmel Center about eight hours into part two of Taylor Mac’s A 24-Decade History of Popular Music, which took over the Merriam as part of Philadelphia International Festival of the Arts from noon until after midnight on Saturday. I saw my friend’s red usher jacket before I recognized her. I was standing in a doorway, kiki-ing with a couple of queers and eating a falafel, like you do. I thought I was in trouble. My friend,the usher, replied, “There is no getting in trouble. This is Taylor Mac. Do what you want.” This was, it turned out, an understatement.

This approach–I’d categorize the crowd management philosophy imbued by the show as aggressively laissez-faire–is markedly different from every other experience I’ve had at the Merriam, an epically-wide, 1800+ seat theater with aisles angled like streets of San Francisco. No shade to the ushers or to the Merriam, but there’s always some kind of drama there: entering at the wrong place, entering too slowly, bringing an open beverage in, rappelling down the aisles. So, to be told I could do whatever I wanted–in a theater that, at that point, was a mess of balloons, ping pong balls, soup cups, bag lunches, shredded paper, and glitter–was liberating and terrifying.

There are, without hyperbole, hundreds of ideas in Mac’s explosive cabaret, a 246-song cycle that uses 120 years of American history as a narrative, a question, an argument, and a tool of self-destruction. It’s a genius work, a graduate level thesis on national mythology, gender, queerness, melancholy, representation, community-making, whiteness, and liberation. I can barely process what happened on stage and in the house.

I’m going to kiki with you about one part: the audience.

Throughout the performance, Mac (who uses the intentionally lowercased pronoun “judy” rather than her/him/they etc.) pulled members of the audience, individually and en masse, into the performance–we were compelled to change places, to take up new space, to cede territory. It became clear rather quickly that your seat was not your seat. This was thrillingly illustrated during a sequence covering World War I. Mac asked all men ages 14-40 to come up to the stage. We poured down the aisles and crowded in among the musicians. There we remained for most of an hour before being released. “If your seat has been taken by a woman,” Mac warned, “do not take it back.” We, who had spent the better part of a decade facing outward at an audience of women, older men, and the few children who were lucky enough to attend, were suddenly made aware of the potential in the moment, the energy that was made possible by absence. There wasn’t a mad dash to claim new seats but, somehow, when I and my friend returned to our seats there were two men in them. They reported that they’d been displaced from their seats. So then we were nomads. We were taken in two rows back but I have to admit I was little shirty about it for a while. Mine were press tickets! They were very nice! I paid zero dollars for them and I felt entitled to keep them for the duration.

The tension of this negative emotion was actually exhilarating to me because, for once, some nonsense that went down in the audience was actually part of the performer’s intention and therefore I just had to deal with it as part of my show experience. How aggressive! How delightfully rude! As a former long-time restaurant host and front-of-house manager for a Philly theater company, I should have known already that the small dramas and power plays that arise from seating logistics are my kink, but I guess we all meet ourselves anew every day.

Mac said repeatedly, “Everything you feel is valid,” and just like when my therapist says it I assumed it meant “Everything is going to feel wonderful forever and if you feel something bad, you are probably broken.” This wasn’t the case, apparently. I came into the performance game for anything and prepared, to be completely honest, to absolutely eat it up. This is very much my shit. It’s cabaret, it’s queer, it’s too much, it’s a masterwork of dramaturgy, there were so many butts. What’s not to love? Also, it served as a culminating moment in my Month of Queer Theatrical Endurance. I saw Broadway’s The Boys in the Band, which is a mere two hours but does not have an intermission. If you leave the theater during the performance, you can’t get back in. Boys star Zachary Quinto is full of venom and he doesn’t care if your bladder is full of urine. The month continued with the full two-show Saturday at Angels in America, which begins at 1pm and ends around 11pm and includes roughly 14 intermissions. It’s an immersive theater performance where most of the action is comprised of you standing in an aisle waving at every queer person you’ve ever met but not having the energy to, like, walk over and say hi. It’s extraordinary.

All that is to say, I felt superbly prepared for the marathon of endurance that is part two of Taylor Mac’s behemoth. “Very excited to sit in this one spot until midnight, passively having live theater done at me and occasionally taking a blurry Instagram so that people know that I am engaging with life,” I chirped to absolutely no one in particular when I sat down. But, of course, it was not to be. Mac, a MacArthur Fellow and Pulitzer Prize finalist, is not interested in endurance but rather destruction. “How do we build ourselves while we are being torn apart?” Mac asked at multiple points during the performance. Part of the destruction is the concept of the passive receptor in a theatrical space. This was not something that was being done for us, or at us. Mac’s agenda–one of many–was to remind us that the history we share has happened to us, by us, around us, on top of us. We can’t, therefore, reasonably expect to have ideas fed to us. Especially in theater. This is a production that wants to engage with you, and to collaborate with you, and to argue with you. What an invigorating objective for a theatrical experience. If you’re going to spend 12 hours someplace–or 120 minutes, no intermission someplace–you should leave wrestling with what you experienced. Theater is about an opinion, but it’s not an opinion that is formed in a vacuum. It is about, ultimately, our reality, our existence. To ignore that is to not sincerely engage with theater.

So, in addition to all of the labels one can throw at A 24-Decade History of Popular Music-cabaret, gender studies thesis concert, dandy lecture, drag TED Talk, protest song cycle, Radical Faerie revolution, costume dramaturgy realness–it is also a social justice action disguised as a performance. Mac makes the audience co-conspirators in the projects of the piece, one of which is engagement with our own liberation. This is accomplished through sly crowd participation moments, through didactic presentation, through the time-honored cabaret practice of textual deconstruction and narrative, through ceding power and elevating other voices. It appeared, unexpected, in moments where our collective repetition of a lyric or, once, the sounds of our rhythmic breathing created a song’s percussion and then an atmosphere all its own. And of course, the social justice action manifested itself through the seating.

There was a phenomenal segment in which Mac ruminated on the suburbs as a birthplace of white supremacy, fed by a desire for heteronormative, patriarchal uniformity and a cult of nostalgia. Just your usual Saturday afternoon chat. Mac lectured a little bit between songs, presenting ideas in a more forthright way than other ideas had been set forth previously. I’m here for conversations about the myth of the good ole days so I was like, “Whatever, didact me, daddy.” A master of theatrical surprise and invention, Mac had other plans. The talk veered to white flight and Mac had the audience demonstrate it by instructing all of the white people in huge center section of the Merriam to abandon their seats and move to the side sections. Of course, the center section is where the most expensive seats were. That’s the point. And of course, there was not enough room for all of the white people in the side sections. Again, the point. Mac then told all of the people of color in the room to move into the center section, the city in this example. There were maybe 50, 75 of us. Honey, I left my cushy press seat with a quickness and took up residence in the fourth row. I had the whole thing to myself. And I felt actual glee. I caught the eye of another person of color, a local actor, and we both cackled. And that’s also the point. Occasionally a white person would get tired of standing on the side and would return to the center. The ushers always came and asked them to move back. There are, apparently, some rules.

The stated purpose of this exercise was to get people of color into good seats as a way of counteracting systemic oppression. (White people were allowed to move back in eventually. Everyone was okay. Please don’t yell at me. I am sorry for cackling.) (I am not sorry for cackling.) But the experience of it was shocking and visceral and more liberating than anything I’ve experienced in a theater. It wasn’t about the seat; I ended up moving three more times. It was about the possibility that was again present in the room and all of the ideas that Mac had destroyed in order to get there.

Perhaps the best art about our culture must be made as a sacrifice on a proscenium and also in the seat the where you are. Our history is arduous and effortful and desperately in need of queer liberation and artistic destruction and cabaret explosion; it will not go quietly. Taylor Mac’s brilliant, exhaustive, exhausting performance tears down the imagined wall between the artistic idea and the lived experience. It challenges itself, its makers, and its audience to be rigorous and engaged. It creates a complex framework with, it turns out, quite a lot of internal rules, and then hands the power over to the people.