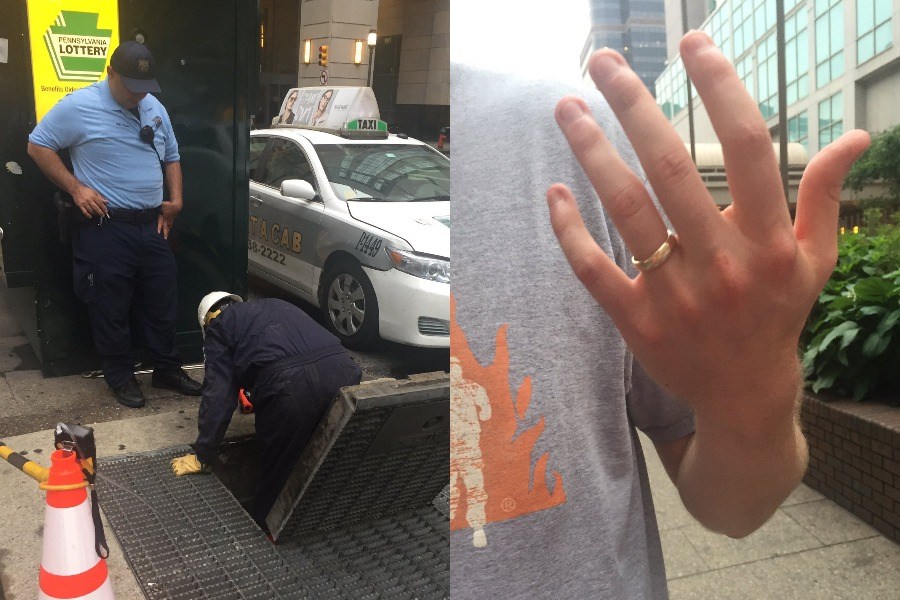 About one week after Steve Brown told his wife that his wedding ring felt loose, the precious heirloom from his late grandfather slid off his finger and rolled right through a Philly sewer grate into the city’s subsurface Land of Lost Items.

Brown dropped the ring last Friday night while walking through Center City with his wife, Erin Brown. It slipped through a sewer grate on Filbert Street between 12th and 13th streets, outside the Marriott Hotel. But unlike previous owners of the 12-foot-hole’s other victims (cash, credit cards, condoms, an employee badge, and a few sets of keys), Steve and Erin were determined to retrieve the ring engraved with his grandparents’ initials and wedding date.

The Browns’ story has been gaining attention since Erin posted about it in a Twitter thread over the weekend. The couple did get the ring back — but only after a wild ride involving a trip to Home Depot and some kind strangers, including a PECO worker whom the couple has dubbed their “knight in shining armor.”

“On Saturday, I was like, ‘Well, we might as well try ourselves,’” Erin said of their decision to fish for the ring (which they figured city officials couldn’t help retrieve until Monday). “I said, ‘Let’s go to Home Depot.’”

There, the couple bought items to fashion themselves a sort of sewer-grate fishing rod. “We looked at different hooks, a device that could be used to unclog sinks, and eventually we stuck dowel rods and a hanger together with duct tape,” Erin said.

He was told that nothing could be done until Monday when City Hall reopened, so we headed to Home Depot and created a makeshift fishing pole out of dowel rods and a clothes hanger. We headed back to 12th and Market to get what was ours. pic.twitter.com/I6XOoMzYTV

It actually worked — they used the device to retrieve a ring. But it wasn’t Steve’s ring.

“I was very impressed that we were able to fish out a ring, it was just the wrong ring,” Erin said. “We thought it was Steve’s because it looked gold, but that’s because it was just completely rusted over.”

The story continues. People walking through the area proceeded to attempt to help the Browns; some even lay beside Erin and peered down the grate, she said.

We continued our search. During this entire time, strangers came up in an attempt to help us. Tourists from Chicago. Cab drivers. Homeless people. A bachelor party. Some even laid on their bellies to help us look.

After about an hour, the hero of the story arrived. The couple spotted a police officer, who called a PECO worker named Brian Naughton. Naughton removed the grate and descended into the underground with a flashlight to retrieve the ring.

He donned protective clothing, used his tools to open the grate and meticulously combed the area using a flashlight. We laid on the grate above, helping him search. After what felt like an eternity, the flashlight hit a spot. Gold. Shiny. Reflecting the light. pic.twitter.com/9YdSa50BdT

And so the Brown’s very-Philly fairy tale had a happy ending.

Brian emerged from below victorious, my husband’s wedding ring in his hand. We all cheered- the cab drivers, the tourists on the street, and Philly cops who had come just to watch how this was going to end. pic.twitter.com/OXBMZcDKcR

Erin said she took down Naughton and the officer’s names and plans to call their supervisor to make sure they get “some recognition.”

Of course, they took a group photo. Then they made plans to get the ring resized.

Yesterday could have been an incredibly sad and disappointing day, but instead it became a shining example of generosity, perseverance, and what it means to live in the City of Brotherly Love. Thank you @PECOconnect , @PhiladelphiaPD , and all the strangers for their support! pic.twitter.com/cjDwRB67IZ