A new grant will help connect the Schuylkill Center for Environmental Education’s 340 acres — the city’s largest privately owned open space — to the SRT. 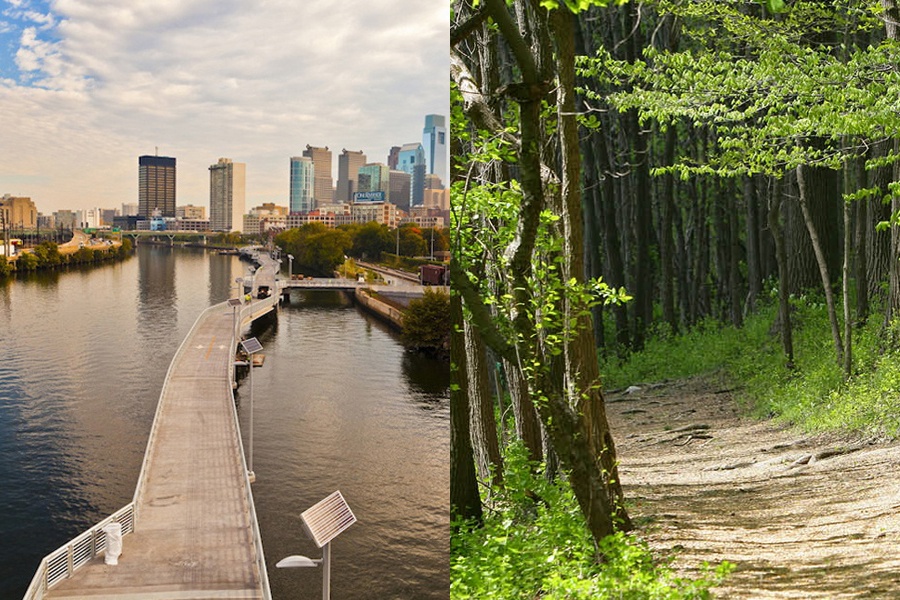 Photos by Laura Kicey (left) and the Schuylkill Center for Environmental Education.

The winding Schuylkill River Trail runs just a stone’s throw away from Philadelphia’s largest privately owned open space, although guests of the Schuylkill Center for Environmental Education would never know it thanks to the lush woods and wetlands blocking their path.

That won’t be the case for much longer, however, as the Upper Roxborough facility plans to connect its 340 acres to the trail with hopes of bringing more foot traffic through one of the country’s first-established urban environmental education centers.

On Thursday, officials with the Schuylkill Center announced that a grant from the William Penn Foundation will pay for the joining of the space’s four miles of trails to the larger Schuylkill River Trail, which currently spans approximately 60 miles (with a future projected total of 130 miles). The project has been in the works for three years now and will provide a “surprisingly rare” scenic view of the city once the connector is completed.

“By creatively establishing a direct physical link to the trail, the center will be able to connect with thousands of people on the trail to increase their awareness of the Schuylkill River and its important role in the Delaware River watershed,” Andrew Johnson, director of the William Penn Foundation Watershed Protection Program, told the Inquirer.

Additionally, the connector will act as a second entrance to the environmental center’s grounds, which feature a host of fields, forests, meadows, ponds, and streams for exploring. The mission of the Schuylkill Center, described as a “living laboratory,” is to “inspire meaningful connections between people and nature.” The organization believes that its link to the SRT dovetails nicely with this pursuit.

“We’re revealing and telling the story of a beautiful stream and forested glen to the river trail users,” said Mike Weilbacher, executive director of the Schuylkill Center. Construction of the link will begin in June with a target opening in the fall.