As pornography is ever more accessible — yes, your kids are watching it — Al Vernacchio’s revolutionary approach to sex education is exactly what the sexologist ordered. 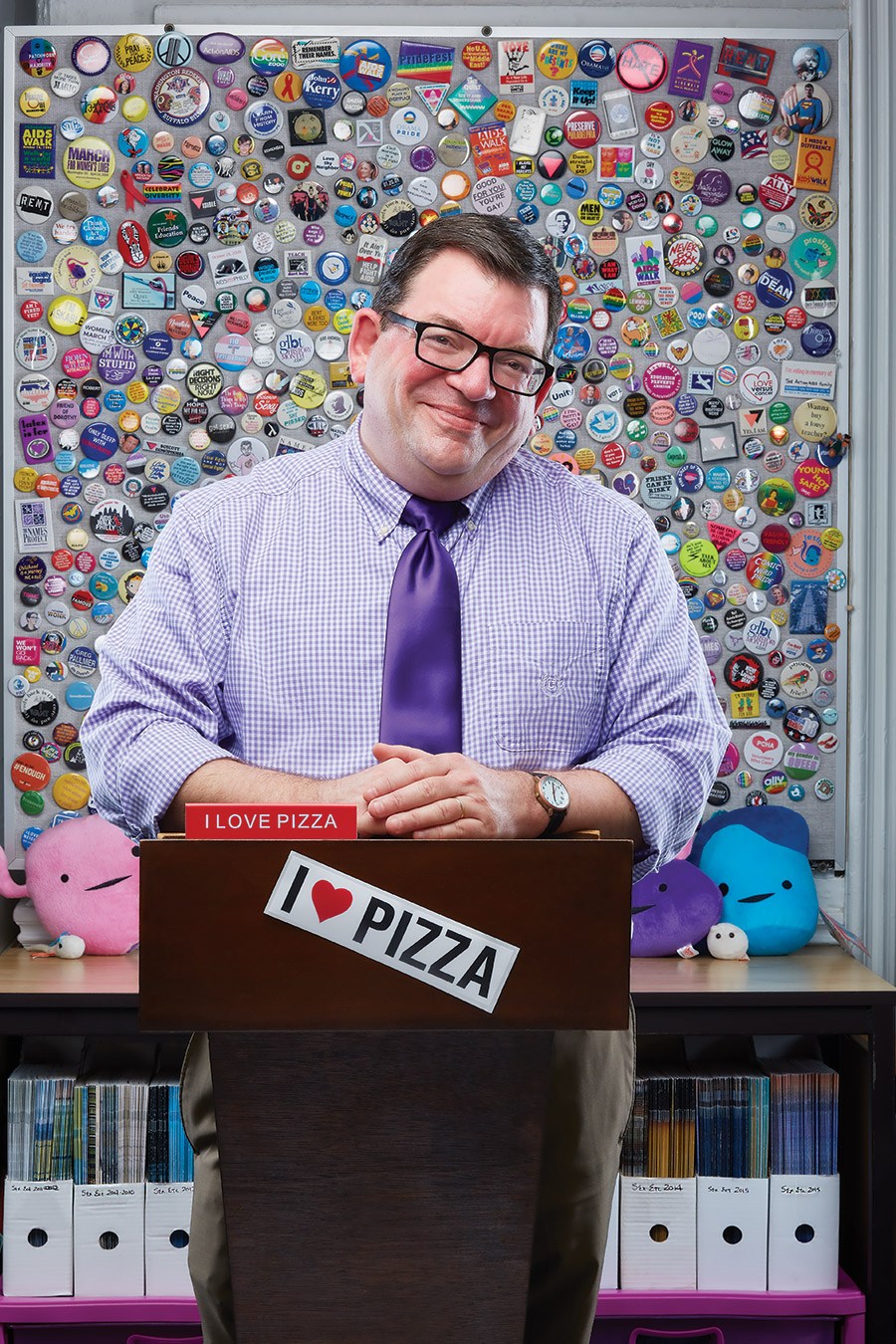 That’s where someone like Vernacchio could help. He’ll tell you that despite our culture’s obsession with sex, we’re completely lost when it comes to talking about it — especially with our kids. But the answer, he says, isn’t banning pornography.

It’s a warm day in April — the first of the year that feels like spring — and a chatty “Mr. V” welcomes his ninth-grade students as they file into his sunlit classroom. There’s a lot here to catch the eye. The walls are covered in pizza paraphernalia: plush toys, stickers, key chains. Atop the bookshelves are pillows shaped like testicles and uteruses. Then there’s the display of hundreds of colorful pin-back buttons with mottos like “Use condom sense!,” “Frisky can be risky” and “SEX — Talk with your kids about it!”

The school day is almost over, and the students at Friends’ Central sit in groups in their hoodies and jeans as an animated Vernacchio, wearing a long-sleeve lavender button-down and an eggplant-colored tie, approaches the topic of the day: What is sex?

“Imagine your friend just told you, ‘Dude, I had sex last night,’” Vernacchio says. “What activities would have had to happen?”

The kids discuss the cards for a few minutes, then slowly shuffle to the whiteboard, where they use magnets to display their definitions of sex. Every group has different answers, but they all agree on one requirement: penile penetration of the vagina. Vernacchio has a problem with this.

He offers a statistic from renowned sex researcher Shere Hite: Upwards of 70 percent of women don’t achieve regular orgasm through penile sexual intercourse. (Newer research puts that number even higher.) Then come the questions for the students: Why is defining sex by a series of specific activities problematic? If sex is defined as penile-vaginal intercourse, do gay men and lesbians have sex? Are you still a virgin if you “have sex” that you didn’t consent to?

Throughout the class, Vernacchio challenges the students to think about sex not as certain activities, but rather as the conditions under which those activities occur — and, perhaps most importantly, whether or not both parties involved enjoy them.

Vernacchio’s goal as an educator is to help students figure out what, exactly, sex means to them and provide them with the skills they’ll need to navigate healthy relationships and, if they choose, sex lives. Few classrooms approach the subject as thoroughly and openly as his does. Which is why, perhaps, his TED Talk, in which he advocates for using pizza (What toppings should we get?) as a healthy metaphor for sex — as opposed to baseball, which he says is problematic — has become so popular.

In 20 years at Friends’ Central, Vernacchio has become well known and highly regarded at the progressive, creative-minded private school. Laurie Novo, who’s worked at Friends’ Central (including as co-principal) for 25 years, says she’s never heard a single parent complain about Vernacchio’s classes. In fact, they’re so wildly popular — especially the 11th- and 12th-grade “Sexuality and Society” curriculum — that the school once had to hold a lottery for seats. Casey Cipriani, a 2001 graduate who took the course’s first iteration, says she recalls other students — and even her own mother — asking to read her homework.

Vernacchio begins every high-school class by answering anonymous questions submitted by students. When I visit his class in April, one of the queries is: What happens if you use a Hot Pocket as a sex toy? (Vernacchio deadpans: “It’s a waste of a perfectly good Hot Pocket.”) But for the most part, the questions are more sincere: I haven’t had my first kiss yet — is this a problem? (There’s no “right” age.) Is it normal to have a crush on more than one person at a time? (Perfectly normal.) What’s the average duration of sex? (Depends on your definition of sex.)

Vernacchio’s judgment-free (and slightly dorky) demeanor encourages even the shyest students to approach him. More than once, a student has told him a story of sexual assault — which he says is one of the hardest parts of his job, “an enormous responsibility” that he doesn’t take lightly.

Unlike kids today, Vernacchio didn’t learn about sex from the internet. He grew up in the ’60s and ’70s in a Roman Catholic Italian-American family in South Philadelphia. His parents raised him and his younger brother in a tiny rowhome near 10th and Bigler streets, in the Stella Maris parish. Pretty early in life, Vernacchio realized two things: He was gay, and no one (not his parents, not his teachers at St. Joseph’s Prep) was very interested in talking to him about it. He recalls only two “sex talks” with his parents: a hurried spiel when he was 13 from his mom, who called intercourse “the marriage act,” and, two years later, a lecture from his flustered father, who confused the words “masturbation” and “mastication.”

So Vernacchio, a curious kid who liked comic books and cartoons, spent hours in the library memorizing entries in the sexuality section. When he felt comfortable enough, he came out to his parents. He was 19, and the three of them were in the living room. They told him they loved him — and then asked him to talk to a priest. He agreed, under one condition: They also had to see a priest, but one that he would choose.

“We had dueling priests for a few weeks,” he recalls. “And then it just settled into silence.” His parents’ inability to discuss something so consequential is part of the reason Vernacchio is so open about sexuality today. “They missed out on a huge part of my life,” Vernacchio says of his parents, who are both deceased. “My parents did the best they could, and I don’t fault them.”

Vernacchio graduated from Saint Joseph’s University in 1986, the only theology major in his class, and later earned a master’s degree in human sexuality education at the University of Pennsylvania while teaching English and religious studies (which included sex ed) at St. Joe’s Prep.

After he was laid off with a handful of other St. Joe’s Prep teachers in 1993, he spent four years doing HIV/AIDS advocacy work. In 1998, missing teaching, he applied to Friends’ Central. Since then, he’s converted from Catholicism to Quakerism. He made the switch five years ago, he says, upon discovering that Quakerism and sex education are “speaking the same language: how to be your most authentic self, how to create authentic relationships, and how to leave the world better than you found it.”

Vernacchio opens his class in April with a quote often attributed to Oscar Wilde: “Everything in the world is about sex except sex. Sex is about power.”

The resolution that the state House passed in January posits that “children and youths are exposed to pornography that often serves as sex education” and calls for education to address the “epidemic.” In doing so, however, it highlights hypocrisy: Pennsylvania doesn’t mandate sex education in its public schools. (Only 22 states and Washington, D.C., do.) State law requires that public schools provide HIV education but not holistic sex education, which has actually been shown to reduce levels of teen pregnancy. In the past, state legislators have thwarted efforts to change that. In fact, a bill introduced in June 2017 by Representative Brian Sims that would require more extensive sex ed has yet to receive a hearing.

For these reasons and more, Vernacchio says the resolution isn’t going far enough to address the issue of pornography.

The issue of teaching students about sex often leads to fierce cultural and religious backlash, stalemating any type of overarching sex-ed policy in the United States. Big shifts in sex education have tended to occur on the heels of an advancement or a crisis — the introduction of the birth control pill in 1960, the HIV/AIDS epidemic of the 1980s.

In his 2015 book Too Hot to Handle: A Global History of Sex Education, Penn professor Jonathan Zimmerman writes that public schools are being forced to play catch-up in the internet era. Now, he wonders if the debate over pornography will lead to another sex-ed revolution — as the topic is of concern on both sides of the aisle.

“If we can get people of every political side to agree that there’s too much ugly and prematurely sexualizing imagery,” Zimmerman says, “and that our schools should have a role in trying to counter and control it, that would be the most promising bargain.”

Ultimately, Vernacchio’s approach to sex education is simple: If we can talk about sex, we can make smart choices about sex. Yet it feels revolutionary in a society that has largely failed to initiate the conversation.

As I observe Vernacchio’s class, I think of a 1912 quote from activist and suffragette Jane Addams: “The child growing up in the midst of civilization receives from its parents and teachers something of the accumulated experience of the world on all other subjects save upon that of sex. On this one subject alone each generation learns little from its predecessors.”

I can’t help but wonder: How will Vernacchio’s students talk to their kids about sex?

“When you do decide to have sex,” he says to his class, “I hope it feels amazing.”

Published as “Is Your Kid Porn-Literate?” in the June 2018 issue of Philadelphia magazine.