Sit-In Planned for Haters of the LOVE Park Redesign

Outraged by the lack of seating at the new JFK Plaza, a group of Philadelphians have planned a lawn-chair takeover on Tuesday afternoon. 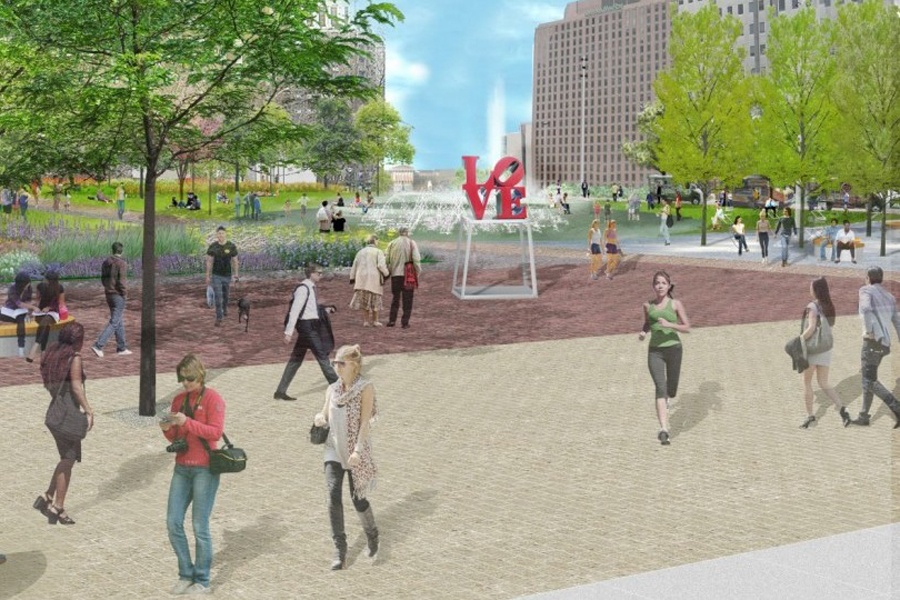 A 2015 rendering of the park’s redesign. Images: Hargreaves and Associates, KieranTimberlake and Philadelphia Parks and Recreation

It’s safe to say that the recent redesign of LOVE Park, one of Philly’s foremost public spaces, hasn’t been too well received by locals. The park (also known by its more formal name, John F. Kennedy Plaza) isn’t technically open yet — a rededication ceremony will take place on May 30th — but so far the reviews aren’t particularly favorable.

Dubbed a “granite Sahara” by Inquirer columnist Inga Saffron, the chief complaint among haters of the new-look LOVE Park is its paltry number of benches and lack of other seating, odd for a place that’s supposedly designed to foster public gatherings. I guess that dingy old fountain was good for at least one thing.

To highlight this questionable planning choice, a group of civic-minded Philadelphians will meet at the park on Tuesday afternoon to hold a lawn-chair sit-in. From noon to 1 p.m., likeminded malcontents are encouraged to bring a chair and pop a squat to show Mayor Kenney what this public space used to be good for.

The protest is not sponsored by any singular group or organization, and there is no agenda or planned programming. According to the Lawn Chair Lunch Takeover’s Facebook page, “It’s just invitation to join your neighbors in a public park that is, for now at least, decidedly BYO chair.” The only thing asked of participants is to keep things “family friendly and legal.”