Being Ben and Betsy: The Double Lives of Philly’s Historical Interpreters

We chat with actors Bill Robling and Carol Spacht about tourists’ questions, terrible shoes, and surviving a Philadelphia summer in colonial garb. 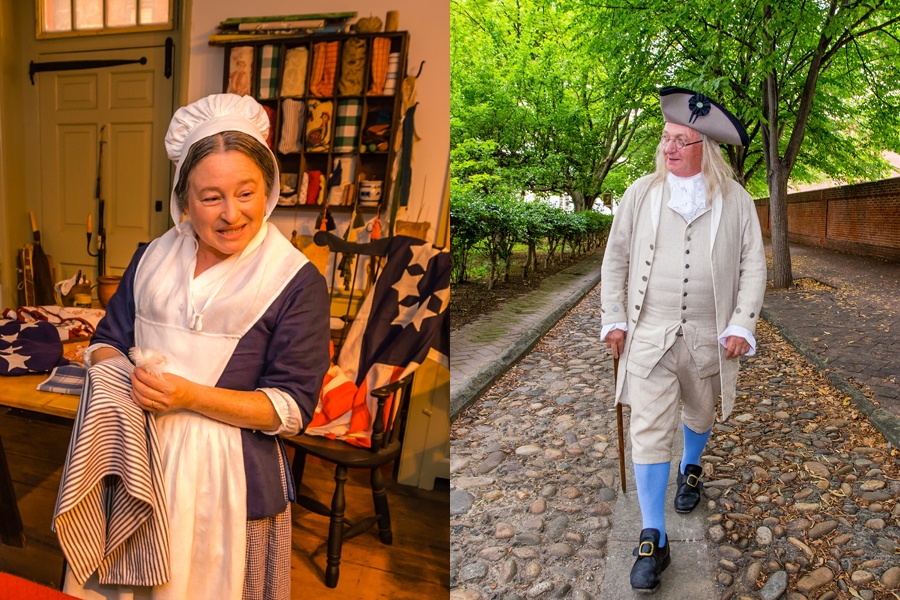 It’s mighty easy to get swept up in revolutionary fervor while walking the cobblestones by Independence Hall, especially once the tourist high season hits and a raft of interpreters in 18th-century garb portraying the famous and the ordinary alike call to you from soapboxes and lead educational tours of the city’s most historic area.

It’s typically an overly dramatic car horn that snaps us back to reality, where our minds readjust to the present and thoughts like “How can Ben Franklin stand this heat?” creep to the forefront as we remember that the interpreters are people just like you and me, except that they take off a three-cornered hat or bonnet at the end of a long day at the office.

While these figures are often hesitant to lift the veil and speak out of character, we were able to score two of Philly’s best (both deemed official by Historic Philadelphia, Inc.) to discuss why they’re still eager to wake up every morning and hop into somebody else’s shoes. 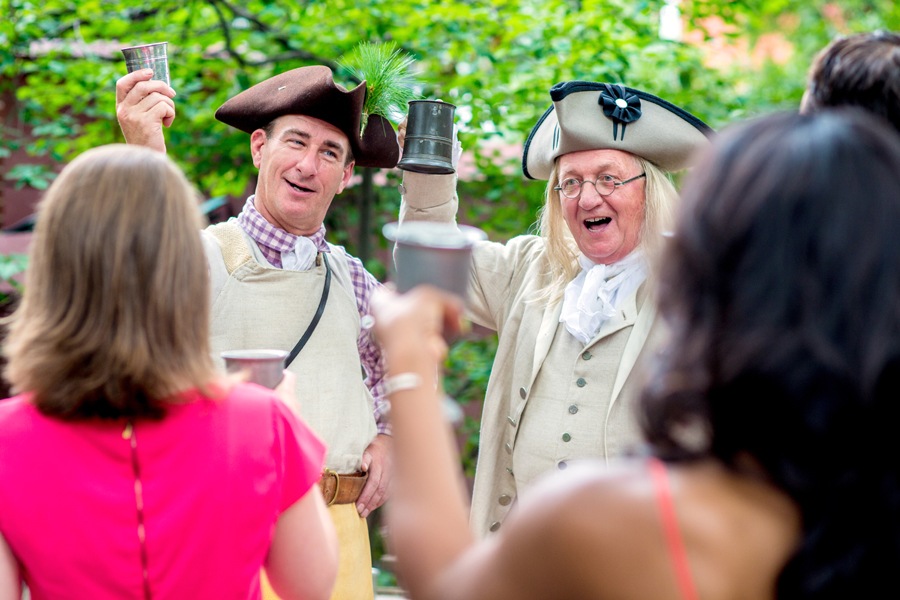 Is this your full-time job, being Ben?
Yeah, this is pretty much all I do. I’m an actor, so I do a few other things occasionally in the acting field, but being Benjamin Franklin takes up most of my time.

What percent of your life would you say you are Franklin vs. Bill?
Oh, I don’t know exact percentage, but it depends on the season, for one thing. Winters are a little slower sometimes. From about April through November its probably at least 50 to 60 percent of the day.

How is your job different from that of an actor on stage or screen?
I think any good actor is going to find their character and really know it. Obviously the more you interpret the life of one person, the better you’ll get to know them. The danger is you always have to remember that’s not who you are.

How long have you been Ben? There are several, right?
It’s been about 16 years, I guess. For the longest time there were just one or two. Now there are a few people who I think do it well and others who just spend a nickel on a costume and run around saying they’re Ben Franklin. But to those of us who take this seriously, we want to do it right. We want to get to know our characters, we want to know the times, we want to be in appropriate attire and such. There is no exclusive franchise on Ben — you can’t copyright Ben Franklin.

Is there a rivalry between you guys at all?
We don’t hang out, but for the most part I would say there is no real rivalry. There are a few of us who sort of regard each other as serious colleagues, but we certainly don’t hang together in costume.

What’s your favorite thing about being a historical reenactor?
I do love bringing the stories and people to life. I also love that what I do is not always the same. For example, the other day I had a session with a group of fourth-graders from Rochester, New York. I presented as Ben Franklin for half an hour, and then they asked me to talk about portraying Ben because they’re doing a class project, the musical 1776. So I talked to them as young actors, and that was great.

What’s the worst part?
Let me tell you, the shoes are uncomfortable. If I’m doing something near home — the Convention Center is about five or six blocks away — I’ll walk over and by the time I stand all day and walk back I’m ready to throw those shoes away! But I can’t, of course. 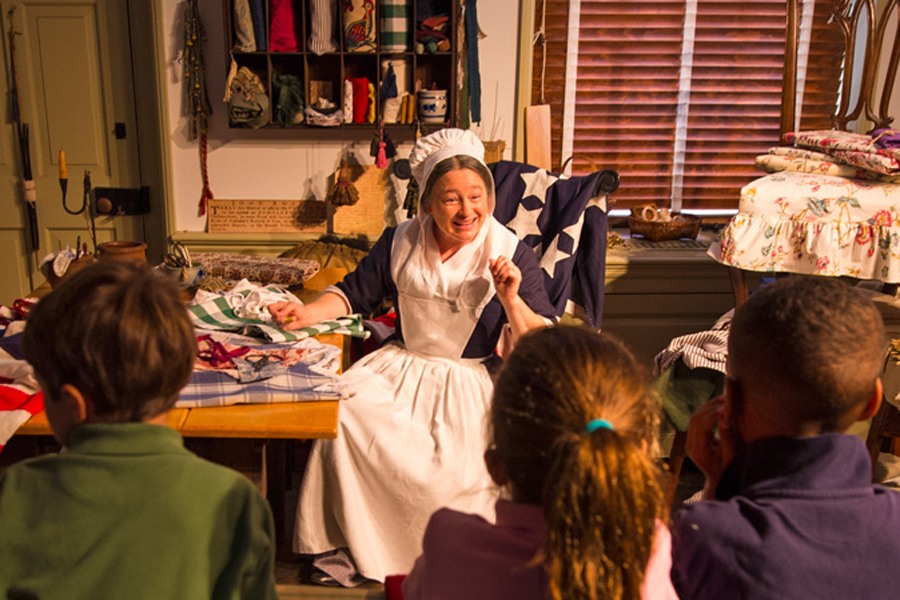 Are you a full-time reenactor?
There are all types of different terms. We usually call ourselves “historic interpreters.” Interpreter is a word we like to use because it’s a little more personal than just being a reenactor. Not that a reenactor isn’t personal, but they’re going to tend to be participating in battles, living history demonstrations like cooking, things like that. The difference as an interpreter is that we’re going to be assuming a real persona, so there becomes a personal intimacy we get to share because we are first-person. We want patrons to feel like they are actually meeting Betsy.

How does your acting background help in this line of work?
I have a definite bent in wanting to make people feel like they are experiencing history with a person who is from the past. That does not mean that we don’t need people who are historians, but there is an extra aspect we can bring to our interpretations by having a theater background. Something we say is its easier to teach an actor history than it is to teach a historian how to act.

What percentage of your day would you say you are someone else?
A really good percentage. Because, like many others, I play several different characters. Betsy is my primary one, and while I am in my 15th year with Historic Philadelphia, I actually came in already having portrayed Betsy for about 10 to 15 years before that. But over the course of time, I’ve also done Martha Washington, I have done Hannah Penn. I do Juliette Gordon Lowe, which is my newest character — she’s the founder of the Girl Scouts. All of these different women from history.

How important is the Betsy Ross House to your interpretation?
It makes a huge difference. It’s more of a challenge when you are trying to create a world for somebody to step into while having a conversation on a busy city street. And it’s not that you can’t do that, but it’s just much more of a challenge. I am supported by an entire atmosphere, so that’s my stage as well as my home. I get to be able to have people jump back into the past much more effectively because I do have the environment that supports me.

Are there other Betsys employed through Historic Philadelphia?
I have the lovely privilege of training these young girls as the senior interpreter. They are often, most times, coming from theater backgrounds and are stepping right into this role that is highly improvisational. The amount of study they have to do is considerable. They have to learn the facts, and they must learn how to sew. I’ve more than once had young Betsys come into the job never having sewn a stitch. They will leave four years later as accomplished sewers and will be able to make anything they would like, all by hand. That right there is an amazing skill.

What’s it like wearing period-appropriate clothing in the sweltering Philly summer?
We’re all hot, it’s 90 degrees and it’s Philadelphia. But you can springboard from that and take the obvious to talk about what the clothing is made of. The clothes we wear in the summertime often are made of linen, and that’s going to breathe better. Then we talk about the properties of linen, how it absorbs water, can sort of cool you down, and is lighter in weight. To be able to broaden the knowledge of people with a simple question like “Are you hot in that?” is great.

Whose idea was that great Super Bowl wager with Boston’s Paul Revere?
That was a brilliant thought that came from our publicist and our director at the Betsy Ross House, who had a relationship with Old North Church in Boston from different symposiums and things like that. They cooked up this idea of a challenge between Boston and Philly for the Super Bowl. Cari came up with a brilliant phrase of being an Eagles loyalist. From there it mushroomed. I took the stance that this would be a rip-roarin’ version of Betsy, one that would have a firm allegiance to the Eagles. I’m telling you, more than 700,000 people saw that promotion. It was astonishing. Old North Church flew the flag and admitted their defeat.