“If we were in Arkansas, we’d probably have no windows by now,” says the restaurant’s owner. 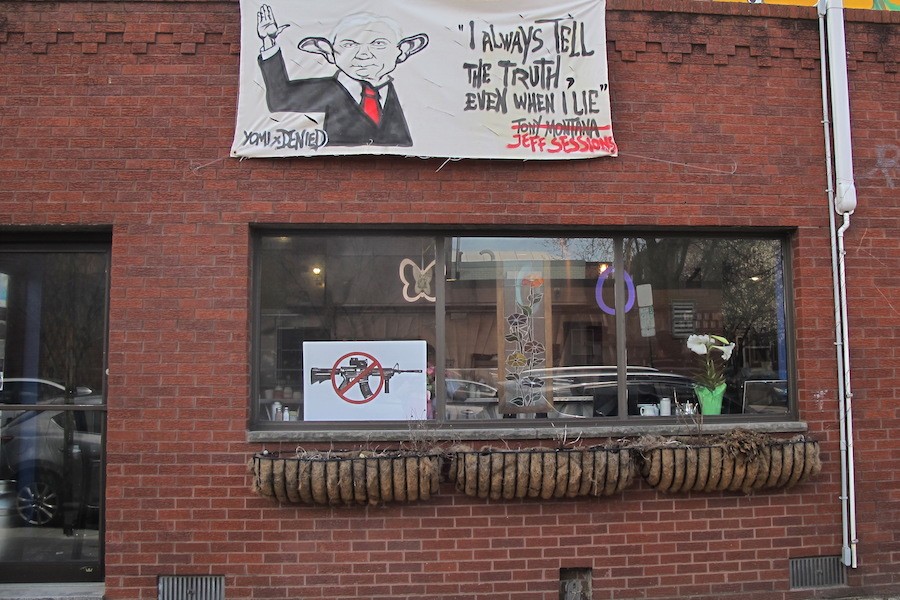 While most local businesses tend to stay out of polarizing political issues, there’s one South Philadelphia restaurant that isn’t shy about letting the world know where it stands.

Walk by Sam’s Morning Glory Diner at 10th and Fitzwater this week, and you’ll see exactly how the restaurant feels about guns. There’s an image of a menacing-looking firearm in the middle of a circle with a slash through it. There’s a handwritten sign that reads, “Girls’ clothes in schools are more regulated than GUNS!” and a computer-generated printout declaring, “One does not simply allow guns without regulation!”

And inside Morning Glory, the message is very much the same. The specials board doesn’t advertise the frittata of the day. No, the chalked proclamation it bears is: “No more condolences. We need background checks. No more thoughts and prayers. We need assault ban!” 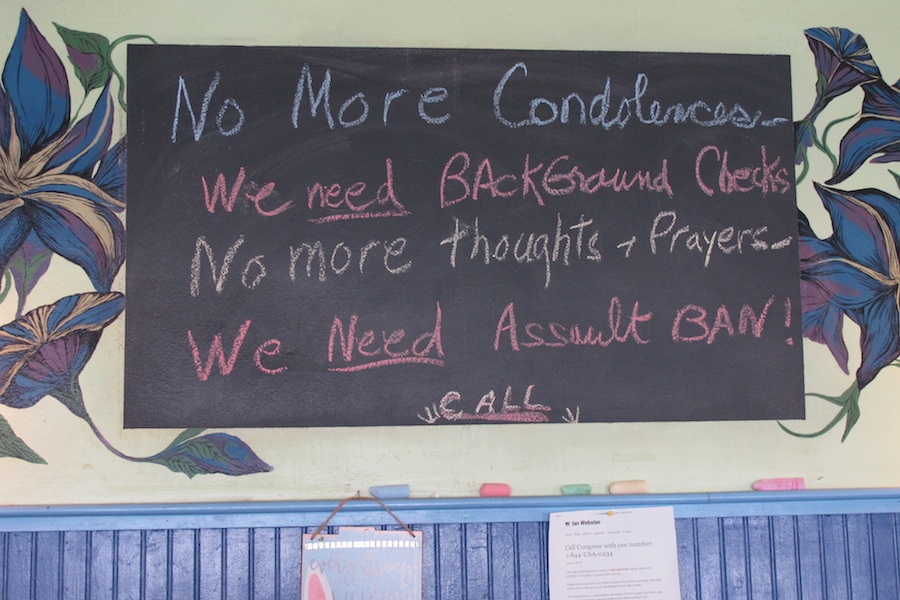 “Everybody who works here is on the same page with this stuff,” my server at Morning Glory told me on Thursday morning, a few minutes after he got a fist-bump from an older, well-dressed African-American man, who said he couldn’t agree more with the restaurant’s position on firearms.

“If we were in Arkansas, we’d probably have no windows by now,” says Morning Glory owner Carol Mickey, who took the restaurant over from her daughter Sam, who died of brain cancer in 2012.

It’s not just guns that Morning Glory has, well, targeted.

In 2015, the South Philly restaurant made news for a pair of special quiches it concocted in response to both the Supreme Court’s ruling protecting same-sex marriages and to since-deceased justice Antonin Scalia’s over-the-top dissenting opinion on that ruling. The specials were called “Scalia Is a Douche” and “The Supreme Court Finally Got it Right.” Both sold out in record time.

More recently, Morning Glory displayed pro-choice posters when Mickey (and many others around the country) became concerned that Roe v. Wade could, in effect, be overturned in this Donald-Trump-in-the-White House world.

“That drew a lot of ‘holy people,’” says the Port Richmond native, who grew up in the 60s and marched against the Vietnam War and for civil rights. “We got a lot of phone calls from them. It’s funny: Nobody ever says anything to your face. They call after they leave … But with abortion … I lived it. You didn’t. You had to live back then to know what kind of hell we were living in. I’d argue that point with my dying breath.”

And when I visited Morning Glory this week, the President of the United States had a special dish named in his, um, honor. The “Trump the Oligatch Frittata” will set you back $14. Add two bucks if you want bacon.

Mickey also gets the restaurant into the local politics game. Last year, she displayed pro–Larry Krasner posters when he was campaigning for district attorney.

One South Philadelphia resident, a lifetime NRA member, noticed the anti-gun signs a few days ago and posted a photo of the storefront to his Facebook page, later telling me that he had to seriously question the business model of a tiny neighborhood restaurant that so loudly proclaims where it stands on issues like these.

“When I saw their signs in the windows supporting Krasner last year, I had already written them off,” South Philadelphia resident Gabriella Iacovetti wrote in response to his post. “They’ll never see another dime of my business again. I often wonder how many people support things I don’t but are at least smart enough not to broadcast. I live in the middle of Virtue Signal Central.”

Iacovetti told me I could use her name in this article. But the man who posted the original photo said to leave his name out of it.

“I have a small business to run,” he told me. “I try not to mix the worlds. I have people who work for me, and I have a no-politics-at-work policy.”

In other words, he’s doing exactly what almost every other local business owner does: They keep their business out of the crazy, mixed-up world of national politics, because they are, you know, trying to stay in business.

“That’s a real shame,” Mickey said when I pointed out to her that she’s the only restaurant in the area that we could think of that so prominently displays its political beliefs. “We should all talk about it. We shouldn’t be afraid to do so. When you see the things going on today, we all need to get up and scream.”

Speaking of screaming, Mickey reports that, generally speaking, most of the negative responses that she’s had to her displays have been pretty civil.

“Once in a while, somebody will deface something on the restaurant,” she admits. “But we just laugh and say, ‘Oh, look: the Trumps were here.’”