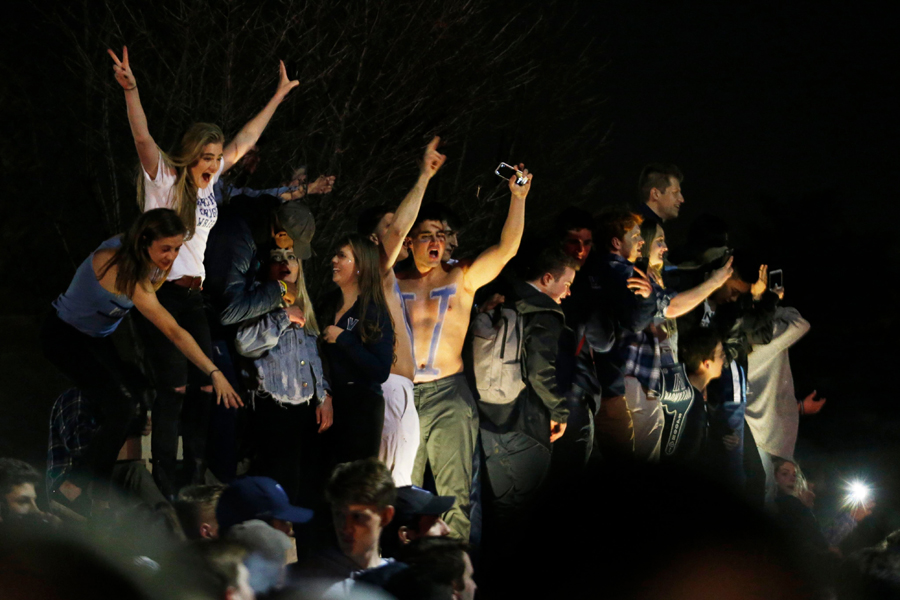 If you still think Villanova isn’t a “Philly” school, then you clearly haven’t seen the way these Main Liners party.

It was a scene particularly familiar to Eagles fans as students clad in Wildcats gear flooded the streets of Radnor in the wee hours of Tuesday morning and hung from greased poles on Lancaster Avenue. Metal street signs were ripped from their roots and hoisted high in the sky in honor of the tiny Catholic school’s second men’s basketball national championship in three years.

Safe to say, people were very excited. According to CBS3, Radnor Police Sgt. Joe Pinto said there were two arrests, but no other details were immediately available. Check out scenes from the wild ’Nova Nation celebration below.

Villanova University and @Villanova_Law will be closed Tuesday April 3rd.

Villanova fans start fire in the middle of the street….and then begin jumping over it.
(via @SInow ) pic.twitter.com/8Ua98XeEOt

Scene at the Villanova campus viewing party when the clock struck zero. pic.twitter.com/etVOD4AB0G

I think it’s safe to say classes at Villanova won’t be held as scheduled in the morning, or for sure attended sparsely if at all. @FOX29philly pic.twitter.com/jFON7KtgDG

White #Villanova fans have started a fire in the middle of campus. #NCAAChampionship

Never seen a celebration like this one Villanova just had on the Riverwalk pic.twitter.com/kNwAbXIbUB

Congratulations to @VUCoachJWright and @NovaMBB on another National Championship. Jay Wright is Best college BB Head coach in America. And one of the great things, he doesn’t cheat like many coaches in #NCAA. @SportsRadioWIP

Congrats to Villanova! Huge win! Best to Michigan too for amazing tournament. https://t.co/VYVajW4Q7u

"The Eagles won. Villanova won. The 76ers are going to win the championship." Charles Barkley is predicting the @sixers will continue the city's championship year. https://t.co/ytTJd59fyL pic.twitter.com/3jLRci85yq

VILLANOVA IS A BLUE BLOOD PROGRAM

Jim Nantz said what we were all thinking….Philadelphia has become “a city of champions”. I think we can safely say that this Villanova team is the greatest college basketball team in our area’s history. They absolutely ran away with this tournament!!!