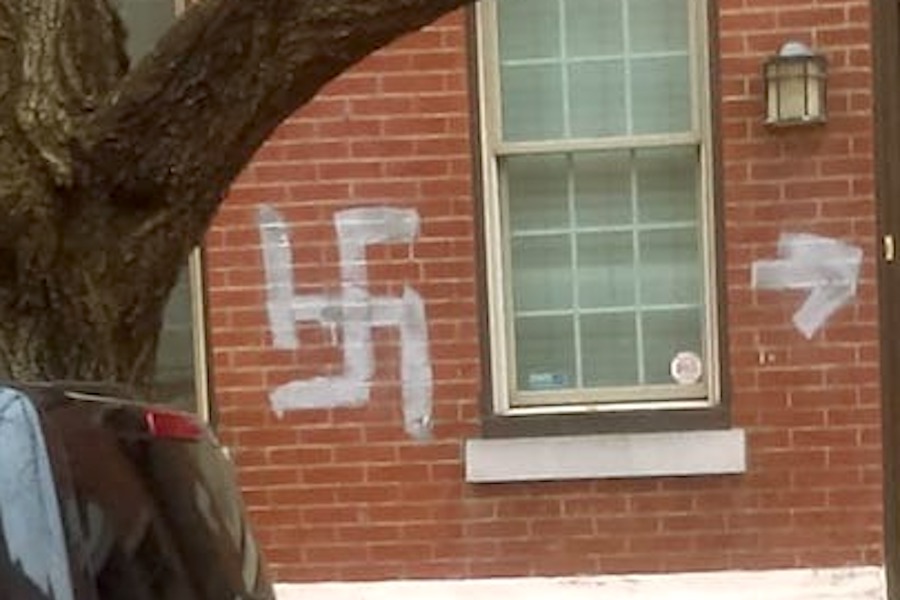 A swastika and other graffiti appeared on a house in Northern Liberties on Tuesday morning.

As the Philadelphia Police Department continues to investigate the swastika and other graffiti that appeared on a house in Northern Liberties on Tuesday morning, Northern Liberties Neighbors Association president Matt Ruben has released a statement on behalf of the organization about the incident.

Here is that statement in full:

The board of directors and several thousand members of the Northern Liberties Neighbors Association condemn, in the strongest possible terms, the anti-Jewish, Nazi graffiti painted on the front of a home on N. 4th St. in the early morning hours of March 20.

Northern Liberties is an inclusive community nourished by the contributions of people from all backgrounds and walks of life. This act of hatred and stupidity only redoubles our commitment to remain an open neighborhood that embraces the diversity of everyone who lives, works, attends school, visits, and patronizes businesses here.

Unfortunately, voices of hate in our nation have felt emboldened in the past year or so, as documented by both Philadelphia and nationwide statistics showing an increase in hate crimes. Today’s graffiti was an act of cultural terrorism, meant to frighten us, throw us off balance, and give the false impression that these hateful views are widely held or tolerated. But we will not let the perpetrator of this act change how we live, how we treat our neighbors, and how we affirm our values in word and deed.

We have been in direct contact with one of the home’s residents to offer support. We thank the City of Philadelphia for its immediate response: the CLIP service for quickly removing the graffiti, the 26th Police District and East Detectives Division for getting on the case, and the Commission on Human Relations for reaching out to offer assistance and information.

We know all Philadelphians of good conscience stand with us today, and join us in our commitment to repudiate hatred and bigotry not only with our words, but also by the example of how we live and thrive together, as a community, today and far into the future.

Anyone with information on the swastika in Northern Liberties is asked to call East Detectives at 215-686-3260 or the Philadelphia Police Department’s confidential tip line at 215-686-TIPS.