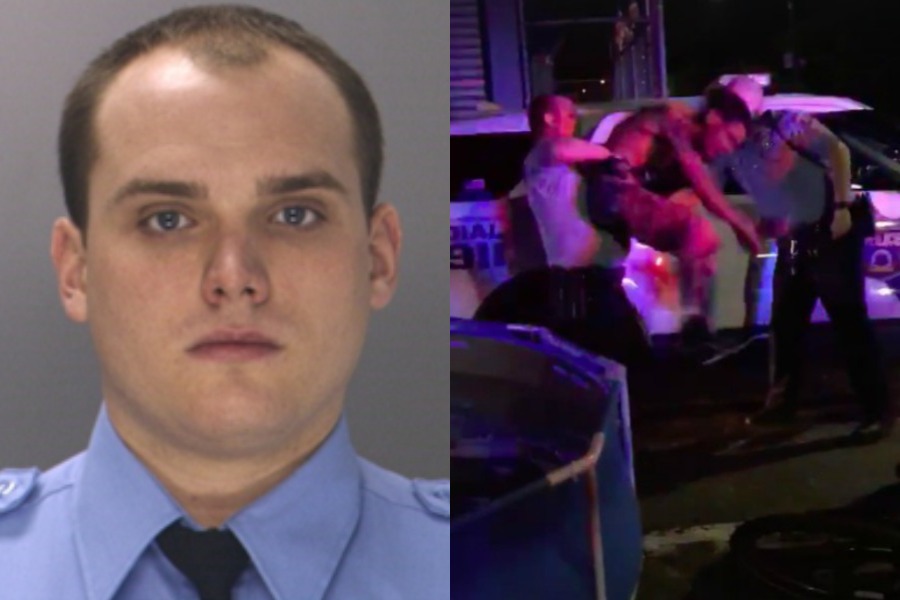 District Attorney Larry Krasner’s office has charged the Philadelphia police officer seen in a contentious arrest video that circulated online this past summer.

James Yeager, who had been with the police department for four years, was arrested on an aggravated assault charge on Thursday, seven months after he was fired over the incident in Kensington.

The three-minute video at hand, posted to Facebook by a resident named Ariel Rivera, shows 26-year-old Yeager and several other officers attempting to arrest a handcuffed man during a night-time pool party on the street. The man appears to be resisting arrest in the video. Yeager can be seen placing a baton under the man’s chest, picking him up from behind, swiveling around and dropping the man, whose head smacks against the side of the aboveground pool. The officers then place the man in a patrol vehicle.

It’s not clear what injuries the man suffered as a result of the incident. WHYY reported that he was transferred to Temple University Hospital in critical condition.

A spokesperson said at the time that the man was arrested for a narcotics violation.

In addition to aggravated assault, Yeager has been charged with official oppression, possession of an instrument of crime and simple assault, according to the Inquirer.

The video has been watched more than 572,000 times. Fraternal Order of Police Lodge 5 President John McNesby said the clip “does not tell the entire story” and that Yeager is “entitled to a fair hearing in the judicial system,” according to WHYY.

“And we look forward to officer Yeager being exonerated,” he reportedly added.

Krasner, who was sworn in in January, campaigned on cracking down on police corruption. A spokesman confirmed that this is the first time a Philadelphia police officer has been charged by Krasner’s office.

“The District Attorney’s Office is committed to the equal application of justice, including cases involving law enforcement officials,” spokesman Ben Waxman said in a statement. “Police officers must be held to the same standard as everyone else.

“That’s why our office approved charges against Officer James Yeager for aggravated assault and related offenses,” Waxman said. “After a careful review of all the facts, it became clear that his behavior was unacceptable and he needed to be held accountable.”