Kenney and Krasner: Criminalizing Crack Addiction Was a Mistake

Philly’s mayor and district attorney argued in an op-ed on Thursday that the city should prioritize help – not incarceration – for those experiencing addiction. 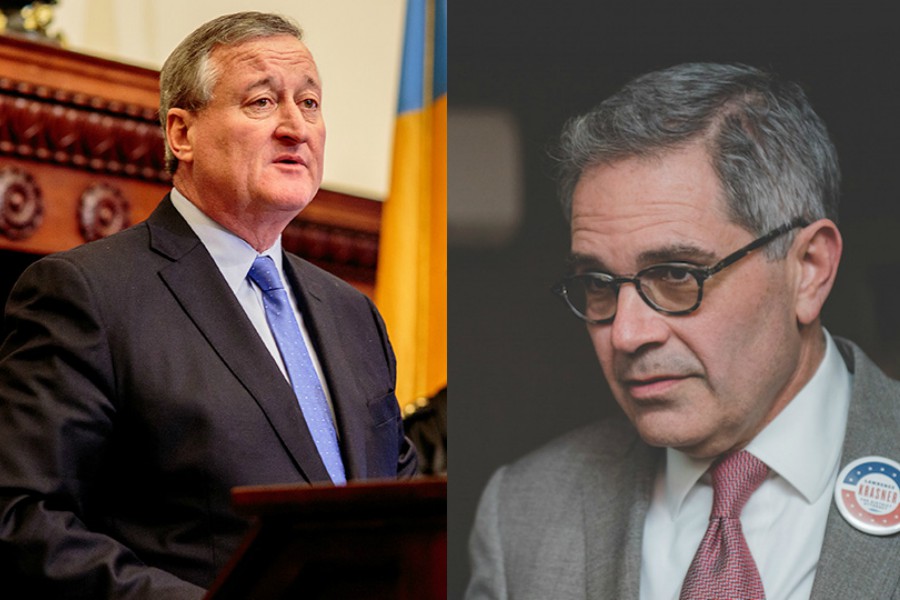 Philly Mayor Jim Kenney and District Attorney Larry Krasner declared on Thursday that criminalizing crack addiction in the 1970s and ’80s was a mistake.

In an op-ed published on Philly.com, Kenney and Krasner argue that the so-called “War on Drugs” enacted by state and federal government 30 years ago – during the height of the crack epidemic – unjustly targeted people of color and low-wealth communities. The duo claims that “tough on crime” policies associated with the nationwide war on drugs resulted in Philadelphia having the highest incarceration rate per capita of any major city in the country.

“As a society, we failed many people during the crack epidemic by treating it solely as a law enforcement problem rather than a health problem,” Kenney and Krasner write. “Many people spent time in jail when they should have spent time in treatment. … Race determined how the country, as well as the Commonwealth of Pennsylvania and the City of Philadelphia, responded to the devastating crisis.”

Now, Kenney and Krasner want to ensure that the city takes a less law enforcement-centric approach to combating the city’s opioid epidemic. The stakes are high: Last year, overdoses claimed roughly 1,200 lives in Philly – four times the city’s murder rate. Kenney and Krasner say the crisis has “stressed our EMS system to the brink … created ongoing challenges within our Prison System” and contributed to the city’s homeless population.

Kenney and Krasner ultimately use the piece to renew their push for a Comprehensive User Engagement Site, known elsewhere as a safe-injection site, which the city officially endorsed last month. At a CUES (which would be paid for and managed by private entity, not the city), people experiencing addiction could use drugs under medical supervision, in the hope that overseers could prevent fatal overdoses. And, as Kenney and Krasner repeatedly stress, a CUES would connect people in addiction to treatment and resources for housing and meals.

“When we talk about the crack epidemic and what happened, we lost a lot of families,” Councilwoman Cindy Bass offered. “We lost so many people.” — What happened at a North Philly meeting about safe injection sites via @billy_penn : https://t.co/u5dhMgaVux

The duo call CUES “one part of a multi-component strategy to deal with the opioid crisis, along with efforts to prevent drug abuse, help drug users get into treatment, and help the homeless obtain housing.”

Their op-ed comes in the same week that City Councilwoman Cindy Bass announced a multi-prong plan largely packaged as an alternative to opening a CUES. Bass, who is leery of safe injection sites, is mainly calling for a revamping of outreach and prevention techniques used by the mayor’s opioid task force. Like others, she believes that the city must first acknowledge and attempt to fix the injustices faced by Black and brown citizens during the crack epidemic.

.@PhillyMayor publicly admitting that the city's "war on drugs" approach to the crack epidemic is a big damn deal. Speaking to the racial disparities in particular confirms a sincere paradigm shift in how Philadelphia will move forward on addressing drug crimes. I'm proud.

To do so, Bass thinks the city should consider expunging the records of some people who were convicted of low-level drug offenses during the height of the crack epidemic. For that idea, Bass has tipped her hat to journalist Solomon Jones, a vocal proponent of CUES. Jones has asked city officials if they would consider expunging past low-level drug convictions, just as San Fransisco did after California legalized marijuana.

In an column on Wednesday, Jones wrote that “people of color must not support safe injection sites, especially if those sites are not accompanied by a comprehensive plan to right the wrongs of the crack era.”

“Blacks were criminalized for the same thing that our city now proposes supporting for mostly white heroin addicts,” he continued. “And if others are to be treated with compassion, we want our prisoners released, we want our records expunged, we want our property returned, and we want our communities made whole.”

Philadelphia must follow San Francisco’s example and repair the damage done to black and brown communities in the drug war. Tune in to @PraisePhilly 107.9FM at 10 am! pic.twitter.com/PfcdTuAK52

City officials have indicated that expunging such records could require a change in state or federal law. DA Krasner has not weighed in on whether or not this is an idea he will pursue. A spokesperson for Krasner did not immediately return a request for comment on Thursday.

In their op-ed, Krasner and Kenney acknowledged that more white people are dying from overdose in Philly than people of color. Still, they noted that in 2016 and 2017, more African Americans in Philly died of overdoses than of homicide. Roughly 398 (43 percent), of the 907 overdose deaths recorded by the Medical Examiner’s Office in 2016 were people of color.

Krasner and Kenney wrote that while the city “can’t undo years of regressive policy, we can take an intentional approach to treating addiction and drug-related law offenses with that history in mind.”