Welp, It’s Only 10 and People Are Already Hammered at the Eagles Parade

There goes Mayor Kenney’s theory. Let's just hope that the sane majority rules, as it did after the Super Bowl. 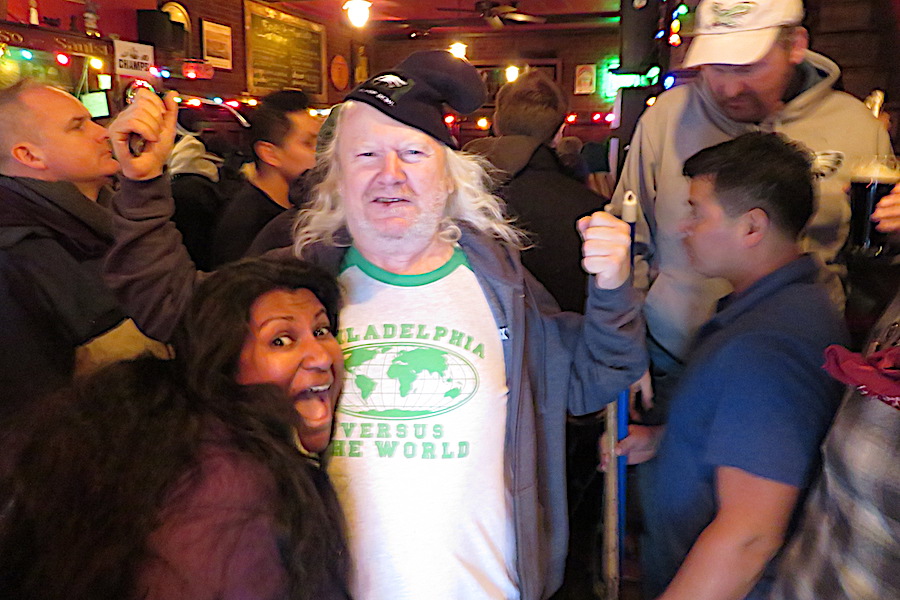 Philly bar owner Fergus Carey inside Fergie’s Pub at 9 a.m., just after they stopped letting more people in. (No, Fergie was not drunk. At least we don’t think so …)

I don’t know about your kids, but mine had school today. My wife (that’s her striking a pose with Fergie) and I discussed whether to let our kids take off to come to the parade. I’m glad we didn’t.

On my short walk from the 13th Street stop on the Septa Route 10 trolley to Fergie’s Pub on Sansom Street just before 9 a.m., I passed plenty of people who were obviously drunk. A couple were barely able to walk. There was marijuana being smoked. (I enjoy the stuff, too, but before 9 a.m.???) And it is, no doubt, only going to get worse.

Mayor Jim Kenney said that police will be confiscating any alcohol seen on the street. And based on my observations, the cops are going to have a busy day. I spied people drinking out of aluminum beer cans, one guy drinking from a 40, and there was one guy on Chestnut Street who tossed an empty beer bottle onto the ground.

This was all in the ten minutes it took to wade through the crowd between 13th and Market and 12th and Sansom. By the time we got to Fergie’s, in the moments just after 9 a.m., the bouncer was in the middle of announcing to folks standing outside that they were shutting the door, that they couldn’t let more people in.

I am one of those people who actually agree with Mayor Kenney about the events after the Eagles won the Super Bowl. By and large, people behaved themselves and it was a relatively small number of “knuckleheads” causing problems.

But Mayor Kenney also said, laughably, that the Sunday night celebration was different, because there you had people drinking all day. At his press conference earlier this week, he told reporters that he couldn’t imagine that people would be drinking a lot before the Eagles Super Bowl parade. After all, it starts in the morning.

Are ya kidding me? Has this guy never been to a Mummers Parade?

Anyway, I’m hoping that all goes well today and that the national press will have nothing bad to report. But when a guy stuffs horse poop into his mouth or some ding-a-lings decide to flip over a car, well … if it bleeds, it leads.

Behave yourselves, Philly. Don’t break anything that isn’t yours.