Your Survival Guide to the Eagles Super Bowl Parade

The parade starts at 11 a.m. on Thursday. To help prepare you, we’ve answered your most burning questions. 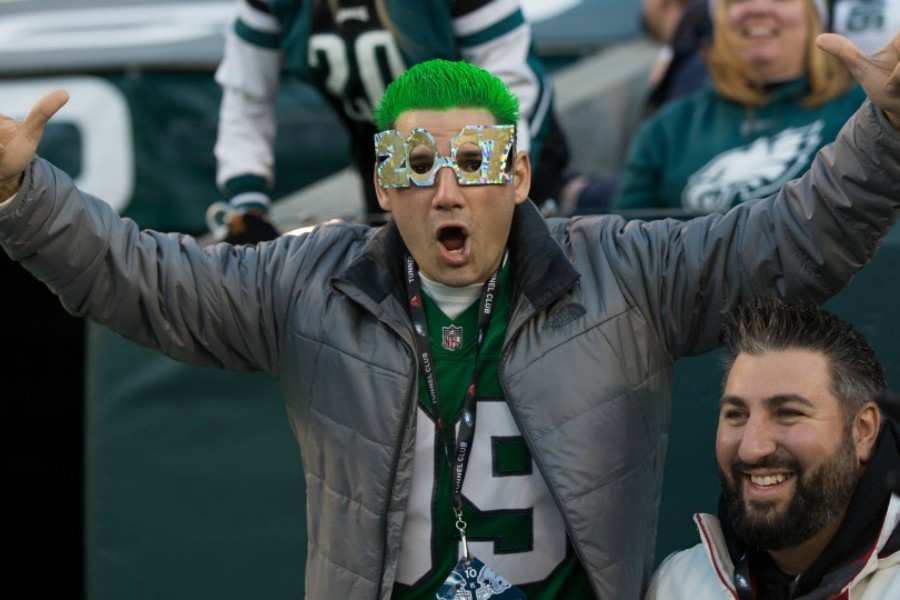 You’re going to see a lot of this guy on Thursday. | Photo by: USA Today Sports.

You might be feeling a tad anxious. Or overwhelmed. Or maybe just downright excited. Chances are, it’s a combination of all three.

To help prepare you for the eagerly anticipated Eagles Super Bowl parade – which is expected to bring larger crowds to Philly than Pope Francis’s visit in 2015 – we’ve created a handy survival guide. It includes how to get to the parade, where to watch the celebration, how to dress, what to expect of the portable toilet situation, where to eat and drink nearby, and, of course, how to get your hands on some freebies.

What do I absolutely need to know?

We’ve got official parade information, including the route and what to expect, right here.

To summarize, the parade will leave Lincoln Financial Field at 10:45 a.m. on Thursday and officially begin at 11 a.m. at the intersection of Broad Street and Pattison Avenue. It will then head northbound on Broad Street to City Hall and snake left around City Hall before making its way to the Benjamin Franklin Parkway and continuing to Eakins Oval and the Philadelphia Museum of Art. There, a celebration (with speakers) will run between 1 p.m. and 3 p.m.

What to expect? A motorized, open-air procession with lots of “surprises,” according to city officials, as well as a “dramatic” and “fantastic” lineup at Eakins Oval.

But wait – how do I get there?

For the most part, that depends where you’re coming from. If you’re one of the many suburbanites flocking to the city for the event, you’re probably looking to take Regional Rail or – if you have to – drive.

If you’re driving, know that traffic in the vicinity of the parade will be extremely congested, and parking in the city will likely be an issue. We have a list of parking restrictions and road closures. Either way, be sure to leave early and give yourself plenty of time to spare.

If you’re taking Regional Rail, plan for a potentially messy experience. The train system was disastrous during the Phillies World Series parade in 2008. In attempt to prevent history from repeating itself, SEPTA will only operating specific Regional Rail stations (30th Street Station and Jefferson Station in the city) and offer, for the most part, only inbound service in the morning and outbound service in the afternoon. For more information, visit SEPTA’s website.

I live in the city. What will public transportation be like?

Your best bet on Thursday – if you don’t have a bike – is to take the Broad Street and Market Frankford El subway lines everywhere you can: They’ll be FREE! (Thanks to a sponsorship by Independence Blue Cross.) Trolleys and buses will still operate – but 27 bus routes will be detoured. Again, visit SEPTA’s website, and check the System Status page for more information.

Where can I get the best vantage point?

There are two main features of Thurday’s parade: the actual parade, which will stretch five miles from South Philly to Eakins Oval, and the speaker-filled celebration starting at 1 p.m. at the Philadelphia Museum of Art. Your best vantage points depend on which of these you want to see more.

If you want to see the parade, arrive anywhere along the route EARLY to ensure you get a good spot. Know that barricades will be set up along the roads, so you won’t be able to get up close and personal. Know a friend who has a high-rise in the city? We suggest you camp out there. Otherwise, it seems like a great day to visit the One Liberty Observation Deck, SkyGarten or R2L Restaurant, if you’re feeling fancy.

If you don’t have access to a rooftop space, fret not: There will be 14 Jumbotron TVs set up alone the parade route, mostly on the Benjamin Franklin Parkway and Broad Street. Try to claim a spot in front of one of those if you don’t want to brave the massive crowd at the steps of the Art Museum.

We suggest you pack a lunch for the day if you’re going to be out there for a while. Officials say food and water bottles will be allowed at the parade and at the celebration. Otherwise, about 40 food trucks will be set up along the Benjamin Franklin Parkway.

If you want to eat well and don’t mind popping into a restaurant during the parade (or if you want to get a bite to eat afterward), may we suggest our guide to early openings and killer specials on food and drink in the area?

What if I want to eat and drink things for free?

It’s your lucky day. You likely know by now that Bud Light (perhaps regretfully?) offered Philly free beer if the Eagles won the Super Bowl. Which they did. So you’ll be able to get a Bud Light (a single Bud Light, mind you) at nearly all of the bars along and near the parade route.

In the food department, Shake Shack will give out free scoops of Swoop’s Scoop custard (which is green vanilla-flavored and topped with frosted chocolate cake) all day on Thursday.

Can I bring my own alcohol?

Do with that information what you will.

The city will have at least 840 portable toilets set up. If the crowd hits 3 million, that averages out to be about one toilet per 3,529 people. So good luck. We suggest … well, using the bathroom before you leave the house. And maybe ducking into a cafe or cafe shop in whatever neighborhood you’re in.

It’s going to be really cold. How should I prepare?

Layers, layers, layers. The high tomorrow is expected to hover around 33 degrees Fahrenheit. It won’t be rainy or snowy, but it will be freezing. Dress for the weather. That means scarves, gloves, hats, double-layered socks, etc. You’ll probably want to stock up on hand and foot warmers too.

Keep in mind that you’ll be walking a very long distance (five miles!) if you plan to follow the entire parade. Wear comfortable shoes.

Will I be able to use my phone?

If you were in town for the 2015 papal visit or the 2017 Women’s March, you probably know that getting phone service in large crowds can be tricky. The good news? Wireless companies are rolling in extra service – via trucks – for the parade. So we think (or hope) we’ll be covered.

You will want to bring phone chargers – especially portable ones – if you plan to attend all day, though. Especially since phone batteries tend to perform worse in the cold.

Is this really a family-friendly event? Or will it look more like Sunday night’s rowdiness?

This is absolutely a family-friendly event! Don’t like wild fans deter you.

For starters, the event will kick off in the morning, so hopefully (maybe?) people won’t be as drunk as they were after the Eagles won the Super Bowl around 10 p.m. on Sunday (not that we’re putting a little day drinking past Philly).

If you do plan to bring your kids, be sure to keep them in sight and close at all times. If you lose a family member, look out for a family location sign in the area. The city will set up several signs along the parade route. It also helps to establish a monument or location where you can meet if you lose each other.

I want to stay in-the-know at all times tomorrow. What should I do?

Also, consider signing up for emergency text alerts through the city. To do so, text “ReadyEagles” (one word, no quotes) to 888777.

And now, Eagles fans, go forth and have fun!