Here are the best photos and videos from Sunday night … because you’ll probably want to relive it forever. 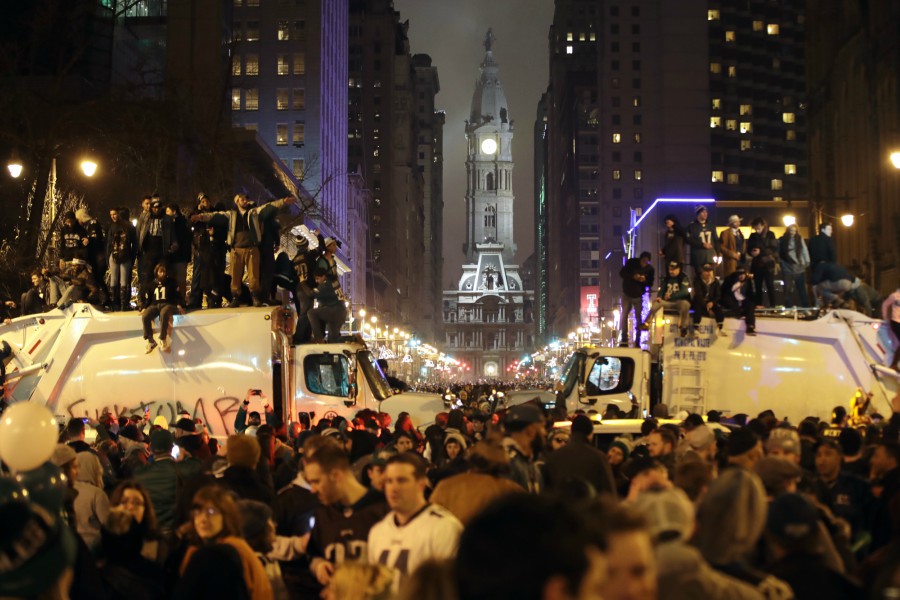 At long last, Philly has proven itself.

We took down the Patriots. We took down Tom Brady. When we celebrated, we took down an entire hotel awning … and hoisted a keg atop the gates of City Hall.

They said it couldn’t be done – that we were underdogs – but we did it. We won the Super Bowl. Broad Street was jam-packed and wild and full of green on Sunday night. There were celebrations … and destruction. Somehow, our city is still standing today.

Here are must-see photos and videos from a night the city will remember forever.

Let’s start with backflips off the Ritz awning:

The Ritz canopy has collapsed pic.twitter.com/9LBolLtIPY

The gates of Philadelphia’s City Hall. Yes, that’s a keg on its way up. pic.twitter.com/JSANa3Wodw

Needless to say, there were conquered light poles:

Hang this in the art museum pic.twitter.com/pO0KlF3hjg

And light poles torn from the ground:

fans in philadelphia yanking down a street light during their #superbowl celebration #flyeaglesfly pic.twitter.com/vsIpre75jY

They ripped the dang steeet poles out of the ground pic.twitter.com/af6ccASHTA

TIMBERRRRR at the foot of Philadelphia’s City Hall (Wait for it in the background) pic.twitter.com/lvlifaP5yl

Which (embarrassingly) turned into photo opportunities:

There were fireworks in the street:

The subway was lit:

#NOW @eagles fans flip a car outside the Bellevue! Come on guys! Celebrate responsibly!!! Police are guarding the car now on its side @PhillyPolice @6abc @Eagles pic.twitter.com/zDYnDwNaVk

Philly not chilling after this Super Bowl win pic.twitter.com/cSoVYa4QWL

Things may have gotten a bit out of hand pic.twitter.com/N6iyEaXb64

The Eagles won the Super Bowl — and Philly is going nuts pic.twitter.com/c5csc4e9z1