How a Stupid Latex Dog Mask Saved the Eagles Season

Chris Long came from out of nowhere with something that Eagles fans — and the city — could latch onto. 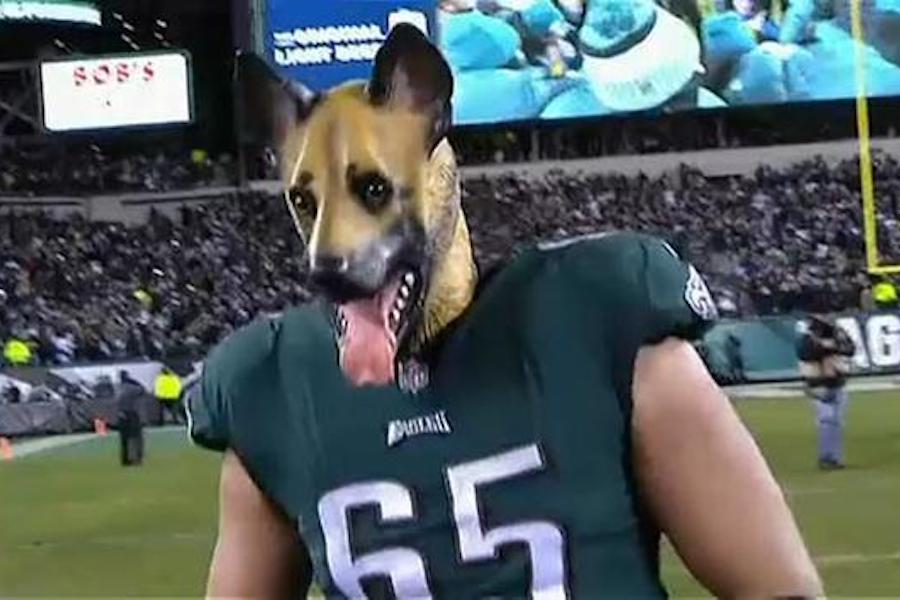 Chris Long might not have seemed the most likely savior for Philadelphia sports fans.

Granted, he’s football royalty — son of Hall of Fame defensive end Howie, brother of Bears offensive lineman Kyle and Raiders scout Howie Jr. — and a consistent Pro Bowl alternate. But this is his first season with the Eagles, and up until the January 13th game against the Falcons — the division championship playoff that saw the Birds as 2.5-point underdogs to Atlanta — he was better known for good works (like donating his entire season’s salary to charity, and founding a nonprofit that builds wells in Africa) than for game-winning heroics.

Career highlights up until that point? Recovering a fumble and running it back for a TD way back in 2013, and getting held by a Falcons offensive lineman on a crucial play in last year’s Super Bowl. The subsequent foul call moved the Falcons out of field goal range and kicked off the thrilling (or disheartening, depending on your viewpoint) comeback in what’s been called the greatest Super Bowl of all time, the overtime win by Long’s team at the time… the, um, New England Patriots.

But in January, as Long came off the field after the Eagles’ 15-10 squeaker against the Falcons, he and offensive lineman Lane Johnson whipped out full-coverage dog masks and began to bark at the exultant crowd — a stunt prompted, Long later explained, by the Birds’ underdog status.

His German shepherd headgear instantly became a symbol of the team’s unlikely triumph. For the following week’s thumping of the mighty Vikings in the conference championship, Lincoln Financial Field was stuffed with canine masks and t-shirts and signs and the like.

On December 10th, the city’s new It Boy, quarterback Carson Wentz, suffered a season-ending tear to his ACL against the Rams. The Birds limped to a win in that game, won two more close ones with Nick Foles at the helm, then lost on New Year’s Eve, 6-0, to the hated Cowboys, in a stinker of a game.

Without Wentz, they were a team without an identity or a figurehead. Foles is a very nice man, but he’s never been the sort of guy who sets a locker room on fire. Ditto coach Doug Pederson, a perfect ringer for your cute-but-dumb high-school boyfriend. Malcolm Jenkins, who is a natural team leader, was caught up in the controversy over the NFL and politics.

A number of other key players in this unexpectedly successful season —
Jay Ajayi, Corey Clement, Mack Hollins — were team rookies, still too new in town to have captured fans’ hearts completely. Others — Brandon Graham, Jason Kelce, Fletcher Cox — have been around so long that we take them for granted. And some — Nelson Agholor, we’re looking at you — had broken those hearts so many times that we were leery of loving them again.

So into that void prances our very own Pound Puppy, barking and howling at the head of the pack, encapsulating an entire city’s natural view of itself in a single brilliant move. Of course, because Long’s Long, he put his own spin on the thing, donating all the proceeds from sales of his “underdog” shirts and masks to Philly’s school district — to the tune of more than $100K. Oh, and he managed to shame the NFL into kicking in the proceeds from its knockoff underdog gear, too. When’s the last time anybody shamed the NFL into anything?